An online tribute to Mackenzie Watts describes how she “made the people and world around her better.”

The Howell swimming and diving community continues to work so that her memory makes those who come after her safer as well.

Watts died in 2005 after suffering a cardiac arrhythmia. She was a 15-year-old sophomore and key cog on her high school team.

This past weekend, for the sixth straight season, the Highlanders hosted the Kenzie Classic, an invitational that served as a fundraiser for the Howell program and annual Mackenzie Watts scholarship – plus served to promote heart screenings by local National Diagnostic Services in their “HeartMobile” parked outside the pool.

Tests are ultrasound-based and non-invasive, and include an EKG to examine the heart’s electrical system for arrhythmias and an echocardiogram to examine the heart’s structure in case there is a thickening of the muscle (known as hyperthrophic cardiomyopathy). Adults were charged $199 and students $75, with discounted rates for adults in groups and children.

Click to check out coverage of the event from the Livingston County Daily Press & Argus.

While tracking down 660 football schedules (give or take a few) took up most of the summer, there still was time for a few additions to the MHSAA record book – with more to come.

Track and field fans will notice records from retired yardage events (pre-1982 or earlier depending on the MHSAA class) have been added to the online records here for boys and here for girls.

Cross country fans should check out our lists of top MHSAA Finals times for every division and every class, plus overall top 10 lists for both boys and girls since the race was set to five kilometers in 1980. Click here for girls and here for boys.

Also added or updated were team championship counts for both cross countries, volleyball and girls golf. Click to check out girls golf here and volleyball here.

It has been 30 years since former Genesee all-state running back Don Robinson became the fourth player in Genesee County history to run for more than 300 yards in one game – which he did in gaining 317 on Sept. 23, 1983. 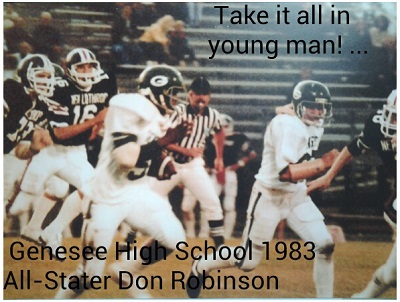 High school football and those memories remain close to his heart even after going on to play at Eastern Michigan University, a stint in the U.S. Navy and a move to Georgia.

He’s paid attention over the years as that “300 club” has grown to 22 players including current New Orleans Saints back Mark Ingram, Jr., and the University of Michigan’s Thomas Rawls.

He’s also a regular reader of Second Half, and asked to send along some words of wisdom to those who will be taking the field to begin the season this weekend:

“When you run out onto the field this season, do me a favor. At least once, pause.

“Look around you. Look at the lights in the sky. See the faces of those that have come to see you play. Listen to the band and the cheerleaders. Look into the eyes of your teammates ...

“Take it all in. When you’re older and miss this amazing game that you are playing, you’ll be glad you did.”