Recruitment of new high school officials to eventually take the reins from those currently conducting MHSAA events is a challenge faced all over Michigan.

The Jackson Area Officials Association is working to restock its ranks by recruiting directly from local schools and developing them with help from veteran mentors.

Eight new officials – ages 15 to 24 – who worked a series of youth and middle school games together earlier this month, are among those who have been introduced through a program that begins with a meeting at the end of the high school basketball season between JAOA official Bill Walker and local athletic directors, coaches, fellow officials and other young adults he’s made contact with over the course of a season. From that meeting, Walker builds a list of potential candidates to become officials and then invites them to the annual JAOA Legacy Camp in June.

The camp includes two days of scrimmages between local teams, plus classroom and mechanics teaching. Similar to the MHSAA Legacy program, new officials are paired with veterans, and clinicians evaluate their work during scrimmage play. Walker then keeps in touch with the new officials during the rest of the summer, plugging them in for local youth tournaments and scrimmages, and uses as many as possible while assigning officials for youth tournaments over the winter.

All eight officials who worked the event this month are part of the JAOA legacy partnering, and some of the group already are working games at the junior varsity level – with one, a 19-year-old, recently completing his first varsity game. They come from a variety of Jackson-area schools – Parma Western, Napoleon, Jackson Christian, Michigan Center, Concord and East Jackson. Walker said the recruiting effort has a 60 percent success rate so far. (This June’s legacy camp will be the third.)

“By next season, all (eight) will be official MHSAA registered officials,” he said, noting most currently are registered. “It’s great to have these schools support this program. We all benefit from added, good officiating.”

Our Battle of the Fans trip to Charlotte on Friday included a conversation about a Feb. 2 game between the Orioles and Mason, which has a pair of athletes fighting cancer. The Charlotte student section dressed in blue that night in support of junior Storm Miller, and during halftime passed buckets to raise money for Miller’s GoFundMe account set up to help pay for his care.

Mason, in turn, provided support Friday to an Owosso alum, 2012 graduate Cody Greger, who remains hospitalized at University of Michigan’s hospital with injuries sustained during a house fire in November. Fans and students collected donations to assist Greger’s family with his care.

“This event was yet another example of the values that school sports teach young people,” Owosso athletic director Dallas Lintner wrote on the school’s website. “And it stands as a testament of the integrity of the young adults that represent our schools and the (Capital Area Activities Conference.)."

A decade before the formation of the Michigan High School Athletic Association, Eastern Michigan University – then known as Michigan State Normal College – hosted what is believed to be the first organized high school basketball tournament in state history.

EMU will celebrate this anniversary Saturday in conjunction with the Eagles men’s basketball game against Toledo. Game time is noon at EMU’s Convocation Center, and during a break in play the athletic department will recognize the 12 schools that took part in that 1916 tournament – Marine City, Dundee, Milan, Mancelona, Farmington, Elkton, Royal Oak, Middleville, Lansing, Mount Clemens, Wayne and Saline.

The game of basketball was developed by James Naismith in 1891 at Springfield College in Massachusetts. As a means of promoting the game throughout the country, physical education professor and EMU's first athletic director Wilber Bowen asked his good friend Naismith to bring the game to the Michigan State Normal College (now known as Eastern Michigan University).

The first basketball game west of the Allegheny Mountains was played at Michigan Normal in 1894 to recognize the new physical education program and to dedicate the new gymnasium on campus.

Then in 1916, Bowen, along with instructors Elmer Mitchell and Lloyd Olds (who was also credited with the introduction of the striped referee jersey), organized the first high school basketball tournament in Michigan. A total of 300 invitations were sent out to all Class B schools in the state. Twelve schools responded, and the first high school boys tournament was held on the Ypsilanti-based campus on March 23-25, 1916.

Entrance to the tournament was free and (the event was) played at the Michigan State Normal School Gymnasium. However, expenses related to transportation, room, and board had to be provided by the participating schools. The MSNC's Physical Education Department made it easier for schools to participate by making arrangements with local residents to provide food at 20 to 25 cents a meal and lodging at 25 cents a night for each player.

The winning team was awarded a silver shield mounted on an oak base. Second prize was a silver cup, and the third place team received a banner. Individual participation awards to all players were also provided. The Ypsilanti Press at the time felt the Normal School "went first class with the awards."

For tickets to Saturday’s game and event, which will be followed by the EMU women’s team taking on Northern Illinois, call the EMU Ticket Office at (734) 487-2282 or visit EMUEagles.com/tickets. 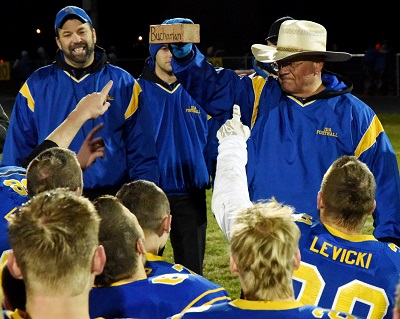 • Second Half’s Chip Mundy this fall wrote a story on the emergence of Ida’s football team on the way to making the Division 5 Semifinals and finishing its best season ever. A theme of that story was Ida’s philosophy of building “brick by brick,” coined by defensive line coach Gary Deland, who himself was building back after emergency triple-bypass heart surgery.

“From that very first practice in the summer to the last game as a senior, everything is built brick by brick,” Deland said for that story. “I can draw a correlation between that and my recovery, what I’ve gone through. It’s the same thing. It’s brick by brick.”

Kim Farver sent along this photo of Deland holding up a brick after the team’s 43-20 Regional Final win over Buchanan.

• We released the last batch of this year’s MHSAA-Farm Bureau Insurance Scholar-Athlete Award winners today, and one of the highlights during the 27 years of the contest came two years ago when we caught up with some of our winners from the first 25 years – including Bloomfield Hills Cranbrook-Kingswood’s Abby Cohen, who has gone on to co-found a company and help develop a smartphone application, Wing, to help asthma patients monitor their lung function.

Here’s a look at a video describing the technology she’s helped create: