Three weeks remain in the MHSAA’s 2014 fall season, and we’ve collected a few notes to pass along as we wind down the final three sports before moving inside (except for skiing) for the winter.

Below are an update on a fundraising game we previewed earlier, plus recognition for perfection at our Girls Golf Finals and another high honor for one of the top players in MHSAA volleyball history.

Score for a cure

We wrote in September about an upcoming soccer game between Lansing-area powers that would raise money for pediatric cancer research. The “Compete for a Cause” game between Okemos and Mason on Sept. 13 was the third of what has become an annual event started by Mason’s team and coaching staff.

Attendance for this season’s game was nearly double the year before, and funds raised increased more than 500 percent.

The final tally: Roughly 1,400 fans attended the game, which raised $11,000 that was split between the CureSearch for Children’s Cancer national foundation and the Michigan State University Pediatric Oncology Clinic.

The first “Compete” game in 2012 raised $1,000, and the 2013 game drew 800 fans and raised about $2,000. This fall, Okemos was ranked No. 1 in Division 1 and Mason No. 7 in Division 2 when the game was played; it ended in a 1-1 tie. Both went on to postseason success – Okemos advanced to a Regional Final, and Mason fell to eventual Division 2 champion East Lansing in overtime in their Semifinal.

Only one shot needed 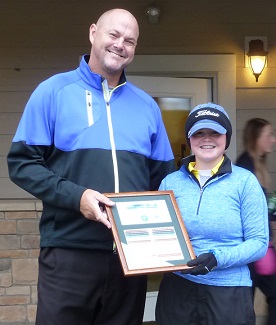 It’s a rarity – most of the time. But for the second straight season, a player at the MHSAA Lower Peninsula Girls Golf Finals sunk a hole-in-one.

Grosse Pointe South’s Lucy Buzolitz aced the par-3 No. 12 at Bedford Valley in Battle Creek, dropping the shot from 97 yards out during the first round of Division 1 play. Buzolitz was one of two individual qualifiers from her team and shot a 92-97-189 for the two-day tournament.

Sportswoman of the Year

Former Leland and Penn State University volleyball standout and current U.S. national team setter Alisha Glass was a finalist for 2014 Team Sportswoman of the Year at the 35th Salute to Women in Sports gala in October in New York City.

The event, put on by the Women’s Sports Foundation, annually recognizes a Sportswoman of the Year for both individual and team sports based on nominations by sport governing bodies and the public. Glass was one of 10 candidates this year for the team award after being named USA Volleyball Indoor Female Athlete of the Year in 2013. She also was named International Federation of Volleyball’s best setter at the 2014 World Championship in Italy after helping the United States to the title.