Rochester Adams and Bloomfield Hills Cranbrook-Kingswood baseball players and coaches both had loved ones on their minds when they took the field at Comerica Park earlier this month.

And they paid tribute to those loved ones over their hearts and across the backs of their jerseys.

Together, the teams raised more than $3,500 for the Coaches vs. Cancer research initiative.

Instead of its usual brown and yellow, Adams wore jerseys of light blue with a green ribbon as the middle “A” in its name across the front in honor of those suffering with lymphoma, including 2011 graduate and former standout Matt Williams. 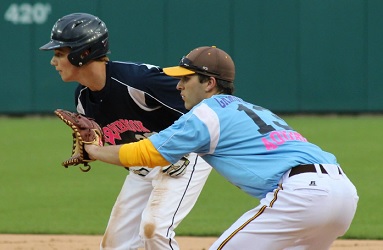 Cranbrook-Kingswood wore dark blue jerseys with a pink ribbon as the “A” in Cranbrook and with lime green writing on the back as the Cranes remembered longtime coach Jack Sanders, who died in 2012 after also battling lymphoma.

Sanders’ was among names adorning the backs of jerseys, along with other cancer victims the players and coaches knew.

Adams won the May 1 game, 18-3. Click to read more from the Oakland Press’ Keith Dunlap, who leading up to the game detailed both Williams’ fight and Sanders’ longtime contributions.

The Blue Devils’ senior forward broke the career record on April 28, scoring her 169th goal against Perry to pass the mark set by Newaygo’s Jaleen Dingledine from 2004-07. Newman also is a four-year varsity player.

Click to read more on her record run from the Flint Journal's Eric Woodyard.

The MHSAA doesn't keep a record for most strikeouts in an inning. But if it did, there’s a great chance Brighton’s Garrett Russell would top the list.

Against Ann Arbor Pioneer on April 5, Russell struck out five batters in an inning.

Russell struck out the first two batters of the inning swinging, leaving one out to get. He then struck out that third batter as well, but that batter reached first base because the third strike turned into a wild pitch.

That fifth batter then struck out swinging (which made it four strikeouts in the inning), but that third strike turned into a passed ball – and that batter ended up on first base, loading them for the sixth hitter of the inning.

But Russell found enough for one more K, striking out that sixth hitter swinging on a 2-2 pitch.

Basketball clearly runs in a pair of families who have come through Corunna High School.

This winter, brothers M.J. and Mikhail Myles both scored their 1,000th career points – M.J., a senior, on Jan. 3 and Mikhail, a junior, in the team’s District Semifinal on March 5.

On Feb. 18, senior Payton Birchmeier became the fifth player in girls program history to score her 1,000th point – despite scoring only four points as a freshman before suffering a season-ending knee injury in her first high school game. She became the first Corunna girl to score 1,000 since her sister Megan finished accomplishing the feat in 2010.

Payton Birchmeier went on to play her final three seasons also on varsity, and M.J. Myles also was a four-year varsity player. Mykhail Myles has played three on varsity with next season still to play. The Myles' stepsister Klarissa Bell this winter finished an outstanding career at Michigan State University and won the Miss Basketball Award as a senior at East Lansing High School in 2010, and stepbrother Devlin Bell also was a Trojans standout.

PHOTOS: (Top) Rochester Adams players congratulate each other during their May 1 game at Comerica Park. (Middle) The Adams' first baseman and a Cranbrook-Kingswood base runner await the next pitch. (Photos courtesy of Rochester Adams baseball.)