GRAND RAPIDS – At first glance, it might seem that the Grand Rapids Catholic Central boys basketball team had a relatively easy time in Thursday’s first Division 2 Semifinal against Ferndale.

It was anything but, and only came to fruition following a dominating fourth quarter that helped push the Cougars to an 81-55 victory over the Panthers at Van Andel Arena.

Catholic Central improved to a perfect 19-0 and will play either Pennfield or Bridgeport on Saturday at Breslin Center.

An up-tempo and competitive game turned into a lopsided ending as the Cougars scored an astounding 28 consecutive points in a span of seven minutes, six seconds from the end of the third quarter until late in the game.

“I thought our defense initiated a bunch of offense for us in that fourth quarter,” Catholic Central coach TJ Meerman said. “We rebounded a lot better, and coming out of half we knew they were going to make a push because that’s what they do. I’m proud of our guys, and our team defense and the way they shared the ball on offense tonight was a special thing.”

Catholic Central trailed 44-42 with 2:31 remaining in the third quarter, but scored the final six points of the quarter and opened the fourth with a 22-0 run.

Torrid outside shooting aided the spurt as the Cougars knocked down five consecutive 3-pointers at one point, including three from junior Jorden Brooks.

“We just came out and played hard in that fourth quarter on both ends,” said Brooks, who scored 14 of his 20 points in the second and was 6 of 11 from beyond the arc.

“I said to myself just keep shooting, and my teammates were setting me up for those 3-point shots.”

Brooks’ hot shooting helped Catholic Central on Monday in an upset of top-ranked Benton Harbor in the Quarterfinals. 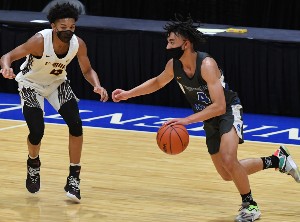 “His play speaks for itself, and he puts in a lot of time in the gym and it’s shown all season,” Meerman said. “He’s been doing this for us all season, and he had a fantastic run on the offensive end, but he made an impact on defense by keeping his guy in front of him.”

Catholic Central, which lost to Benton Harbor in the 2018 Class B Final, held a 35-25 advantage at halftime as sophomore Kaden Brown was the offensive catalyst by scoring 14 of his team-high 23 points.

Ferndale, however, scored the first eight points of the third quarter to cut into the deficit and eventually grabbed the lead.

“This team doesn’t get down on themselves,” said junior Jack Karasinski, who recorded 19 points and had five rebounds.

“We took a timeout, regrouped and we kept pushing forward. This is a dream because as a sophomore we got this opportunity taken away from us, and we’ve had the hardest route so far I believe with the teams we’ve gone through. I think it has built our confidence.”

“That’s what he does,” said Jorden Brooks, his older brother. “He’s a good defender, passer and finisher. He can do anything, and it’s crazy that he has three more years left. We just want to go out and hopefully give him his first state championship as a freshman.”

The fourth-ranked Eagles were making their first appearance in the Semifinals since 1985, and were hoping for a chance to win a championship for the first time since 1966.

Instead, they were unable to stop the offensive onslaught by the Cougars in the fourth quarter as they were outscored 33-11.

“I thought we did a poor job offensively, and we didn’t get back on defense,” Ferndale coach Juan Rickman said. “Brooks hit four or five threes, and I saw him do that against Benton Harbor. We didn’t execute in our transition defense and didn’t find him.

“The game just got away from us, and we gave up a lot of points to the three guys we wanted to keep from scoring. You never like to lose, so it’s just tough.”

Junior guard Jason Drake scored a game-high 27 points for the Panthers, but was held scoreless over the final eight minutes of the game.