JONESVILLE – Jeff Turner’s coaching career has come full circle – and it took only about 25 years. 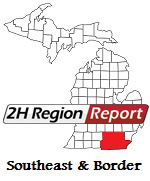 Turner graduated from Jonesville High School in 1986, after playing for longtime coach Bill Dunn as a senior. After coaching stops in Morenci and Dundee in southeast Michigan, Turner landed a job at Traverse City Central in 2007. Now, he’s back where it all started – at Jonesville.

“It’s been great,” Turner said on the eve of playing Reading tonight in a Big 8 Conference showdown. “The players and coaches have been working hard to implement the program philosophies.”

Turner’s Comets are 5-1 in the Big 8, tied atop the league with Reading. Tonight’s game will go a long way toward deciding this year’s champion.

Championships and successful seasons have long been a part of Turner’s history. He got the coaching bug while attending Hillsdale College. He credits Dunn and Greg Morrison, his football coach at Jonesville, with prepping him to coach one day.

“I coached the JV basketball team for Coach Dunn for four years while I attended college,” Turner said. “He was a huge influence on my coaching and a big reason why I coach today.”

After his student-teaching and a short time as an assistant at Morenci, Turner got the head coaching job at Dundee. He made the Vikings into a perennial Lenawee County Athletic Association contender. He took over a program that had gone through six straight losing seasons, and went 94-57 and won or shared four league titles over seven years. His 2002-03 team won 19 games, his best year to date.

He then left Dundee and headed north, landing at Traverse City Central.

“It was a dream job,” he said. “We had always wanted to live up north. It was a good move for us at the time. It was a big school, and I met a lot of challenges.”

After 10 seasons in Traverse City, Turner said he made the decision to move back downstate for his family. His wife, Amy, and daughter have been chronically ill with autoimmune diseases for years and had been making frequent trips to the University of Michigan hospital in Ann Arbor. 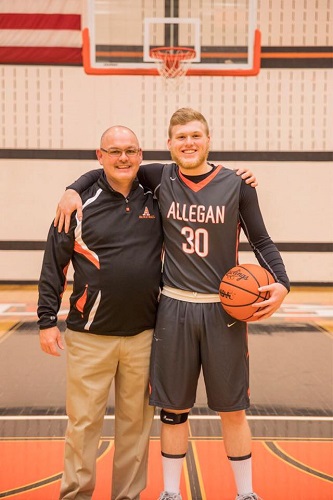 “They’ve been following me for 20 years,” Turner said. “I said it was time for me to follow them.”

He got a teaching and coaching job at Allegan High School, where he coached for three seasons. It was a good fit for him and his family.

“I didn’t really have any plans to leave Allegan, but the hometown team opened up,” Turner said. “It was hard to pass that up. It just makes sense to be closer to home.”

He was hired in mid-June and started holding basketball workouts when it was allowed. He coached JV football in the fall and feels right at home at Jonesville.

“I was super excited when the season started,” Turner said. “It was kind of like Christmas in a way. For our seniors it was a big thing that we were able to play. It was a big sigh of relief for them.

“There are people here that I went to school with,” Turner added. “It’s nice seeing some familiar faces. I have some good memories here. It’s been a great transition. Everybody has been very accepting of my coaching.”

His son, Zeke, is part of his coaching staff at Jonesville.

“It’s awesome,” he said about coaching with his son. “He grew up within my system and knows it very well. He played for me at Traverse City and his senior year at Allegan.”

Not everything is the same in his hometown. Jonesville opened a new gym in 2000 where Turner now directs practices and games.

“It’s a good change of pace here,” he said. “It’s been fun. I’m teaching kids where I knew their parents.”

There are other familiarities being back in southeast Michigan. One of his players is senior Connor Lauwers. Lauwers is the grandson of former Monroe St. Mary Catholic Central coach Ray Lauwers, who coached the Falcons for 42 years, winning more than 600 career games. Turner got to know him while coaching at nearby Dundee.

“Coach Lauwers has been a big influence on me as well,” Turner said. “He’s a really good person.”

On the court, Jonesville started the season with four straight wins, including a 48-35 victory over Reading. A loss to Homer is the only blemish on the schedule. Those three teams are tied atop the league at 4-1. Turner is one away from 200 varsity wins over his combined 21 seasons.

“It’s a pretty good league,” Turner said. “You have to come prepared every night. Every game is a challenge.”

PHOTOS: (Top) Jonesville's boys basketball team huddles around Jeff Turner during a game this season. (Middle) Turner, left, with his son Zeke during their time together at Allegan. (Top photo by Brian Playford, middle photo courtesy of Turner family).