Jermayne Golidy emerged as the “go-to” player on Saturday in Muskegon’s first real test of this young basketball season.

But the smooth, 6-foot-4 senior wasn’t even in the starting lineup on the previous night in a lopsided win at cross-town rival Muskegon Mona Shores.

“That’s the kind of team we are – you never know who will be the leading scorer,” said Golidy, who finished with 28 points, 12 rebounds and two blocked shots as Muskegon rallied from a halftime deficit to post an impressive 68-55 win over visiting powerhouse Chicago Whitney Young in the final game of the Muskegon Showcase tournament at Redmond-Potter Gymnasium. “I came out a little shaky and nervous, but I knew I had to start playing if we were going to win.”

Defense has always been paramount for Muskegon basketball, but fifth-year head coach Keith Guy knows that in order for the Big Reds to get back and compete for another Class A championship after winning it all in 2015, it will take three other Ds:

“We don’t have one guy on this team; we have 10 guys who can put it on the floor and score,” said Guy, whose team is off to a 6-0 start. “We have to use all of our weapons and we have to make good decisions with the ball. If we do that, we’ll be fine.”

This year’s team may not have any five-star college recruits, but the sum of its parts may be better than any other team in the state.

Golidy was one of those supporting cast members the past two seasons who is still trying to adjust his mindset in his senior year.

He started off the season with a game-high 20 points in a victory at Rockford, then was relatively quiet over the next three games, seemingly slipping back into his understudy role.

So his coach benched him.

“We thought we could get more out of him,” explained Guy, who has a 96-13 record at Muskegon, where he is assisted by Maurice Sain, Louis Murray and Josh Wall. “He had a rough week of practice, so he did not start against (Mona) Shores. We put him back out there, and he responded.”

After playing just 13 minutes and scoring eight points in the win over Shores, Golidy came out with renewed purpose against Chicago Whitney Young, an elite magnet public school which boasts such distinguished alumni as Michelle Obama and Jahlil Okafor of the Philadelphia 76ers. Golidy basically never left the floor, playing 30 of 32 minutes. 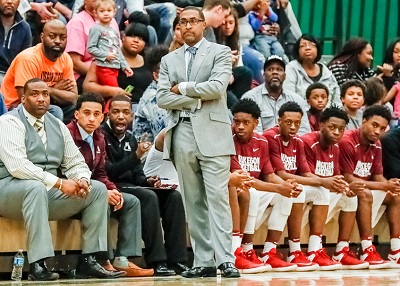 Muskegon trailed 23-21 at halftime, but it was a 3-pointer early in the third quarter which put the Big Reds ahead to stay. When defenders came out on him, Golidy drove his lean frame to the basket, while also scoring on offensive rebounds and putbacks. Golidy finished 10 of 15 from the floor (with two 3-pointers) and 6 of 8 from the free-throw line.

“I feel like I can play all-around,” said Golidy, who helped the Big Reds to the Class A Regional Finals last year, where they were upset by Hudsonville. “Each game might be different. If we are getting out-rebounded, I’ll go down in the paint. If we need a 3, I’ll take that.”

The problem for Muskegon opponents is that Golidy is just one of four extremely versatile seniors in the Big Reds’ starting lineup who all measure between 6-4 and 6-6 and can play both inside and outside, thereby creating a matchup nightmare.

Markell Jackson (6-6) is the tallest and thinnest of the four, with a massive wingspan that has allowed him to grab a team-high 9.4 rebounds per game. Anthony Bethea III (6-5) is the strongest and most natural post player, and has a nice left-handed shooting stroke. Sam Cornett Jr. (6-5), who joined the Big Reds after formerly playing for his dad Sam at Grandville, supplies speed and ball-handling skills of a guard.

One of the biggest challenges for Guy is keeping those seniors engaged and challenged throughout the long season.

Muskegon, frankly, has not been tested much in the Ottawa-Kent Conference Black since Guy came over from Muskegon Heights in 2012. Therefore, he has made it a point to seek out the best nonconference opponents he can find, often in early-season tournaments.

Already this winter, Muskegon has knocked off East Kentwood in the Muskegon Area Sports Hall of Fame Classic over Christmas break and Chicago Whitney Young at the Muskegon Showcase last weekend. Next up is a tussle with host school Grand Rapids Ottawa Hills in Saturday’s fourth and final game at the annual Floyd Mayweather Basketball Classic.

“We love these big games; that’s where we play our best,” said Golidy. “We’re trying to go 28-0, get a ring and get a state championship. Those are our goals.”