Riddle 1: How can a ball get passed from another to another and go through the bottom of the net resulting in three points and three of them appearing on a list on a school banner?

Riddle 2: How can three Balls from Riddle 1 represent one-third of the list?

Answer: Only one ball is a basketball. The other four Balls are all related to each other. They are Kevin Ball, Jeremy Ball, Preston Ball and Spencer Ball.

As a result of the basketball being passed by Spencer to Preston in a win over Boyne City last week and Preston subsequently burying a 3-pointer, Preston became the Elks’ ninth member of the 1,000 point club joining his father and uncle.

“It is really cool,” the four-year Elk Rapids starter said of joining his father and uncle. “Three Balls on the list ... I really can’t put it into words ... it’s incredible.” 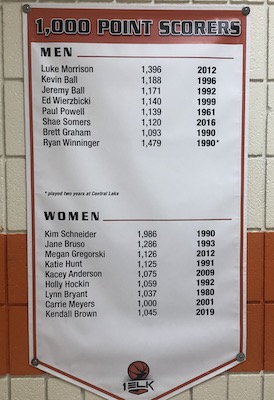 “As a family we’re very blessed and been very fortunate to have all of our kids have success in athletics,” said the proud father of three children raised with his wife Charlotte. “So to have Preston join us is awesome.

“We’re excited that Spencer has been a part of it as well,” he conditioned. “To be able to play with his brother is pretty special. With my brother being four years apart, we didn’t have that opportunity until after we graduated.”

Spencer and Preston have also teamed up on the soccer pitch for the Elks, who reached the Division 3 Semifinals this fall. Preston led the Elks in scoring all four years amassing 86 goals and 41 assists. Spencer assisted Preston’s final career goal and the Elks’ only goal in the Semifinal shootout loss to Grand Rapids South Christian.

And Spencer’s very first goal for the Elks was assisted by Preston.

Spencer had hopes all along he’d be the one getting the assist on the 1,000th point. It was on the sophomore’s mind as Preston neared the mark entering the game with the Ramblers. But it didn’t cross his mind in the game until play was stopped to recognize the accomplishment.

“I wanted to, but our whole team wanted to do the same thing,” Spencer noted. “They all wanted the assist on it.

“I guess it just fell in place.”

And Preston is thrilled it did come from his brother.

“It was pretty cool the way it all turned out,” he said.

Preston currently ranks ninth among the school’s all-time career scorers. Kevin’s 1,188 points are second, and Jeremy is third on the list with 1,171. The senior is not likely to pass top scorer Luke Morrison, but topping his father and uncle may be in reach. 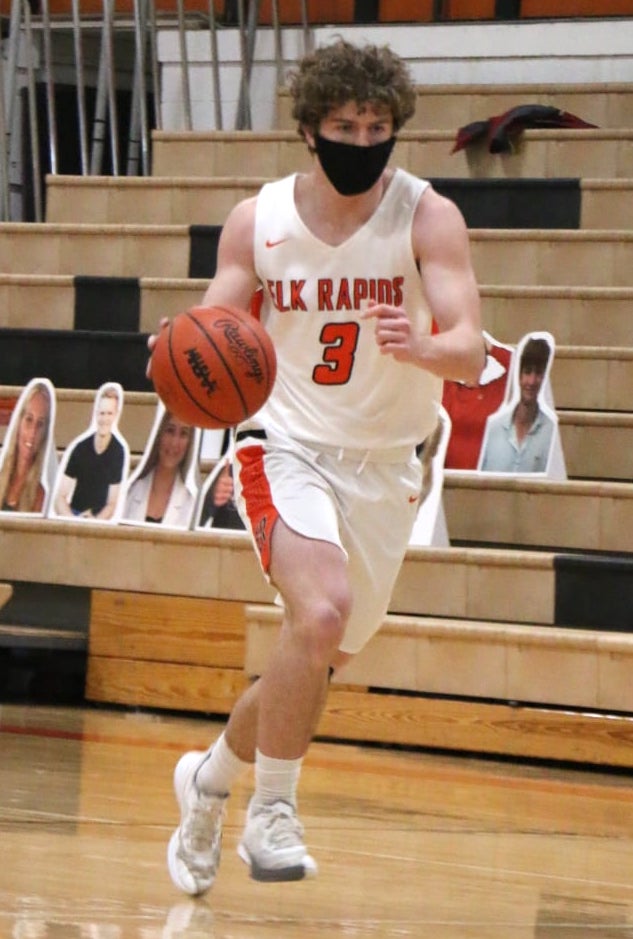 “Luke Morrison was kind of the guy I looked up to a lot,” Preston said. “Watching him throughout his career kind of inspired me.

Graham coached the Elks when Preston began his varsity career. Kevin was the JV coach and was happy to see his son move up to the varsity right away. Kevin took over the boys varsity last year when Graham stepped down.

Kevin wasn’t and still isn’t sure how far Preston would go, but he knew there was a good chance Preston would join him in the 1,000 point club the day he started on the varsity. Preston’s summer camp display proved to coach Graham that he could play varsity, his father said. The rest, as the saying goes, is history.

“Once he made (varsity) and once he was in that position to be a starter as a freshman, I knew he had a shot (at the 1,000 point club),” the coach said.

Both coach and son are glad to put the accomplishment behind them and move on. The Elks are 8-1 after Friday’s win over East Jordan.

“I tried to think about it as little as possible,” said the senior who is averaging nearly 20 points, five assists and five rebounds per game. “It felt really good to get past that benchmark.

“Hopefully people kind of stop talking about it for a little bit and I can just focus on the rest of season, play my game and just enjoy it.”

The Balls’ younger sister, Mattea, is an eighth grader. She is expected to carry on the Ball family tradition next year playing basketball for Elk Rapids.