EAST LANSING – Emoni Bates was here to help, he told his teammates before beginning his freshman year at Ypsilanti Lincoln in the fall.

That’s one very understated way to put what the nationally-renowned freshman has meant to the Railsplitters during their most successful season.

Bates, and Lincoln, played in their first MHSAA Semifinal on Friday, and the 6-foot-10 phenom showed as expected – he flashed skill and poise and brought roars with a pair of dunks, including one from a pass off the backboard.

And Lincoln continued to perform as he expected when he joined an otherwise veteran lineup, making an incredible 57 percent of its shots from the floor in a 72-56 win over Howell to earn a berth in Saturday’s Division 1 championship game.

Lincoln (22-4) will play for its first championship against Detroit U-D Jesuit at 12:15 p.m. Saturday.

Playing on the Breslin Center floor for the first time, in front of a mostly full lower bowl, has derailed many an MHSAA championship hopeful.

But there might not be a player, and team, in recent memory that has been more prepared for a trip to East Lansing than Bates and Lincoln.

Buzz around the nationally-renowned freshman started high this winter and has only continued to grow as he’s keyed the Railsplitters’ run to its first Regional title, then Semifinals and now championship game.

He had 31 points – on 55 percent shooting – and 14 rebounds against Howell, and his teammates followed suit showing no effects from the big-arena atmosphere by sinking 59 percent of their shots.

“It was just fun. We battled all game, he’s taller than me and was shooting over my head, and I couldn’t really do anything about it,” said Howell senior Josh Palo, an all-state honorable mention last season and one of those charged with defending Bates on Friday. “I was definitely looking forward to guarding him. Our game plan was making him take tough shots. He was knocking them down. We couldn’t do anything about it.” 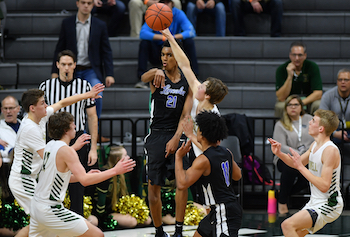 Bates’ first basket was a 3-pointer with 3:52 left in the first quarter that made the score 10-4. The Railsplitters never led by fewer than six points the rest of the way.

“I’ve been on varsity four years, and the added pressure, I tell him all the time to put the pressure he gets and put it on me,” Chatman said. “I feel we’re here for him. We all embrace him. There’s no jealousy or none of that. We embrace him all the way.”

Howell (20-7) took a similar step with its program this winter, with Friday’s Semifinal the team’s first since 1927. The Highlanders first won their third straight District title and finished with their highest win total of Howell coach Nick Simon’s seven seasons leading the program.

Palo, one of four seniors in the starting lineup, had 16 points in his final high school game. Junior guard Tony Honkala had 12 points off the bench, and senior forward Jake Sargeant had 11 points and six rebounds for the Highlanders.

“Our guys believed in this for a long time,” Simon said. “It’s not just something that’s happened at the end of the year.

“I knew we could do it, and they knew we could do it all year. We went through tough battles, went against tough opponents in the playoffs, and we were used to that tough competition. We respected them, but we were not fearful at all.”

PHOTOS: (Top) Ypsilanti Lincoln’s Emoni Bates throws down one of his two dunks during Friday’s Division 1 Semifinal. (Middle) Howell players work to break up a pass.