EAST LANSING – Monte Morris returned to the Breslin Center on Thursday for the start of his fourth and final trip as a member of the Flint Beecher basketball program.

The group on the court with him was, for the most part, different than the one that last season won the MHSAA Class C championship. But the Buccaneers’ level of motivation hasn't changed a bit.

Beecher may not be seeking to end a title drought this time after last season's was its first since 1987. But Morris and another group hungry to make history pulled one more win closer to doing so with a 73-55 win over Monroe St. Mary Catholic Central.

Beecher will finish this season against Laingsburg in Saturday’s 4:30 p.m. championship game.

“Last year, any one of these guys could’ve stepped in and started like they do now. They were just getting ready,” Morris said. “They put the work in during the offseason. They just waited their turn. Now it’s their year, and they’re cherishing the moment.”

And it’s been another memorable week for the Bucs (26-1). 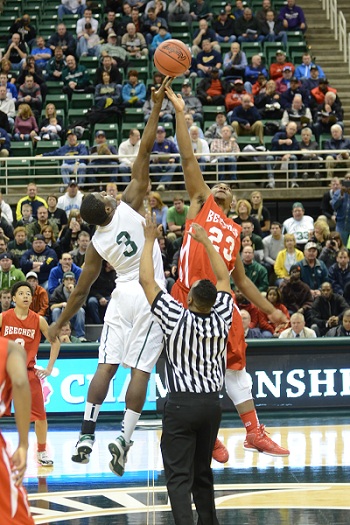 On Monday, the Iowa State-bound Morris was named Mr. Basketball by the Basketball Coaches Association of Michigan. On Tuesday, Beecher edged Detroit Consortium 46-44 to earn its return trip to East Lansing.

Morris and his teammates were aware that his award would serve as additional motivation for the teams it would see this week. The Bucs used that as an opportunity to focus their collective mindset even more.

“We’re still hungry,” Beecher coach Mike Williams said. “We’ve got 32 minutes left, and we’re going to learn from history. We know what happened the last time Beecher was here trying to repeat. We’ve got to put in 32 minutes Saturday to bring it home.”

That season, 1988, Beecher returned to the Semifinals but lost in overtime 68-64 to eventual champion Grand Rapids South Christian.

The potential for that kind of situation faded quickly Thursday.

“It was just a great opportunity for our kids,” St. Mary coach Randy Windham said. “We’ve been knocking at the door. Two years ago we lost to Schoolcraft (in the Quarterfinal), and last year we went to the Regional and lost to River Rouge. This year, their will and character just showed. They refused to lose to Schoolcraft this time (again in a Quarterfinal).

“This is something these young men will remember the rest of their lives.”