He saw Levane Blake get a steal and a dunk, Malik Ellison pull up for a 3-pointer. “I just remember seeing the chemistry between them,” Williams said. “And I thought to myself, I think we’ll be going back down to Lansing a few more times.”

Now seniors, Blake, Ellison and Jordan Roland have a chance to finish their Beecher careers among the most successful players in the program’s storied history.

The Bucs have won seven MHSAA titles, and those three captains have been part of two straight – and earned an opportunity to three-peat with a 76-68 victory over Detroit Edison Public School Academy in Thursday’s first Semifinal at the Breslin Center.

“We feel more poised this year. It’s our senior year, and we want to go out with a bang,” Roland said.

“It’s our senior year, and I won’t be able to wear this jersey anymore,” Blake added, “or play on the court with my team, or lead the young guys. So we work every day in practice, go hard, hard, hard, and Coach Mike pushes us.”

Beecher (22-5) will play Grand Rapids Covenant Christian in Saturday’s 4:30 p.m. Final. The Bucs not only have won the last two Class C titles, but four of the last five.

After watching these seniors star as eighth graders that day in 2013, Williams knew they’d be on varsity as freshmen. Ellison, Roland and Blake all joined the varsity that next winter; Ellison and Blake started as sophomores in the 2015 championship win, and all three started in last year’s title game. 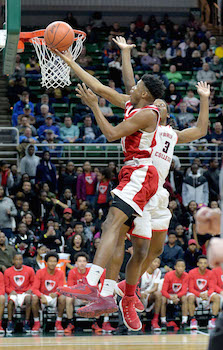 Edison (14-12), in its first Semifinal after winning its first Regional title last week, fought back-and-forth for the lead through the first five minutes of the second quarter until Beecher took a one-point lead on a Roland bucket with 3:17 to go in the first half, and never gave up the advantage again.

“We know Malik is a tough little guard, and I think the thing you never can put a hand on is a guy coming up here playing in three state championships games,” DEPSA coach Brandon Neely said. “I think the advantage he had is he just understood how the game would go. … You know that those guys are never going to get rattled. They’ve been in so many wars that when they come to battle, they’re just loose; it’s just another game for them."

Beecher freshman guard Jalen Terry had 15 points as his team’s second-leading scorer, something that spoke to what Williams has emphasized to his successful seniors this winter. He put it on them to play major roles in bringing along the next generation, to work at both continuing the Bucs’ legacy and setting it up for the future as well, just as others did to assist them at the start of their careers.

“I’m just going to go out there and play hard for them,” Terry said. “They gave me everything they’ve got. I’m going to give them everything I’ve got.”