EAST LANSING – There wasn’t much for Flint Beecher coach Mike Williams to enjoy as he watched Detroit Loyola shred his team’s 15-point lead over the final 14 minutes of Thursday's Class C Semifinal.

But there was one thing he could applaud; his players stayed up when another team, a much less accomplished or experienced team, might have lost its edge.

Junior Malik Ellison believed the reigning MHSAA champ would still end up advancing to Saturday. And he backed it up with the season on the line.

With the Bucs trailing by two points and five seconds to play, Ellison took a handoff from a teammate of an inbounds pass, and with no way to get to the basket, drilled a 3-pointer from five feet behind the arc to give Beecher a 60-59 win as the final second ticked off the clock.

“In practice we run that play all the time,” said Ellison, who also started on last season’s championship team. “(Coach) gives us a situation, like we’re down two and we’ve got to get a bucket. At first on my pump fake, I was like, should I pass? Then I saw (the defender) jump, got a little angle with my arm, and knew it was going in. I felt it.

“Every day I go in the gym, either the Y or I stay after practice, and it’s shots like that just for times like this. I just pulled it through today.”

Beecher (24-2), ranked No. 2 heading into the postseason, will take on Grandville Calvin Christian in Saturday’s Final at 4:30 p.m.

But the Bucs’ attempt to win a fourth Class C title in five seasons looked to be done when Loyola added the final two points of a 24-8 run on sophomore Pierre Mitchell’s two free throws with 47 seconds remaining.

They made the score 59-55 in the Bulldogs’ favor, and junior Jordan Roland’s bucket with 26 seconds left drew Beecher to only within two. Loyola then missed a pair of free throws with 12 seconds to play, but on the ensuing possession managed to deflect Beecher’s first pass after reaching midcourt out of bounds – setting up the dramatic final five seconds.

After receiving the handoff from senior Aquavius Burks on the wing to the left of the basket, Ellison took one dribble left before jutting back right – he had to a shoot a 3-pointer, as Mitchell gave him no opening to the basket and time was nearly gone. Tilted a bit to the right, Ellison floated a shot that dropped as the clock expired. 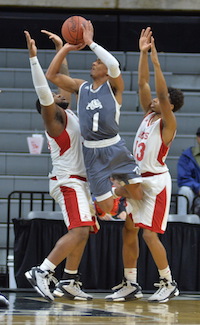 “What can I say? Wow. What an incredible ending,” Williams said. “I thought we got a little complacent once we got the lead, and that’s the first time we’ve turned the ball over as many times (18) as we did all year.

“But one thing about this team and what it’s shown all season, is resiliency, poise and composure in the face of elimination. … I wasn’t proud that we gave up the lead, but after we gave up the lead it was all positive in the huddle. (And) Malik said, ‘We’ve got this.’”

Beecher had trailed Flint Hamady by five points with 40 seconds to play in the District opener before winning 68-62. The Bucs then trailed Southfield Christian by 13 points with nine minutes to play in the Regional Final before coming back for a 78-65 victory.

So trailing late wasn’t new, and neither was the atmosphere at Breslin Center, Beecher’s late-season home most of this decade.

“It helps with the coaching staff, and it helps with the players,” Williams said. “I remember coming here back in 2003, and one of the first things I noticed is the ball bounced a little different on this floor. The atmosphere is a little different than playing in a gym. When you come down here for the first time … you noticed in the first half that Loyola had a hard time adjusting to shooting the basketball. They were shooting the basketball a whole lot better once they got adjusted to the depth perception.”

In fact, Loyola did shoot 29 percent from the floor during the first half and 42 percent during the second, while Beecher was more consistent and finished at 48 percent for the game.

Bulldogs senior Ernest Adams and sophomore Keith Johnson especially found their shots over the comeback run, Adams making all three of his 3-pointers and scoring 11 of his team-high 15 points during the stretch and Johnson making both of his 3-pointers over the final 4:10.

“The bigger thing is what has happened all year for us; these guys played for each other,” Loyola coach John Buscemi said. “Once a few (shots) went, everyone got energized – the guys in the game, the guys on the bench. We love each other, we’re a family, and we just feed off of that. And I think we did tonight."

Adams also had 10 rebounds for Loyola (21-6) and Johnson finished with 10 points. Senior Romari Ennis had 12 points.

Burks had a game-high 22 points for Beecher making 6 of 7 shots from the floor and all seven of his free throws. Ellison had 11 points and senior Jamari Thomas-Newell had 12 points.

PHOTO: Beecher players embrace Malik Ellison after his game-winning shot Thursday. (Middle) Loyola’s Pierre Mitchell works to get a shot up while surrounded by Beecher defenders.