EAST LANSING – Benton Harbor’s players came off the court Friday night to their band playing and fans who had filled most of the horseshoe at the north end of the Breslin Center.

It’s hard to believe the Tigers hadn’t played in an MHSAA Semifinal since 1993. But Benton Harbor basketball is back in a big way – and one win from the school’s first title since 1965.

Led by coach Corey Sterling – who played on that 1993 team – the Tigers continued their longest run in more than a decade with a 69-52 win over Cadillac to earn a spot in Saturday night’s Class B Final.

“What Benton Harbor is known for is basketball,” Tigers senior guard John Robinson, Jr., said. “For us to come back in 2014 and make a run is really big for the community and for the Benton Harbor program.”

Benton Harbor will face either Milan for Detroit Douglass at 6:30 Saturday night.

Sterling is in his second season leading his alma mater, guiding it to a 17-9 record this winter after the Tigers went 17-7 a year ago. That 1993 team was the last to make a championship game as well, where it fell in a heartbreaker 67-64 to Detroit Pershing.

Benton Harbor had won two Regional titles since, the last in 2001. But the Tigers’ reputation as a basketball power has faded only a bit, getting a boost in part during the middle of last decade when Wilson Chandler starred before moving on to DePaul and now the NBA’s Denver Nuggets.

“One thing we try to do is have the guys come in who played back in the day,” Sterling said. “(These players) are aware that the last champion was in 1965. They’re aware that I played here at Breslin in ’93 and lost by three. We remind them that Benton Harbor is a basketball school with a rich tradition. And they’re just really hungry. They don’t want their season to end.”

It took only about a quarter Friday to realize it wouldn’t end until the final day. 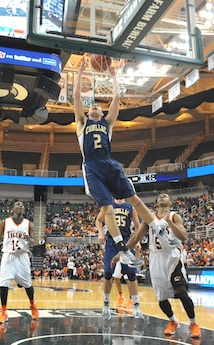 Benton Harbor took its first double-digit lead 1:09 into the second quarter and kept it for good over the final 18 minutes. Four players scored in double figures, led by senior forward Cortez Moore with 18 points plus 11 rebounds.

Senior forward Jalen Brooks led Cadillac with 30 points despite constant attention from one or multiple defenders. But the next highest Vikings scorer totaled only five points.

Brooks was the team’s second-leading scorer last season when it fell to Detroit Country Day also in a Semifinal.

“It’s really exciting, especially for our juniors and after what we came off of from football (Cadillac finished 11-1 and won its District),” Brooks said. “That translated to the basketball court. People look at our team, and we’re not the biggest. Most people wouldn’t think we’d get where we’ve gotten. But we have a lot of heart, and I think that has a lot to do with it.”

Both teams entered the postseason unranked. Cadillac finished 19-7, with two losses by two points or fewer.

Five of Benton Harbor’s losses were by three or fewer points, which no doubt has helped as the Tigers have taken down two top-five teams over the last two weeks.

“We might’ve lost nine games this year, but we play in one of the toughest conferences in the state,” Sterling said, referring to the Southwestern Michigan Athletic Conference West. “All our losses built character. So when teams make a run on us, we overcome it. We know how to finish games.”

HIGHLIGHTS: (1) Cadillac's Jalen Brooks led all scorers in the Class B Semifinal against Benton Harbor with 30 points. Here he drives the lane for a basket and the foul - a 3-point play! (2) Cortez Moore led Benton Harbor with 18 points and 11 rebounds. Here he scores on a putback.