EAST LANSING – One quarter – 8 minutes – remained in Friday’s last Class B Semifinal at the Breslin Center. Time appeared to be running out for Milan as it trailed Detroit Douglass by eight points.

And this was the scenario – almost – that the Big Reds wanted.

Sure, they would’ve liked to be trailing by less. And they probably didn’t want the ball in a freshman’s hands for the program’s most pressure-packed free throw of the last half century.

But aside from that …

“We were down eight and we had eight minutes to win this game,” senior guard Donovan Verges said. “We’re yelling at each other, ‘We’ve gotta come back,’ that we’re not losing today. We want to play in that championship game. So we went out there and fought as hard as we could.”

And they eventually edged Douglass, 51-50, in the most exciting Semifinal of this weekend.

Verges nailed a 3-pointer with 3:38 to play to tie the score for the first time since the start of the third quarter. It remained tied 50-50 with 22 seconds to play as the ball passed through four sets of hands near midcourt before falling into those of Milan freshman Garrett Gardette – who was fouled and made the go-ahead free throw with five seconds to play.

He missed the second free-throw attempt. But Douglass’ outlet pass off the rebound landed comfortably back in Verges’ hands with everyone else on the court then too stunned to do anything more before time expired.

Just like that, Milan (24-3) will be facing Benton Harbor on Saturday with a chance to win its first MHSAA title since claiming Class C in 1948.

“All year we said we wanted to make history here at Milan,” Big Reds senior Latin Davis said. “We wanted to leave a legacy. So that’s what we’re trying to do.”

The 5-foot-9 guard scored 17 points (on 6 of 10 shooting from the floor) with six assists, and 6-7 junior Nick Perkins added 16 points and nine rebounds.

Davis had only three points during the fourth-quarter comeback, but also had two assists. And he played the starring role as Milan’s defense allowed only 12 points in the third quarter and eight during the final period.

“Latin Davis has been underrated for three years. He’s a winner,” Milan coach Josh Tropea said “He’s 64-8 in the last three years, and he’s won more trophies than I care to count. And there’s no question we’re playing (Saturday) because of his leadership and his ability at point guard.” 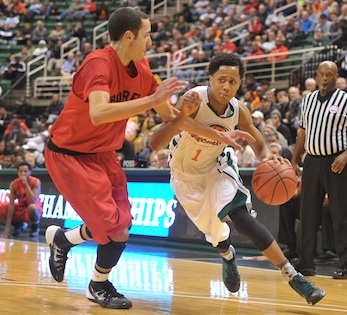 Douglass coach Nkwane Young said after that his team had had difficulties all season against zone defenses. Milan switched to a stifling 1-2-2 zone for the fourth quarter after using a 2-3 earlier and watching as the Hurricanes found openings when the Big Reds tried switching to man-to-man.

Douglass senior guard Darrell Davis, a Mr. Basketball candidate, ended up spending most of the game stuck on the perimeter and got off only 11 shots in scoring just nine points, 16 below his average.

Even then, Douglass’ final undoing fell partially on missing 5 of 9 free-throw attempts during the fourth quarter and making only 10 of 21 for the game.

“I thought the third quarter, we had control of it. And in the fourth quarter, I thought we were still in control,” Young said. “Like I told my team, one play doesn’t (lose) the game. There are some things we could’ve done differently, made some free throws. But otherwise, I’m proud of my team.”

The Semifinal run was the first for Douglass, which previously had reached a Quarterfinal in 2010. Davis was part of teams that finished 68-31 and won four District titles over his four seasons despite playing as a Class B in the Class A-heavy Detroit Public School League. Young called his standout the face of his program, and Davis will go on to play next season at the University of Dayton.

“The first year we took it to the Regional (Semifinal), and I wanted to take it farther than that, to the state championship,” Davis said. “My legacy is a good legacy at Fred D. I hope somebody comes in to replace it. I’ve just got to work harder in college, a stepping stone toward life.

“A lot of people doubted us, didn’t think we’d be making it this far. We came up a little short, but it’s OK. We just wanted to win, that’s all.”

PHOTOS: Milan freshman Garrett Gardette tries to get past Douglass’ Daavi Bradley during Friday’s Class B Semifinal. (Middle) The Hurricanes’ Darrell Davis works to get to the basket.

HIGHLIGHTS: (1) Detroit Douglass ended the first half on an 11-4 run, including this bucket by Darrell Davis on a break with 3 seconds to go. (2) Nick Perkins had a pair of baskets for Milan in the closing moments of its 51-50 Class B Semifinal win. This putback gave the Big Reds the 50-49 lead at the time.