This is the final part in a series on MHSAA tournament classification, past and present, that has been published over the last two weeks and originally ran in this spring's edition of MHSAA benchmarks.

The stories are worthy of the silver screen.

Long lost legends of lore, forgotten by most in the Lower Peninsula of the state of Michigan.

Absurd anecdotes of basketball played behind glass, and out-of-bounds lines painted on walls.

Tales of overlooked places like Trenary and Champion and Doelle and Watersmeet.

This is the story of MHSAA Class E basketball.

From 1932 to 1947, Michigan's Upper Peninsula did not compete in the state-sponsored basketball tournament. Instead, the U.P. held a separate basketball tournament, crowning champions in Classes B, C and D. In 1941, the state added a fifth classification – Class E, comprised of schools with a student body numbering 75 or fewer. A fourth bracket was added to the U.P. tourney.

Following the 1948 season, the Upper Peninsula returned to the state tournament. Winners of the traditional U.P. tourney were pronounced regional champions, and advanced to the state quarterfinals in Classes B, C and D. However, since there were no Class E schools with basketball teams in the Lower Peninsula, the winner of the U.P. tournament crown was proclaimed Class E state champion. This arrangement continued through the spring of the 1960 season.

Since they were the state's smallest high schools, the gymnasiums came in all shapes and sizes. Some sported a center circle that intersected with the top of the key. Basketball courts that doubled as a stage required netting to keep the kids and the ball on the court and away from the audience seated below.

Fred Boddy, a former coach at Champion, recalled his first visit to Doelle. Located in copper country near Houghton, the hosts were the proud owners of “the smallest” gym in U.P.

“I couldn't believe my eyes. ... Here on the second floor were windows and bleachers all around filled with fans. The gym, of course, was located on the first floor, but to get into the gym one had to go around to the back of the school to enter through the boiler room to the locker rooms, which opened onto the gym floor much like a dugout on a baseball field. The players sat on a bench under the wall and could look out and see the game in this manner. The free throw lines intersected and there were no out of bounds lines... the wall itself was ‘out of bounds.’ On the floor during the game were 10 players and two referees. There were no sounds as all the fans were up on the second floor, glassed in.

The cheerleaders tried valiantly to fire up the fans up on the second floor, but the teams couldn't hear in the quiet below. The score clock and statistician personnel were placed in a corner box high over the floor in one corner of the gym. They attained this lofty perch by a ladder that was removed from the trap door after all three were in position and the game could thus commence. The timer then tied a rope around his ankle. To send a sub into the game the coach would send the player along the wall heading for this rope. He would pull the rope causing the timer to look down through the trap door and at next opportunity would ring the buzzer and admit this substitute”

Regardless of the challenges presented by these cracker-box gyms, the fans loved their basketball. “The enthusiasm was just the same, if not bigger, than schools twice and 10 times their size,” noted longtime U.P. historian, Jay Soderberg.

The 1942 tournament, scheduled for March 19-21, was postponed one week because the city of Marquette was more or less taken over “by nearly 1,000 selective service registrants from every county in the Upper Peninsula” who had another and more serious battle in mind – World War II.

Palmer, this time coached by Elvin Niemi, repeated in Class E with a 37-31 victory over Bergland. It was Palmer's 32nd consecutive victory.

No tournament was held in 1943 due to the involvement of the United States in the war. In the 1944 championship game, Cedarville jumped out to a 19-14 first quarter lead but was held to 24 points in the remaining periods and fell to Amasa, 51-43 at Ishpeming.

Trenary made its lone Class E finals appearance in 1945, losing to Bergland 49-39 at Ishpeming, while the Alpha Mastodons won their first U.P. title since 1934 with a 48-28 win over Champion in 1946. It was the second of five Class E titles for Alpha coach Gerhardt “Gary” Gollakner, one of the finest coaches to come out of the U.P. Gollakner had coached at Amasa two years earlier, and his Mastodons would earn three additional titles during the 19-year run of the Class E championships.

Bergland became the tourney's second two-time winner in 1947, with a 40-37 win over the Perkins Yellowjackets. Perkins made four trips to the Class E finals over the years, including an appearance in the final year of the tournament, but came away empty-handed each time.

The Nahma Arrows made their first appearance in the championship in 1951, losing to Michigamme. Led by coach Harold “Babe” Anderson, a cage star at Northern Michigan College during the early 1940s, the Arrows returned to the finals in 1952. Nahma finished the year with a 21-0 mark and a 64-44 win over Marenisco for the crown. 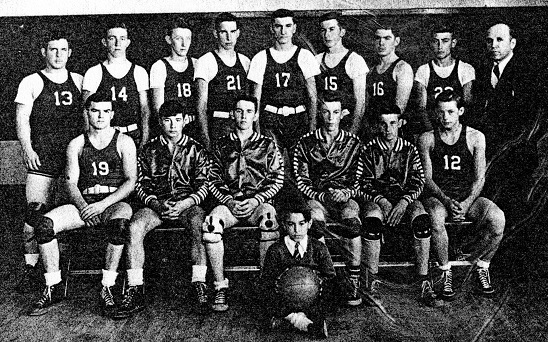 The two teams met again in a finals rematch the following year. The scored was tied six times, while the lead changed hands seven times in this barnburner. With 15 seconds to play, Nahma led 64-60. Marenisco's Robert Prosser hit a jump shot, then teammate Bill Blodgett stole a pass and scored to knot the game at 64. With two seconds remaining, Nahma's Bernard Newhouse was fouled. Newhouse hit the first free throw, but missed on the second. Teammate Wendell Roddy tipped in the rebound, and the Arrows had their second title.

Alpha returned to the championship circle in 1954 with a 52-48 win over Perkins.

Kocinski, a four-year starter at Alpha, scored 1,782 points during his career, then an all-time U.P. record. He once scored 51 points against Amasa, and could have scored more according to teammate Walter “Slip” Ball. “He refused to shoot in the fourth quarter, and passed up one shot after another,” Ball said.

Without question, Trout Creek was one of the powerhouse squads during the final years of the tourney. The Anglers, coached by Bruce “Pinky” Warren, a former captain of Purdue's football team, made four trips to the finals during the last six years of the Class E tourney. The defending champions downed Alpha in the semifinals of the 1956 tournament, then knocked off Hermansville 86-68 in the finals to repeat. It was a year of celebration for fans of U.P. basketball, as four of the state's five champions – Stephenson (B), Crystal Falls (C), Chassell (D) and Trout Creek (E) – came from Michigan's northern peninsula.

Hermansville returned to the finals in the spring of 1957 and earned its second Class E title with a 77-51 win over Michigamme at Escanaba. Trout Creek downed Perkins 61-41 for their third crown in 1958.

The 1959 championship, hosted at Northern Michigan College's fieldhouse, was a showdown of the U.P.’s only undefeated squads, Trout Creek and Nahma. Trout Creek was riding a 24-game winning streak that dated back to the 1958 season. A scoring machine, Warren's Anglers averaged 81.7 points per contest. Nahma, 19-0 on the season, boasted the U.P.'s strongest defense. Still coached by “Babe” Anderson, the Arrows had allowed an average of 38.2 points per game. Led by senior Warren Groleau, Nahma had been last defeated by Trout Creek in the semifinals of the 1958 tourney.

Leading 25-15 at the intermission, Nahma matched Trout Creek point for point in the second half for a 55-45 victory.

Hermansville, behind Richard Polazzo's 29 points and Irwin Scholtz's 27, downed surprise finalist Perkins 72-50 in the 1960 finale, to end this chapter in MHSAA history.

Today, most of the former Class E high schools are long gone. Many have closed their doors and consolidated with other area schools. Amasa and Alpha merged with Crystal Falls to form Forest Park. Palmer is now part of the Negaunee school system. Bergland and Trout Creek joined forces with Class D Ewen to form Ewen-Trout Creek. Hermansville combined with Powers to form North Central, to name but a few. A few remain: Dollar Bay, Marenisco (now Wakefield-Marenisco) and Watersmeet, and their enrollments are much the same as in the glory days of the state's fifth classification.

Author’s note: Special thanks to Jay Soderberg and Roger Finlan, who assisted in gathering statistics and quotes used in this article. Thanks also to Dick Kishpaugh, Bob Whitens, Walter “Slip” Ball, Dennis Grall, Fred Boddy, Bruce Warren, Gene Maki, Harold “Babe” Anderson and the various personnel at U.P. high schools for their contributions to this story.