Never has a basketball player looked forward this much to shooting an airball.

That’s what Carson Vincent is expecting two months from now, when he gets to fire with his right hand again, just like he has most of his life – until breaking a bone in his right wrist during a 7 on 7 football drill at the end of last summer.

It’s incredible how much would’ve been lost if the Ovid-Elsie senior hadn’t been unknowingly tough and uncommonly flexible.

Vincent played a full season of football not knowing how badly he’d injured his wrist. Once he learned of the break in late November, he decided to play on – learning to shoot with his left hand and finishing his career as the Marauders’ second-leading score all-time while leading them to their best season in 25 years.

And the 6-foot-5 forward saw a clear parallel in the shared team and individual successes.

“The reason the team did well is we all wanted each other to be successful, to win a championship, to see each other happy.”

Ovid-Elsie finished 18-5 this winter, first in the Tri-Valley Conference West and as a Class B District champion. The league title was the program’s first since 1984, and the District its first since 1994.

Individually, Vincent began the winter coming off an all-state season as a junior, when he averaged 17.7 points and eight rebounds per game and set a school record for field goal percentage at 60.8.

With only 20 percent mobility in his dominant right hand, he was forced to become ambidextrous. “Amazingly” – to agree with coach Josh Latz’ description – Vincent upped his scoring to 20.4 points per game, grabbed 7.7 rebounds and added 2.1 assists, a block and a steal per game – and broke his school record by making 62 percent of his shots from the floor.

Vincent learned to shoot free throws left handed and became a better ball handler as well. Despite being able to throw up only an occasional floater right-handed, he became the third 1,000-point scorer in school history and finished with 1,026 points, 441 rebounds, 86 blocks, 74 assists and 60 steals over a three-year varsity career.

“Carson's toughness and resiliency this season was incredible. To be able to accomplish the things he did individually, with the hand he was dealt is remarkable,” Latz said.

“His biggest growth was as a teammate with his unselfishness to put teammates and team success ahead of his health and well-being. That being said, the successes we had as a team were in direct correlation with Carson's leadership and the example of physical and mental toughness he set for us.”

Vincent knew exactly when he was injured. He caught a touchdown pass  running backward during that 7 on 7 about a week before the start of practice at the end of summer, and he fell – catching himself by falling directly on the wrist. 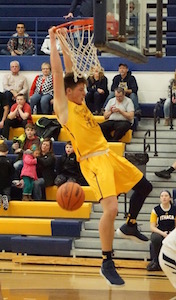 Despite some pain, he started football practice and did all the drills. A receiver and cornerback, he noticed when he dropped some passes he’d otherwise pull in – but he still helped the football team to a 7-3 playoff season.

On the day of the basketball team’s preseason scrimmage, he had the wrist checked out by a doctor who helps out with the Marauders. Diagnosis: broken and shifted bones. But Vincent already had made it through football season and decided to put off surgery until he could no longer manage the pain. He played in the scrimmage that day, although he couldn’t bend the wrist. He tried taping for a while, but gave up on that quickly because it just didn’t feel right.

And the difficulties didn’t come just at practice. Writing was doable but made his arm tired. Eating, even out of a bowl with a spoon, was not as easy as it would seem. Driving was a challenge for a bit. Sometimes he couldn’t open a door. He couldn’t shake people’s hands.

“Sometimes I’d get down on myself. Sometimes it’s frustrating,” Vincent said. “Before I went to the doctor’s office, I knew something was wrong with it – I wasn’t numb to the fact. Once I got told, obviously it was upsetting. All the what-ifs happen – what happens if I fall on it, will I be able to play, what if the pain is too much one day? It was really sad, but I got through it. I took it one day at a time. I wasn’t thinking about a week from now. I just got through what I could.”

He did sit out some parts of practice. Latz would pull him out of games to be cautious, but Vincent would ask right back in. A few opponents knew because they were Vincent’s friends, but mostly the team kept the injury an internal secret.

The Marauders’ season ended in a Regional Semifinal loss to Bridgeport on March 12, and three days later Vincent had surgery that included inserting bone from elsewhere in his arm and putting in a screw to hold everything together.

He’s wearing a cast now, and will switch to a splint in four weeks. He’s missing his track team’s first three meets, but will return after spring break next week – he runs the 200, 400 and on the 800 and 1,600 relays.

He’s planning to play college basketball. He has Division III opportunities and could also play at the junior college level to start out. Wherever he ends up, he’ll bring a much more well-rounded game – a lot of good that came out of what could’ve been a sad situation.

“First of all, (even without hurting) my wrist, if someone would’ve asked me if my team would do this, I would’ve told them I honestly don’t know,” Vincent said. “That alone surprised me. … It’s all shocking to me, to be able to do as good as a team, and I was able to do good individually also.

“Before this I was good left-handed, but I easily could say right-handed I was better. Now, honestly, my left hand is better than my right hand. I’ve learned new moves, I can do right and left hand now. Obviously I wish I hadn’t broken my wrist. But there were a lot of benefits to my game. I’ll take the good things and move on from it.”

PHOTOS: (Top) Carson Vincent chases down a loose ball against Bridgeport this season. (Middle) Vincent throws down a dunk against Ithaca. (Photos courtesy of the Ovid-Elsie boys basketball program.)