DETROIT – When you think of Detroit Cass Tech, one would probably think of its football program.

Why not? The program coach Thomas Wilcher has built there has been arguably the best in the state the past dozen years.

That fact doesn’t bother Steve Hall, the head coach of the Technicians’ boys basketball team. On the contrary, Hall, a 1988 Cass Tech graduate and co-athletic director (along with Wilcher), takes pride in it.

It also serves as motivation.

Hall is in his third season at Cass Tech, and when the next rankings are released his Technicians will be ranked No. 1 in Class A by at least one news service, State Champs Network, and likely others.

Cass Tech is 7-0 overall and 2-0 in the Detroit Public School League. The Technicians are currently on winter break and scheduled to play next against Detroit Henry Ford on Jan. 12.

That a PSL team is ranked No. 1 is common. Teams like Detroit Cooley, Detroit Pershing, Detroit Renaissance, Detroit Southwestern and, most recently, Detroit Western, all have been ranked No. 1 over the past many years.

But for Cass Tech, it is unusual. In fact, it is believed that a top ranking for a Cass Tech boys basketball team would be the program’s first.

Hall is careful not to boast or gloat. After all, it’s early in the season and nobody awards MHSAA championship trophies in January.

“It’s hard to feel great about being No. 1,” Hall said. “The last thing you want to do is exhale.”

The program has achieved success in the past but, truthfully, it’s been awhile. Before Hall took over, Cass Tech most recently had won two PSL titles under coach Robert Shannon, the last coming in 1998. During the late 1980s, when Hall was one of the state’s top players, Cass Tech reached the 1988 Class A Quarterfinals before losing to the eventual champion, Cooley. Cass Tech had defeated Cooley that season in the PSL quarterfinals. The 1993 team that won the PSL title made it all the way to a Class A Semifinals.

During the 1950s Cass Tech was a powerhouse in the city winning three PSL titles over the decade. As one might surmise, Cass Tech has never won a state title. And just once has it reached an MHSAA Final, as the Technicians lost to Birmingham Brother Rice, 60-56 in overtime, in the 1974 Class A championship game.

Last season Cass Tech defeated Detroit Martin Luther King, 59-47, to capture the school’s eighth PSL title. The Technicians won a District title for the first time since 2014 and finished 20-5, a vast improvement from the 11-10 record they posted in Hall’s first season.

As good as last season was for the program, it was just one step forward. Hall has set loftier goals.

His three-year plan included becoming regarded at the state level and nationally. That plan is on schedule.

“There were some dynamics that first year,” Hall said. “I was hired late and I didn’t have the kids during the summer. We beat (Detroit) Western, Benton Harbor and Orchard Lake St. Mary’s that season. It’s a tough league. The stable programs had upperclassmen leading them. It was a year of growth. I wouldn’t have the same appreciation (for the success) if we had won that first year. ” 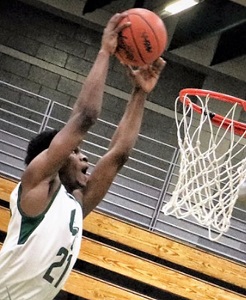 Though Hall is in just his third season at Cass Tech, he’s built a strong resume as a coach, within the PSL and at the collegiate level. High school basketball fans will remember the great Detroit Rogers teams in the early 2000s that won three consecutive Class D titles (2003-05) with Hall as head coach. When that school closed in 2005, Hall went to Detroit Northwestern and guided the Colts to the PSL title in 2008, Northwestern’s first league championship in 30 years. That season Northwestern reached a Class A Regional Final before losing to Pershing.

This team has talent, but is void of any one superstar. None of the four seniors are Division I recruits. Hall returned six players who started at least one game last season and the top senior is Randy Gilbert, a 6-foot-6 forward who signed with Ferris State.

There are Division I recruits coming up, however, including 6-3 sophomore Tyson Acuff and 6-5 juniors Kalil Whitehead and Tyland Tate.

Gilbert, who alternates between forward and center, is in his fourth season as a starter. He may not have made the varsity so early or with such an immediate impact playing at one of the city’s established basketball powers.

“Even going into my sophomore year people started to say things like I should transfer somewhere else,” Gilbert said. “I didn’t think about that at all. I thought we had potential.

“Coach Hall has been great to us players. He’s opened up a lot of doors. He takes us to a lot of team camps during the summer to different level of schools like Division I, Division II and NAIA so everybody gets a shot and to see where they can play (in college).

“I don’t look at Cass Tech being a football school now. We changed that.”

In the long run, that’s been one of Hall’s goals. Hall is a basketball coach, but he’s also a fan of all sports, in particular those at Cass Tech. He wants to see all of the athletic programs enjoy success, not just his team.

“When you’re a coach, it’s a way of life,” Hall said. “When I went to Cass our girls (basketball team) won the Class A title. I’ve been to Ford Field to watch the football team. I’ve been to their practices. I grew up around the school. My father (Ferd Hall) was an assistant principal here when I was growing up in the mid-70s. Cass Tech has always meant so much to me.”