On a recent evening at the home of Corunna boys basketball coach John “Rocky” Buscemi and his wife Chloe, the household is a whirlwind of activity.

Their daughter Charley, 5, darts in and out of the Buscemis’ home office to ask questions, mimic riding a horse, or whatever else comes to the mind of a little girl full of energy.

The only thing that would tell you that cancer had interrupted their lives for five months in the fall and winter is the hair that just now is starting to grow on Charley’s scalp.

Charley Buscemi is named after her grandfather, Charley Silm, who refereed high school basketball for 22 years in and around mid-Michigan when he wasn’t working on the farm. He often took his daughter, Chloe, to games he worked when she was a youngster.

“I remember packing up my little bag with snacks and watch my dad officiate,” Chloe Silm-Buscemi recalled. “Even though I didn’t play basketball, I grew up in the gym, just like Charley did.”

Her daughter has grown up watching her dad coach. She confidently refers to Corunna players as “her boys” and announces that she wants to coach with him some day.

Last summer, Charley was having trouble sleeping, and sleep apnea was diagnosed. Her doctor advised that removing Charley’s tonsils would likely eliminate the apnea. 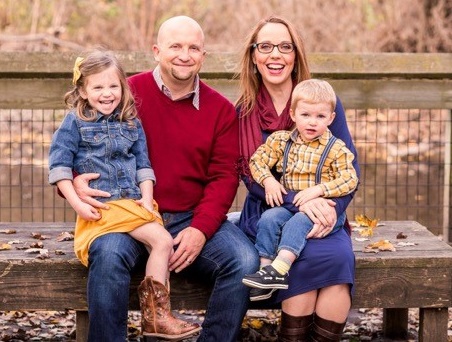 The Buscemis agreed, and her tonsils were removed Sept. 25.

“We knew nothing else,” Chloe said, “but apparently the doctor noticed that one of the tonsils looked abnormal, or a little awkward, so he sent it off for testing.”

Chloe said she was told that any complications might require another operation to stop bleeding in the area, but she was stunned when the doctor’s office called back Oct. 1.

“We didn’t know the testing had been done,” Chloe said. “We got a call that said ‘the findings of the pathology are consistent with a diagnosis of lymphoma.’ And we were like, ‘Wait. What?’ It caught us completely off guard. (Charley) was racing in circles around our kitchen island and our dining room table, and I was like, no, you’ve got the wrong kid here. There’s no way this kid has cancer.”

“Initially, it was, this can’t be right,” Rocky said. “I was trying to read between the lines and find some wording that gave some idea that this is what they think. I tried to hang onto the idea that there’s got to be more tests, and those tests will show us that it’s not (cancer).”

The diagnosis was correct. Charley had diffuse large B-cell lymphoma, the most common type of non-Hodgkin lymphoma. It’s a fast-growing cancer that affects B-lymphocytes, a type of blood cell that helps fight infection.

While it is a fast-growing lymphoma, it’s considered potentially curable.

The cancerous cells found in Charley’s tonsil were sent to the Mayo Clinic and the National Institute of Health, and the diagnosis was confirmed.

Charley began chemotherapy at Sparrow Hospital in Lansing and celebrated her fifth birthday there.

Chloe, meanwhile, was also navigating the second trimester of her pregnancy.

“I spent most of my second trimester sleeping on a cot in the hospital while she got chemo treatments,” Chloe said. 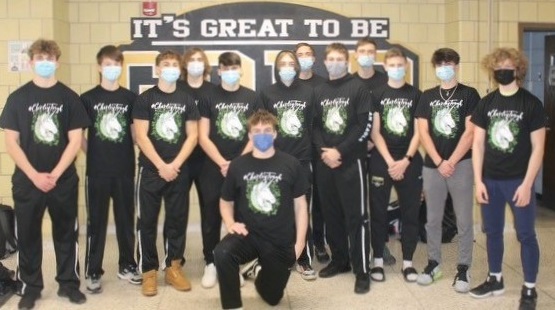 But once word got out, people in the Corunna school system, neighbors, fellow coaches and others reached out in the Buscemis’ time of need.

“The schools were so understanding,” Rocky said. “Once we found out, it was, go be with your family. Put in for your (Family and Medical Leave Act). Everyone was supportive from that end.”

The Corunna basketball players drove out to the Buscemi home and raked up its leaves. Some Corunna alumni got together to string up Christmas lights, the Orchard Lake St. Mary’s team sent her a giant stuffed panda, and many more showed support.

“We’re working on thank-yous now,” Chloe said. “My mom says people would know if you posted a thank-you (online), but I want to be able to send something out. Right now there’s something like 250 thank-yous.”

Charley had two rounds of chemotherapy and has been pronounced cancer-free. She has monthly meetings with her oncologist and quarterly CT scans scheduled for the next year.

“They’re watching her heart, because the chemo can affect that, so we meet with the cardiologist,” Chloe says.

“It’s a lot for a little person,” she adds as Charley flits back and forth between parents, announcing at one point she has cleaned her plate at dinner with no small amount of pride. “But for the most part, she’s just like this. She’s pretty happy, pretty easy-going, and takes it in stride. Sometimes I struggle with it more than she does. You feel totally helpless.”

For Rocky, the whole experience is full of silver linings, however hard-won.

“You’re always trying to find the silver linings,’ he said. “We had no idea she had cancer, but the silver lining was once we found out what it was, and it was confined to the tonsil, the blessing was it was almost a miracle we had her tonsils removed almost at the same time it was starting to develop. It wasn’t found anywhere else, so that’s a silver lining.

“Recently she’s been diagnosed as having celiac disease, and we’ve been given the OK to (shift) to a gluten-free diet. If she hadn’t had cancer, we might not have known until she was a teenager and had permanent damage. We’ve been so fortunate and blessed to find things out when we did.”

The Buscemis talk in tones of awe and appreciation for the caring and other gestures that have come their way.

“It’s incredibly humbling,” Rocky said. “It makes you want to do for someone else. I’m much more aware of people in need, and I hope to pay it forward. There are a lot of people you wouldn’t have anticipated reaching out who have reached out.”

The fear and stress of that time, he said, are often near, even with Charley in the clear.

“I wanted to be strong for Chloe and my family and be that rock that could be leaned on,” he said. “But man, oh man, there are still mornings when I drive to school and tear up. It’s nice to have other guys who understand that or have been through it. I’d be the rock here (at home) and then I’d be emotional with my friends in the coaching fraternity.”

Charley and 3-year-old brother Sam were mainstays at practice last year, playing quietly in a corner of the gym while the team practiced. Charley was at most every game, and Rocky always made a point of looking for her and her mother in the stands.

That hasn’t been the case this year, as Charley’s immune system has been weakened by the chemo and has kept her at home this season, watching the Cavaliers play on her mother’s laptop.

There’s been another change, too. 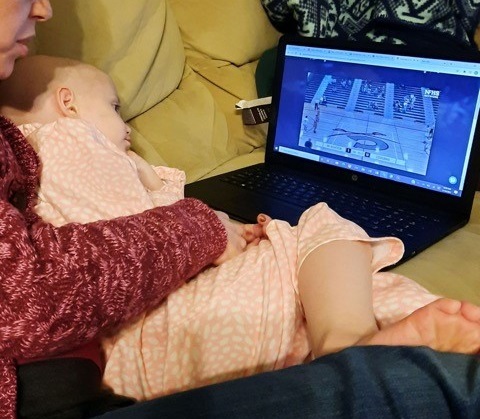 “I’ve adopted a one-day-at-a-time, appreciate-every-moment approach,” Rocky said. “A year ago in 9-degree weather, I might have been trying to find reasons not to go outside. Now if Charley wants to go sledding, we’re going sledding!”

He laughs as he says that, a man who has a new appreciation of things.

His players have been honoring her, too, wearing black T-shirts at warmups with a large unicorn on the front with the hashtag #Charleytough and the Corunna logo on a basketball.

As for Charley, she will go back to kindergarten next year, but at the moment, she’s anxiously awaiting the birth of her brother or sister March 22.

She already has informed her parents that her new sibling will be a girl, named Maggie, and wants the newborn to sleep in her room.

“She says, ‘Mommy, I’ll feed the baby,’” Chloe said, chuckling. “I told Rocky we don’t have to worry about parenting a third baby. Charley’s got it.”

Besides another new brother or sister, if all goes well, Charley will be back on the sideline with her dad and her basketball team next winter.

Rocky says his family’s experience, among other things, showed him how strong the ties are in the coaching community.

“It was nice to see the game be the bridge that allowed me to reach out and depend on people a little bit,” he said “Without it, you don’t have those relationships. Things like this make you realize how special those things really are. If you don’t experience it, you don’t get to understand people’s true motivations.

“It was humbling,” he added. “It was scary at times, but all in all it was a little bit of everything that helped us to be able to get through this.”

PHOTOS: (Top) Charley Buscemi and her dad Rocky enjoy a fun moment at home. (2) From left: Charley, Rocky, Chloe and Sam Buscemi. (3) Corunna players wear #Charleytough T-shirts as warm-ups for their games. They prominently feature Charley’s favorite animal, a unicorn. (4) Charley’s immune system isn’t robust enough for her to attend games in person, but she never misses a chance to watch “her boys” play on her mom’s laptop. (Photos courtesy of the Buscemi family.)