EAST LANSING – Southfield Christian began this winter minus two starters who left the program for other schools and with just two wins in its first seven games.

In early January, the Eagles faced a decision to guide the rest of their season.

“Our conversation repeatedly after a couple of those games was we’ve gotta choose if we’re either going to be great, of if you’re going to be OK and we’re going to be OK with being .500 and just being average,” Southfield Christian coach Josh Baker recalled Saturday. “Beat some teams, and lose to some better teams and call it a season.

Once again, Southfield Christian figured out the rest. The Eagles finished 19-1 after that opening stretch and finished Saturday as a repeat MHSAA champion with a 63-39 win over Frankfort in the Division 4 championship game at Michigan State University’s Breslin Center.

The title was Southfield Christian’s fifth this decade. In addition to last season’s, the Eagles also won Class D in 2012, 2013 and 2014.

The team’s only loss since Jan. 5 came to River Rouge, an eventual Division 2 finalist.

“This is very sweet. I’m not going to lie to you,” Eagles junior guard Da’Jion Humphrey said. “We worked hard – me, Jon (Sanders), everyone on the team, we put in countless hours. And as you can see, it pays off. Southfield Christian basketball is still here, and we’re still thriving.”

Humphrey and Sanders, a senior guard, were returning starters from last season’s team. They took on bigger roles as Harlond Beverly – the leading scorer in last year’s Class D Final – left for a prep school, and Caleb Hunter transferred to Detroit U-D Jesuit. 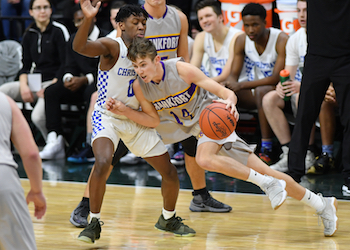 The Eagles jumped out to a 13-2 lead over the first 3½ minutes, and pushed the advantage to 24-12 by the end of the first quarter despite Frankfort making 63 percent of its shots from the floor during the period. The Panthers’ problem was they struggled to get many off, with eight of their 16 turnovers also coming over the first eight minutes.

Rheker scored Southfield Christian’s final basket of the first quarter and five more points during the first six minutes of the second as the Eagles extended their lead to 21.

“I was really trying to bring a spark, because I knew our biggest emphasis was to try to pressure the ball and really get after it,” Rheker said. “So I just really tried to set the tone and let these guys pick it up after me.”

Senior guard Will Newbold led Frankfort with 17 points and seven rebounds. With the game decided in the fourth quarter, the coaches emptied their benches. Panthers’ freshman Blake Miller quickly became a fan favorite during his hustle-filled four minutes – he ended up the team’s second-leading scorer with seven points to go with a pair of steals.

“The moment can kinda get you, but I thought our guys did a good job,” Frankfort first-year head coach Dan Loney said. “They didn’t back down. They played to the end. And as a coach, you couldn’t be happier.

“Look at the crowd out there. You see the kind of community we come from. We’re down 30 and they’re cheering like we’re up. As a coach, I really can’t explain the feeling when you see that. … The future is going to be bright in Frankfort, and we plan on being back here.”

Loney’s team finished 21-6, and the trip to the championship game was made more impressive by the fact the Panthers had graduated all of their starters and a top sub from last season’s 20-3 run.

“The fans and the crowd, it was so much different than back home,” Frankfort senior forward Jack Reznich said. “To be able to see all our fans, come out and see the (U-D) Jesuit school, all of them cheering for us. Just having everybody here, see all the lights and noise, it was a crazy feeling. It was life-changing.”

PHOTOS: (Top) Southfield Christian’s Jon Sanders (10) gets a shot up over Frankfort’s Conner Smith during Saturday’s Division 4 Final. (Middle) Will Newbold works to drive past the Eagles’ Rahmon Scruggs.