EAST LANSING – Wyoming Tri-unity Christian on its own has been plenty to contend with for Class D opponents over the last two decades.

At Michigan State University’s Breslin Center, the Defenders have been nearly unbeatable – which wasn’t good news for first-timer Powers North Central on Thursday.

The top-ranked Defenders – champions on this floor only two seasons ago – improved to 12-4 in playoff games on MSU’s home court with a 51-36 Semifinal win over the Jets. Tri-unity will face reigning champion Southfield Christian at 10 a.m. Saturday in one more Breslin game to finish the season.

“It’s going to give me a little bit of an advantage,” said Tri-unity senior Joey Blauwkamp, who also started on Defenders’ 2011 championship team. “It gives me just a feel for what’s coming.”

Tri-unity (25-2) has four titles over the last 17 years, and coach Mark Keeler’s recipe is proven – the Defenders haven’t had a losing season since 1992. 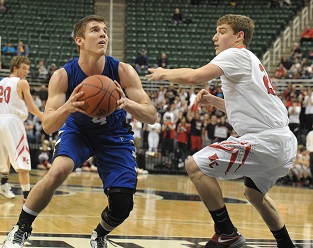 Once again this winter, Tri-unity played about one third of its regular-season games against Class A and B schools, and in the process built an edge that likely contributed to a deciding fourth-quarter run in this Semifinal.

“Those are the games that really make it so when we go here, we’re ready for this atmosphere,” said Keeler, who is finishing his 26th season. “And this game will help Powers next year. You’ve got to be in it to experience, carry it out. That’s just the way it is for us.”

For playing its first tournament game at Breslin – and coming off its first Regional title in 29 years – No. 10 North Central (23-4) didn’t show any signs of being uncomfortable in the cavernous surroundings.

The teams were tied 27-27 into the final seconds of the third quarter.

But that was despite North Central scoring only one field goal in the period. Blauwkamp dropped in a basket at the quarter buzzer to give the Defenders a two-point lead, and it seemed to get the ball rolling for a big Tri-unity fourth quarter.

“It was a little bit deflating, especially because we were struggling offensively at the end of the third quarter as well,” Jets coach Adam Mercier said. “If we got that one stop, we get the ball coming out of the fourth quarter and maybe make a run. That was a little blow to us mentally.”

Tri-unity held the North Central to only one field goal in the fourth quarter as well, and it didn’t come until 1:19 remained in the game. Meanwhile, Defenders senior Daniel Cole scored 11 of his game-high 18 points as his team pulled away.

Blauwkamp added 10 points and 14 rebounds for Tri-unity. Most impressive, it was the 15th time this season the Defenders held an opponent to 40 or fewer points.

“We rely so much on good defense. We trust one another, and we’ve been playing with one another since … seventh grade at the latest,” Tri-unity senior Evan Przybysz said. “So we know one another. We’ve got each other’s backs. And we know how to get stops when we have to.”

But here’s the kicker: The Jets won’t graduate anyone from this season’s roster, allowing them the opportunity to build off some of the experience Tri-unity uses so well to its advantage.

“It was the first end-of-the-season speech where I didn’t see any tears. They’re hungry for more,” Mercier said. “If we do the right things in the offseason, individually pick it up and get better, I hope the kids will be back in the same position next year. This was a great experience for our kids to be here against a great team … and they’ve got a hunger in their eyes.”