ERIE – When Kevin Skaggs was named the boys varsity basketball coach at Erie Mason, he immediately got on the phone and started asking questions.

After more than two decades coaching basketball, Skaggs was about to embark on something new – high school basketball.

“All of my 22 years was in college coaching,” he said. “I reached out to a lot of different high school coaches, coaches that I had known over the years. … It’s mind-boggling how you have to fit all of the pieces together to build a program.”

Whatever those coaches told Skaggs, he should box it up and sell it.

Skaggs took over an Erie Mason program that occasionally had success but was often the team on the schedule other schools wanted to face. Those days are just a memory now. In his eighth season, Skaggs has become the school’s all-time winningest coach, recently leading the team to its first-ever outright Lenawee County Athletic Association championship. His team also is in the midst of a 13-game winning streak, the longest in school history.

What’s more is the success doesn’t appear to be a blip on the screen. Mason has had five consecutive winning seasons for the first time in school history and its top scorer – the top scorer in Monroe County – is just a junior.

“I think we are starting to make (other schools) believe,” Skaggs said. “We want to be one of those opponents that when we walk into the gym, other teams say, ‘oh, no,’ instead of ‘oh, boy.’”

Those days are here. Earlier this week, Mason knocked off Petersburg-Summerfield, 64-44, in a non-league game. The Bulldogs came into Erie with a 15-0 record and a top 10 ranking in the Associated Press poll but were handled by the Eagles.

Mason followed that win with an 89-50 victory Thursday over Hudson to clinch the outright LCAA championship, the first since they joined the LCAA in 1988.

Erie Mason has a Saturday date this week with LCAA rival Dundee with a chance to improve to 15-2 on the season. Mason hasn’t won 15 games in a season since 2003-04 and has done so only three times since the school debuted in 1961-62.

All of the wins, high-powered offenses (Mason averages 67 points a game and has made 126 3-pointers as a team) can be traced back to when Skaggs first got to Mason and, on the advice of coaching friends, started a youth basketball program, the Junior Eagles. Those first-year kids eight years ago are now the ones Skaggs sees in the huddle during timeouts.

“They are from that first group of our youth program, and you can get a sense of that,” he said. “They love basketball. That was a big step for us.”

Skaggs, 63, brought together others in the community to put together the youth program for boys and girls. While Mason has had success in other sports – the football team won the Class C championship in 1987 – basketball had lagged behind. Now, he said, that culture has changed. It happened, he said, because student-athletes started loving the game of basketball.

“What you want to teach is to teach them to have fun with the game,” he said. “If you get the kids to fall in love with the sport, they will pursue it. You want to be able to keep kids interested and with a ball in their hands.”

The program aims at teaching the game, making sure kids have fun and, then, around the fifth- and sixth-grade level, increase the competitiveness. By middle school, the basketball players are able to compete with other teams on the Mason schedule. By high school, they are used to success and hungry for more.

“Our eight-grade team had a tremendous year, and our seventh-grade team was pretty good,” Skaggs said. “It’s starting to cycle through, which is wonderful to watch.”

Skaggs also said he’s noticed that athletes aren’t leaving the district to go play for other schools like was once the case.

“We’re keeping our players in our school,” he said. 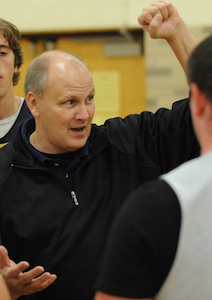 Skaggs earned his master’s degree in sports administration and bachelor’s degree in social work at Western Michigan University, where he met coach Dick Shilts. He was directing Christian-based basketball camps in Michigan and Ohio before becoming an assistant coach at Kalamazoo Valley Community College under Shilts and enjoying monumental success. After six years there, he became head coach at Alma College from 1995 to 2001, going 53-98. His second Alma team went 14-12 and won a Michigan Intercollegiate Athletic Association tournament game for the first time in school history. After moving to Erie, Skaggs got an assistant coaching job at Owens Community College in northwest Ohio. He was an assistant five years with the Express, including three years as a volunteer coach, before becoming the head coach.

In 2011, he was named the head coach at Erie Mason, a school just north of the Ohio border that had just a handful of winning seasons in its history.

“Mason was a no-brainer. I was 55 and getting a little tired of getting on a bus and going three to four hours away for a game,” he said. “Plus, my son was playing and I was missing watching him.”

His family has been a major part of his run at Mason. Sons Isaac and Jacob have both either played or coached with him his entire time at Mason.

“What’s a better place to start than with your family?” he said.

He also found community members Tom Banachowski and Brad Liedel to serve as assistant coaches. He delegates what he calls “meaningful responsibility” to his assistants to help the workload and to build continuity in the program. One thing he doesn’t delegate is the Eagles’ offense.

“I’m greedy when it comes to offense,” he said. “That’s mine. There’s nothing like watching an offense that moves the ball and goes. It’s exciting and fun to watch.”

For the past couple of seasons, the Eagle most fun to watch has been Joe Liedel. The 5-foot-11 junior recently moved into second place on the school’s all-time scoring list. With 1,229 points through 16 games this season, he’s well within reach of the school’s career leader, J.P. Horne (1,455 points).

“If Joe Liedel was 6-foot-3, every Division I school would be calling on him,” Skaggs said. “He’s one of the most complete kids I’ve coached in 35 years – and I don’t say that easily.”

Liedel has been sensational this season. He’s the top scorer in the LCAA, and has had games of 41, 37, 37, 34 and 31 while shooting 51.4 percent from the floor, 86.9 percent from the free throw line and leading the team in assists and steals.

“He’s really a complete player, offense and defense,” Skaggs said. “When he thinks there is a weakness in his game, he identifies it and works on it. He’s always been good at shooting, but now he can get to the basket. It adds to his game.”

When they get to the postseason, Erie Mason will be trying to win its first District championship in 46 years. The 1972-73 team won District and Regional championships. It won’t be easy as the Division 3 District at Blissfield is loaded with talented teams, including Summerfield (15-1), perennial power Monroe St. Mary Catholic Central (11-3) and Clinton, which just knocked off 10th-ranked Quincy.

Skaggs is drawing on his college coaching days to keep his players focused on next-level goals.

“Our first goal was to win the LCAA, and we’ve done that,” he said. “Next, it’s the District. Every game we play in now is a test to get ready for the state tournament. You have to keep the focus on one game at a time. We’ve been able to do that. We’re still having fun.”