We’ve been here before, but not in this way.

The last time was for a retrospective, covering one of the most impressive and awe-inspiring prep careers in Michigan high school history. That time was in print, and included a handful of still images that tried to illustrate the unbelievable.

But this time, the story is in documentary form. It’s woven together from grainy, scratched, faded silent film, a format of capturing memories familiar to thousands of people from generations past, as well as a series of modern-day high-resolution interviews.

Here, the basketball life of the athlete known as the “Fennville Flash” delivers on many levels. Yes, there is a Richie Jordan.

JordanVille, a documentary by John Mooy & Anne Colton, recalls a time when legend spread via word of mouth, newsprint and AM radio.

While it’s hard to comprehend for many today, the exploits of our athletic heroes were formed by “poets in the press box” who sat with pencil and paper, a typewriter, a microphone or a telephone, and described to their audience what they witnessed. On the receiving end, readers and listeners conjured up visualizations based on the facts, phrases and superlatives designed to create an image.

“Traveling left to right on your radio dial” helped listeners feel they were a member of the crowd, seated in the stands, in on the action and a witness to the mayhem. “Packed to the rafters,” reminded fans the importance of what was happening. An exciting game, presented by those with skill, created an event you longed to see. If a broadcast couldn’t be picked up on a transistor or tube radio, the final result might not be known, at the earliest, until the following day’s newspaper arrived.

I’ve told Jordan’s story via the MHSAA before; how he latched on to athletic training, weights and repetition to mold himself into a well-rounded athlete, able to leap to heights unexpected for a kid with a 5-foot-7 frame. The tales of his unfathomable accomplishments slowly leaked beyond the city limits of Fennville into Kalamazoo and greater Southwestern Michigan, then to Detroit. When Detroit Free Press writer Hal Schram relayed Jordan’s feats, the secret traveled across the state and beyond its drawn borders.

From there the legend of Jordan’s accomplishments grew. In Fennville, as in many small towns across the country, the city shut down when a game was played. The Jordan story was so enticing that thousands would travel vast distances to see him play with their own eyes. Today, his single season scoring average of 44.4 points per game during the 1964-65 campaign still remains the top mark in the MHSAA record book. 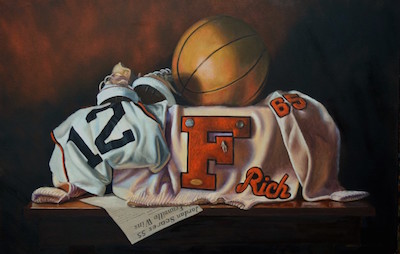 JordanVille runs just shy of a half hour. Contained within is insight into the athlete that is challenging to relay in print form. Thanks to access to home movies and a series of interviews with Jordan, former teammates, past opponents and his high school coach, the determination, dedication and drive of a kid who wouldn’t let physical size be a deterrent from achievement radiates from the screen. On display is small town America at its finest, and perspective formed over 50+ years.

For Mooy, it completes a filmmaking journey started six years ago. But the story of Jordan, in his eyes, date back to his school days. Mooy first heard about Jordan as a 7th-grader from a math teacher. A second-team all-St. Joseph Valley League selection, Mooy played at Marcellus High School and scrimmaged against Jordan and the Fennville Blackhawks.

He couldn’t believe his eyes.

“Everyone wanted to see this kid play,” said Mooy in 2011. “He was the first high school player I saw sign an autograph.

Today, with the interviews complete, and the film ready for viewing, Mooy sees more than just a sports story:

“With the benefit of years now passed, I look at the Rich Jordan story with a new respect. JordanVille created a place that was welcoming no matter who you were, or what color your skin happened to be. It was the 1960s. Rich was growing up Jewish, the Civil Rights Movement was in full swing, and the Vietnam War was on everyone's mind. And in Fennville, Michigan, from 1961 to 1965, the Jordan high school years, there were lessons beyond sports being learned by everyone that would last a lifetime. The Jordan household, under the guidance of (his parents) Tuffy and Sylvia Jordan, is where the story begins."

The film speaks of a time that has departed. Competition for our attention was less focused; phones hung on walls or sat on tabletops, communities were tighter, the training table featured peanut butter and chocolate milk instead of protein powder. A city could easily be renamed for a day.

The film also reminds us that those days were far from perfect.

If all goes as planned, the public will see the finished product come the flip of the calendar. In West Michigan, JordanVille is scheduled to show on New Year’s Day at 6 p.m. on WGVU, and will repeat on WGVU-Life at 7:30 p.m., Friday, Jan. 5.

Seek it out, and spread the word, just like in days of old.