“It’s really unexplainable right now,” Fife said. “I really don’t know how to put it. All I know is I’ve been through three high school gyms at Clarkston during my tenure. I’ve said this before, but I really truly meant it: Clarkston’s a special place, I think one because we have one public school in our district. We have great support from our administration, our teachers and our families. I don’t think you can be successful in athletics, especially in today’s world of athletics, if you don’t have that support.”

Fife, who has a 677-169 record at Clarkston, is a 1967 graduate of the school. He took over the program 1982, and in his 35 seasons, only one has ended without a winning record. Even that season included a District title.

“This whole season has been a group journey,” Clarkston all-state junior guard Foster Loyer said. “For my teammates and myself to come out here and win this state championship tonight, it not only means everything to us as players, as a team, as a family; but just knowing we were able to get that done for Coach Fife, it’s what we’ve been dreaming about since we started playing basketball here in Clarkston. It’s just been a phenomenal experience, and we’re loving life right now.”

Loyer, a Michigan State recruit, led all scorers with 29 points on his future home court, shooting 50 percent from the field (8 of 16) and from 3-point range (4 of 8). His future MSU teammate, senior Xavier Tillman, led Grand Rapids Christian with 25 points on 12 of 15 (80 percent) shooting, and grabbed seven rebounds.

“I give Clarkston a lot of credit – they’re well coached, their kids played great, they played hard, and they responded and made shots,” Grand Rapids Christian coach Mark Warners said. “The ball didn’t always go our way, but that’s the way the game goes. They were awesome tonight. We were good, but we weren’t awesome.”

Fife lauded his team’s overall effort in the game, as Robinson’s secondary scoring – specifically 12 second-half points – and ballhandling were able to take pressure off Loyer, and Currie was able to hold his own at times and stay out of foul trouble against Tillman despite giving up more than 50 pounds.

“We knew that (Tillman) is a great force in the paint,” Currie said. “My main focus going into the game was just try to stay in front, knowing I had help in the back. If I could force a pass over the top, it could be a steal. Then when he got the ball, trying to stay straight up and avoid getting into foul trouble. And keeping him off the glass, that was something we really keyed in on because he’s a great rebounder, especially on offense. He uses his body really well, so I was trying to box out as soon as I could.” 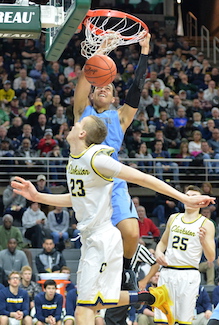 Clarkston (27-1) gained the game’s first bit of separation with 3-pointers on four straight possessions to close out the first quarter. Loyer hit three in a row, while Alderson added one at the buzzer to give the Wolves a 20-12 lead.

They led by as many as 11 points in the second quarter, as Loyer opened it with another 3. Grand Rapids Christian (27-1) pulled to within three on a 3-pointer from Tre Vallar in the final minute of the half, but an acrobatic buzzer beater from Robinson gave Clarkston a 34-29 lead heading into the break.

Grand Rapids Christian had a better half from the field, shooting 57.1 percent compared to Clarkston’s 40 percent, but the Wolves held an 8-0 edge in points off turnovers and an 11-2 edge in second-chance points, as they pulled down nine offensive rebounds during the opening 16 minutes.

The hot shooting continued for the Eagles into the third quarter, but they weren’t able to close the gap, as Clarkston was just as hot, hitting 75 percent of its shots in the third quarter and 60 percent in the fourth. The Wolves also shot 14 of 17 from the free throw line (82.4 percent) in the fourth quarter.

“We scored 69 points, so offensively we were fine,” Warners said. “The problem is we gave up 75. The credit goes to, like I said, to Clarkston. We just didn’t have an answer consistently. We’d get a good defensive possession and then we’d come down and not capitalize on it, miss a shot. Then they’d come down and make a shot.”