Cameron Martinez is not done having fun in high school.

But unlike the rest of the Buckeyes’ incoming class, who are either specializing in only football or have already left their high schools and early-enrolled in Columbus, Martinez is playing a key role for the Big Reds’ state-ranked basketball team.

“I want to enjoy being a high school kid as long as I can,” said Martinez, who rushed for 6,491 yards and 145 touchdowns during his four-year varsity football career, with his first two years at Muskegon Catholic Central and the last two at Muskegon High.

“I really do enjoy playing basketball, and we want to make a long run. We still haven’t played our best game yet.”

Martinez is not the only Division I football signee who chose to honor his commitment on the hardcourt for Muskegon.

Billie Roberts and Jordan Porter, who both will play defensive line at Bowling Green, provide valuable muscle inside for the Big Reds, who are ranked No. 7 in Division 1 in the latest Associated Press poll.

Muskegon is 10-1, with its only loss coming Jan. 4 against visiting Chicago Curie, the top-ranked team in Illinois. In addition to being perfect in Ottawa-Kent Conference Black play, the Big Reds have pulled out tight nonleague wins over Rockford, East Kentwood, Ferndale and, most recently, Saginaw on Saturday at the Redhawk Showcase in Grand Rapids. 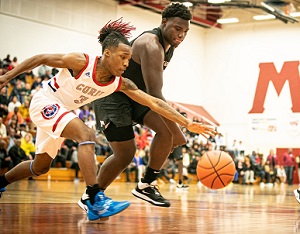 Muskegon coach Keith Guy, who also happens to be the stepfather of Martinez, shudders at the thought of not having the three Division I football recruits on his team.

“We do things a little different around here,” said Guy, explaining the symbiotic relationship between the Big Reds’ football and basketball programs. “I am thankful that these guys play football. They bring physical toughness, leadership and just an expectation of winning.”

Martinez, a 5-foot-11, 190-pound guard, averages 3.2 points and 2.3 rebounds per game, but his big contribution is as the team’s defensive stopper. While in football he electrified the crowd with his offense (Exhibit A: His seven rushing touchdowns in this year’s playoff opener against Marquette), in basketball he brings the fans to their feet by locking down on the opponent’s best player.

“It’s a lot like playing defensive back, where you are guarding someone 1-on-1,” explained Martinez, who is projected as a defensive back and kick returner at Ohio State.

Roberts, a 6-5, 270-pound post player, has been slowed and often sidelined by a lingering stress reaction in his fibula, and is averaging just one point and one rebound per game.

Guy, who led Muskegon to the Class A championship in 2014, said his big man is starting to get healthier, which will be critical as the team chases its ultimate goal of another Finals title.

Porter, a 6-4, 240-pound forward, brings size and versatility off the bench. He averages 2.5 points and four rebounds per game.

“Basketball helps me so much,” said Porter, who is projected as a defensive end and hybrid lineman/linebacker at Bowling Green. “Obviously, it helps me conditioning-wise. But it really helps with footwork and moves.”

Muskegon High School gets more than its fair share of visits from college football coaches, and many ask to watch basketball practice to get better looks at their prospects’ athletic abilities. Those coaches especially like to see how well linemen prospects like Roberts and Porter can move. 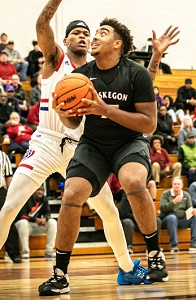 “I got my first offer from Indiana in my sophomore year because of basketball,” said Roberts, who went 52-4 during his four-year varsity football career and played in four MHSAA championship games at Ford Field. “They knew I had good size, but they saw that I could run and move and I think that’s why they offered me.”

Roberts is starting to move better every day, according to Guy, and Guy said that’s a big reason for his team’s improved play of late. After a narrow win at Ferndale on Jan. 20, the Big Reds blew out four straight conference opponents before Saturday’s dramatic win over Saginaw.

Guy sported an Ohio State football T-shirt during Wednesday’s signing event, but his mind was on this weekend’s big back-to-back games – Friday at Grand Rapids Union and Saturday at home against Grand Blanc.

He expects Muskegon’s historic Redmond-Potter Gymnasium to be rocking and rolling Saturday, when Grand Blanc, 10-3 and an honorable mention in Division 1, rolls in with standout 6-5 sophomore Ty Rodgers.

Muskegon will counter Rodgers with a veteran team, including five senior starters and one of the state’s best backcourt duos in Jarvis Walker and Vernon Nash III. Walker, a Mr. Basketball candidate, averages 21.5 points, 5.5 rebounds and 2.1 assists per game, while Nash averages 14.8 points.

The X-factor in Saturday’s showdown might be the Big Reds’ “football guys,” who Guy hopes will give his team a physical and mental edge.

“There’s nothing like high school,” explained Roberts, flashing a big grin. “I could have early enrolled, but I didn’t want to miss my senior basketball season and prom and all that. I want to stay a kid a little bit longer.”