ADRIAN – It’s hard to imagine a 15-year-old having a better week on the basketball floor than Joe Francis had last week.

On the doorway that leads into the Adrian Gymnasium, the school lists all the Maples’ basketball record holders. It may hold off a while before switching Francis’ name with the previous record holder for single-game points, Chris Howard. That’s because Francis has his eyes on breaking that record again. And again.

“I’m not really worried about it right now,” he said. “I’m not satisfied. I’ve got a lot I have to work on still. I feel like I can beat that record, but I just have more work to do.”

Jordan Kelly, an Adrian graduate, became coach of the Maples before last season. One of his first decisions was to put the then-freshman Francis on the varsity. Francis had a steady season with the Maples, concluding it with a season-high 11 points in their Division 2 District loss to Chelsea.

That set the tone for this season.

“Over the summer we had a team meeting,” Francis said. “We set goals and talked about what we wanted to accomplish this year. The seniors and the captains are just stepping up. We were missing the communication part, but we are better now.”

The three-game win streak was Adrian’s first in what has been a trying couple of seasons. But the Maples are 4-4 this winter, and Francis is leading the way.

“He’s the epitome of a gym rat,” Kelly said. “He gets guys together to play. He always wants to be in the gym. We sometimes have to make him take a rest day.”

Francis is from Adrian. His dad, Joe, played college basketball in Missouri and is an assistant coach with the Maples. His mom, Tammy, ran track at Saginaw Valley State University and is the boys and girls track coach at Adrian. Athletics always have been important in the Francis house.

Francis has played summer travel ball for a couple of seasons now. Playing on the varsity last year as a freshman didn’t faze him. 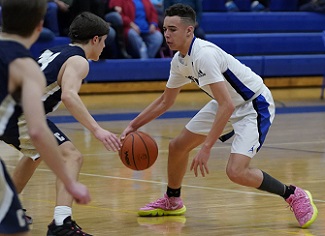 “For my teams, I’ve always played up,” he said. “We played against some of the best players in the state.”

Francis not only has matured, he’s also grown up. He was listed at 5-foot-9 on Adrian’s roster last season. He’s almost 6-3 now.

“He’s maturing so much, even since September,” Kelly said. “He’s learning. He’s working on his leadership skills. It’s been very cool to watch him grow.”

Francis gives a lot of credit for his success to Kelly.

“We’re trying to start a new standard,” Francis said. “Coach Kelly keeps talking to us about turning Adrian basketball around, to turn it back to what it used to be. That’s very important.

“He works us hard. He knows how good we can be if we just do the little things and play together. I give a lot of props to him.”

Despite reaching double figures in three of Adrian’s first four games, Francis felt the start to his season wasn’t what it should have been. So, he did what he knows best – got into the gym.

“Over Christmas break I worked a lot with my dad on my shot,” he said. “I had been struggling with my 3. We got into the gym, and I found my groove again.

“We’d start with ball-handling, using the heavy balls for about 15 minutes, then we’d work on spot shooting and then shooting 3-pointers.”

Against East Jackson, Francis made 15 field goals – including two 3-pointers – in the first game back from the break. It was impressive, but four nights later he popped in 42 against Manchester, making 18 field goals, including four triples. Oddly enough, he didn’t score in the first quarter.

He went to the Adrian bench in the fourth quarter with 39 points, but came back in, converted a pair of fastbreak layups to break the record, then went back to the bench. Three days later, he had perhaps his finest performance on the road at Monroe.

He got off to a slow start but came to play in the fourth quarter and overtime, scoring 22 of his 32 points during the last 12 minutes. The halfcourt shot to tie the game brought Adrian back from what looked like a certain loss.

“I got the ball on an out-of-bounds play,” Francis said. “I knew I could hit that shot. I had a lot of confidence. I broke the press, and when I saw there was just two seconds left on the clock, I just shot it.”

The Maples were down 11 and missing three starters who fouled out, but got on Francis’ back and won the game in overtime.

“He’s going to have a lot of success because of his work ethic,” Kelly said. “This is what he’s worked for. He gets guys playing. We challenge him. We have some good defensive players go up against him because we want to make him better.”

Playing in the rugged Southeastern Conference helps, too.

“There’s definitely some top-tier talent in the league,” Kelly said. “If he can hold his own in our league, he can play anywhere.”

PHOTOS: (Top) Adrian’s Joe Francis elevates to get a shot up over a Chelsea defender Tuesday. (Middle) Francis works to find an opening from the top of the key. (Photos by Mike Dickie.)