MAPLE CITY – When the Glen Lake boys basketball team went on a team-building retreat, coach Rich Ruelas asked his players to pick a word that would be their mantra for the season.

“Coming into my senior year, it hit me,” the three-sport standout said. “This is my last go-around for every sport. I thought, what kind of legacy do I want to leave, that our team wants to leave? It’s like footprints in the sand. How do you want to be remembered? This is a journey. Depending on how we play, how we act, we can be remembered here for years and years and years. That’s a big thing to grasp.”

The Lakers return nine players, including four starters, off an 18-5 squad that reached the Class C Regionals.

They are not the only Glen Lake basketball team that wants to leave a footprint.

The girls return five of their top seven players off a team that went 23-4 and played in the MHSAA Semifinals.

“We have experience, and a deep bench,” senior Savannah Peplinski said, reflecting on the team’s strengths. “We’ve all improved our skills. We’re tougher, mentally and physically. We’re focusing on individual things that combined will make us more complex as a team.”

It promises to be an exciting winter on the hardcourt at this Leelanau County school, where basketball tradition runs deep.

Glen Lake won boys Class D state crowns in 1959 and 1977 and was runner-up in 1996. The 1977 team, which upset Detroit East Catholic in the Final, celebrated its 40th anniversary of that championship this summer. The reunion was organized by Hall of Fame coach Don Miller, who has returned to the sidelines as the JV coach.

The Lakers claimed a girls state championship in 1978 and lost a heartbreaker in the 1979 Finals. Glen Lake has produced two of the best players to ever come out of northern Michigan – Laura Wiesen and Liz (Shimek) Moeggenberg, now the JV coach. Wiesen, a math teacher at the high school, is among the all-time assist leaders at Northwestern University while Shimek is Michigan State’s third all-time leading scorer (1,780 points) and the leading all-time rebounder (1,130).

The girls team returned to the spotlight with last season’s tournament run, which ended with a loss to Pewamo-Westphalia in the Semifinals.

Coach Jason Bradford said that run made believers out of his players.

“I told the girls they had the capability to go that far,” Bradford, now in his 10th season, said. “But I don’t think they believed it until they actually did it. It was a confidence builder, making it down (to the Semifinals).”

“Last year really opened our eyes as to how much talent we do have and how much harder we have to push ourselves to reach our potential,” the 17-year-old said.

A District win over nemesis Traverse City St. Francis, which had played in the Class C Final the previous year, catapulted the Lakers. 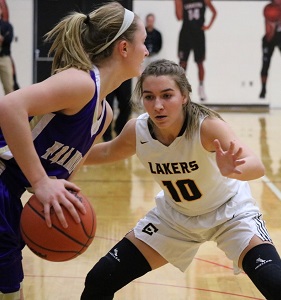 Glen Lake, which tips off its season tonight at Elk Rapids, has a solid nucleus with returnees Peplinski, Jennifer LaCross, Kaitlyn Schaub, Allie Bonzelet and Lily Ewing. LaCross averaged 10.8 points per game a year ago while Peplinski was at 10.1. Schaub, a 6-foot junior, led the team with seven rebounds a game.

“Jennifer is a forward-center, but she can play any position,” Bradford said. “She handles the ball well. She’s hard to guard. Kaitlyn’s our post player. She’s an inside-outside (threat). She has a soft touch around the hoop, and she can step out for a shot. Savannah is going to have the ball in her hands, dictating. She’s a great passer. We’re going to be pushing the ball.”

LaCross, Peplinski, Bonzelet and Schaub all saw time on the varsity as freshmen, Bradford said.

“They’ve played a lot of minutes together,” he said. “It’s a fun group, very unselfish and very supportive of each other. They accept their roles. They want to be part of this team and that’s half of it, if not most of it.”

Bonzelet is one of the top defenders on a team that prides itself on defense.

“It’s going to be tough to fill those holes,” Peplinski said. “But we’re working at it and building our confidence back up. I think it will be a good season.”

Sophomore Karrigan LaCross and freshman Hailey Helling are stepping in to provide the Lakers with added depth.

Glen Lake, which has won 32 consecutive Northwest Conference games, will be challenged by Kingsley and Benzie Central, which both opened the season with double-digit wins over teams from the larger Big North Conference. Frankfort is traditionally strong, too.

“It’s going to come down to the end,” Bradford said. “We have Frankfort, Benzie and Kingsley to finish the season. That’s a nice way to end it.”

As for the boys, Ruelas challenged his team over the summer. The Lakers competed in tournaments at Benzie Central. Traverse City West, Ferris State and Grand Valley State.

“We wanted a challenge so we got put in the top brackets at Ferris and Grand Valley,” Ruelas said.

Glen Lake won its bracket at Grand Valley and was runner-up at Ferris State.

The Lakers return four starters in seniors Peterson and Nick Apsey, junior Xander Okerlund and sophomore Reece Hazelton. Okerlund averaged 17.5 points and 4.8 rebounds a year ago, while Peterson was at 15.1 points and 9.1 rebounds per contest.

“We have balance, inside and out, length and leadership,” Ruelas said.

Peterson, who has committed to play football at Grand Valley, is 6-5, as is Hazelton. Okerlund measures 6-4. 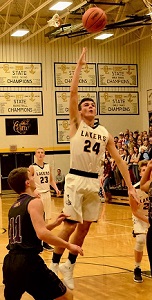 The Lakers also welcome back 5-7 senior point guard Peyton McDonough, who missed most of last season with a torn meniscus.

“We’re very athletic,” McDonough said. “We can run the floor. We have good shooters - we can drive and kick. We’re a well-rounded team.”

Glen Lake did not win the Northwest Conference last season. That honor went to Buckley, which ran the table. The Bears, who reached the Class D Final, return all five starters. Frankfort also has its top talent back.

“(Our players) know we have great teams in our conference,” Ruelas said. “We don’t throw that in their face. It’s motivation for us to work hard, do the right things and take it step by step.

“If we work together, work hard, have fun and are connected as a team, that’s my goal. I want us to get better every day.”

Connected was the word Ruelas chose at the retreat.

Peterson said chemistry is one of the Lakers’ strengths.

“Everyone’s really positive and excited for the challenge,” Okerlund added.

McDonough. Peterson and Okerlund are the captains, and all bring something different to the table.

“Peyton’s the vocal leader,” Ruelas said. “He’s challenging everybody to get better every day, even if it’s one percent. Cade brings that competitiveness to the team. He wants his senior class to go out the right way, not have any regrets. Xander leads by example. He works his tail off.”

Glen Lake opens its season Tuesday against St. Francis – the start of a near four-month journey.

“We’re not going to lose sight of the important things,” Ruelas said. “Of course, we want to win the conference, the District, and so on. Every good team wants that.

“But basketball is like every other sport. On any given night, maybe the ball doesn’t fall, things don’t go your way. (Our season) could end in the state championship game or in a District Final. Whenever it ends, we want to look back and say we worked hard, had fun, respected each other and enjoyed the journey. If we walk away knowing that, I can’t think of a reason we would have any regrets. That’s what matters.”