EAST LANSING – The final seconds of Friday night at the Breslin Center were about relief for Wyoming Godwin Heights senior Delaney Blaylock, after he led the Wolverines to their first MHSAA championship game berth.

Relief turned into disbelief Saturday – and satisfaction for a community that started this trip nearly 90 years ago.

Godwin Heights defeated Detroit Henry Ford 85-68 in the final game of this season to earn its first MHSAA title, 86 years after its first trip to the final week.

Grand Rapids Godwin made its first MHSAA Quarterfinal in 1929 and finished runner-up in 1950 and then as Wyoming Godwin in 1960. The Wolverines played in four more Semifinals – including in 2013 – and then fell in the Quarterfinals again in 2014.

Like Powers North Central did in winning Class D earlier Saturday, Godwin Heights (26-1) capped a three-year run that will go down among the most successful in MHSAA history.

The Wolverines were a combined 74-5 over the last three seasons, which tied them for the ninth-most wins over a period of that length.

And the last of those wins was more or less decided by halftime.

Henry Ford scored the first basket of the game and never led again, as Godwin Heights build a lead as large as 23 points during the second quarter while shooting 55 percent from the field and making 8 of 11 3-point shots during the first 16 minutes. 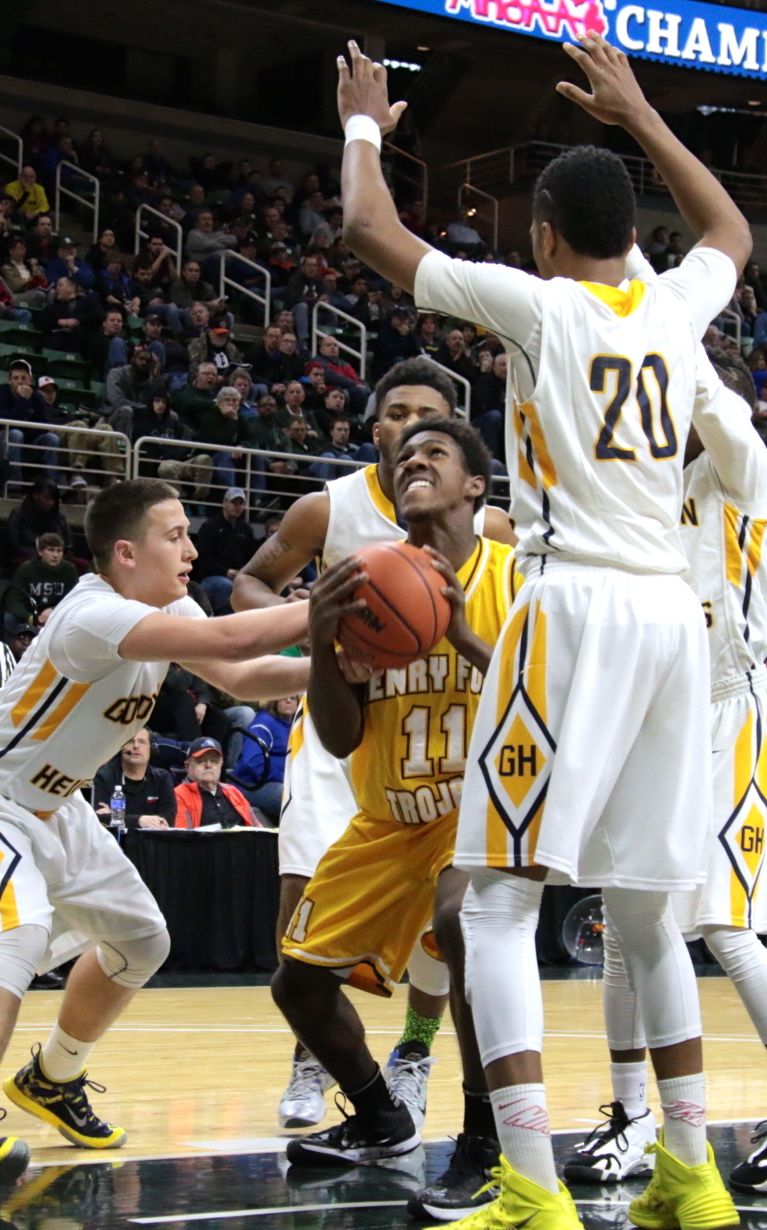 The Wolverines led 50-29 at the break and never by fewer than 14 points during the final two quarters.

“I don’t think I ever saw a team shoot like that in the Breslin,” Henry Ford coach Kenneth Flowers said. “The craziest part about it, they didn’t shoot the ball well yesterday (33 percent from the floor, 26 from 3-point range). They came out today on fire. … They played like state champions.”

The Godwin Heights basketball community had to struggle through sadness at the end of summer. Junior-to-be Ta’Carhri Richardson – who played for first-year Wolverines coach Tyler Whittemore on the junior varsity in 2013-14 – was shot and died Aug. 3.

Whittemore, a 2005 graduate, was promoted to the varsity job after coaching in the program at various levels for eight seasons.

“Toughness is what defines them,” Whittemore said of his players. “It’s tough to go through what they did, have that tragedy happen (during) the summer before the basketball season was going to start. We had one of our games on his birthday, the second game against Holland (on Dec. 16). The guys rallied around each other. They were playing hard for one another, getting loose balls for one another … not for themselves.”

Detroit Henry Ford, playing in its first Final after also playing in and winning its first Semifinal on Friday, finished 21-6.

Senior forward Joshua Davis had 16 points and 11 rebounds and junior point guard James Towns had 15 points and six assists. They were the leading scorers this season as the Trojans bounced back from two straight sub-.500 seasons to also make their first Quarterfinal since 1984.

“I was telling them I know it hurts, and they’re crying their eyes out right now too,” Flowers said. “But they took Henry Ford High School to a place it’s never been before. These guys are the foundation of good things to come.”