For many years, basketball was a letdown at Muskegon High School.

The Big Reds have been known for football ever since their first victory in 1895, racking up 806 more wins since then (most in the state), along with eight MHSAA championships – including recent titles in 2004, 2006 and 2008.

But as the snow slowly blanketed Hackley Stadium’s hallowed turf on an annual basis, Muskegon was never consistently able to transfer the energy, focus and success from the gridiron to the hardwood of Redmond-Potter Gymnasium.

That all changed in 2012, when nearby Muskegon Heights went through a period of upheaval, before eventually reconstituting itself as Muskegon Heights Public School Academy. During that time of uncertainty about the school’s athletic future, boys basketball coach Keith Guy made the move down Sanford Street to Muskegon High, and suddenly football was no longer the only show in town.

“I’ve always thought that there are enough great athletes and enough potential at city schools that they could be great in both football and basketball,” said Guy, who starts his fourth season as Muskegon’s basketball coach Friday night against visiting Rockford.

“I know we won’t ever be what the football program is here at Muskegon, but I feel like we now have a little identity of our own.”

Thrower, as his name suggests, was a star quarterback for Muskegon coach Shane Fairfield in the fall and the star point guard for Guy in the winter. Thrower is now a sophomore guard for Stony Brook, a Division I school in New York which narrowly missed qualifying for the NCAA Tournament last year.

Guy’s handling of Thrower’s situation, essentially staying out of the way while football season was still going on, set the tone for Big Reds football and basketball programs that continue to encourage each other and push each other higher. While basketball has elevated itself among the state’s elite programs, Muskegon football has kept pace, advancing to MHSAA championship games three straight years in 2012, 2013 and 2014.

Guy, 40, a former standout point guard at Muskegon Heights, Muskegon Community College and Ferris State University, explained that situation after basketball practice on Nov. 30, after quickly changing from his sweat suit into formal attire to help run that night’s end-of-year football banquet as the athletic director.

“When one succeeds, all of us succeed,” said Guy, whose son, Christian Martinez, was the star quarterback of Muskegon Catholic Central’s Division 8 football championship team this fall. “Shane has gone and filmed games for me on the east side of the state before, and he knows that he’s got my support during football season.” 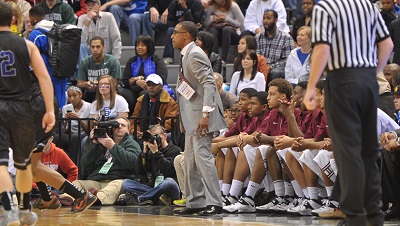 While this year’s Muskegon basketball team may lack the star power of the past two years, it hopes to make up for it with depth. At a recent practice, it was difficult to decipher the starting five from the reserves.

“Last year, we ran a lot more set plays with DD (Davis) in there,” said Michael Littlejohn, a 5-11 senior guard who is the lone returning starter off last year’s team, which was stopped a game short of returning to the Breslin Center by Lansing Everett in the Class A Quarterfinals. “This year, it’s going to be more running, more showtime.”

Littlejohn will start at point guard and will be joined in the backcourt by smooth-shooting senior Linwood Lee and defensive stopper Jacarius Scott. The leaders up front are versatile juniors Jermayne Golidy (6-3) and Anthony Bethea (6-5), along with senior Desi Stephens (6-4).

The Big Reds also will get a boost of muscle and toughness from a couple of college football prospects in senior Terrion Hill-McKay and junior Jacorey Sullivan.

Guy also has three sophomores – Chris Murry, Willie Shanks Jr. and Antwan Reed – on the varsity roster, along with freshman DeAndre Carter. Reed (6-7, 286 pounds), considered one of the nation’s top sophomore offensive tackles, is improving his conditioning and footwork for football and could develop into a basketball force as well.

Muskegon’s playing rotation and style of play will take shape during back-to-back blockbuster tournaments over holiday break, when Muskegon will be the focus of prep basketball interest statewide – and give Guy an indication of whether this year’s group has the makings of another 20-plus win team.

“I won’t ever shy away from playing the best,” said Guy, who is assisted on the varsity level by his brother and former Muskegon Heights teammate, Maurice Sain, along with Louis Murray and Josh Wall. “I would rather find out the truth about my players in December and January than in March.”

The truth will start to be told Dec. 29 and Dec. 30, when Muskegon takes on Detroit Consortium and East Kentwood on back-to-back nights at the Meijer Hall of Fame Classic at Reeths-Puffer High School, a tournament which also features Lansing Sexton and Grand Rapids Ottawa Hills.

The challenge then gets ratcheted up later that same week, when Illinois power Chicago Whitney Young comes to Redmond-Potter on Jan. 2 for the featured event in the three-game Muskegon Basketball Showcase.

“Our goal at Muskegon now is to win a state championship in football and basketball every year – it doesn’t always happen, obviously, but that’s always our goal,” explained Hill-McKay, who is a rare Class A three-sport athlete, playing baseball as well. “We’re not going to lower our expectations just because we don’t have a 7-footer.”

PHOTOS: (Top) Muskegon boys basketball coach Keith Guy, right, confers with Jordan Waire during the Class A Semifinal in 2014. (Middle) Guy works to get the attention of his players during the championship game win that season.