By pure coincidence, it happened to be Valentine's Day.

However, that date on the calendar served as the perfect backdrop when two schools and two officiating crews paired up for a "Coaches for Cancer" girls and boys basketball doubleheader Friday at Haslett High School.

Adding to the poignancy of this particular Feb. 14 were the still-raw emotions for the host school, which lost its longtime principal, Bart Wegenke, to pancreatic cancer a month earlier.

"This is our second year participating in a Coaches vs. Cancer event at a basketball game," said Haslett athletic director Darin Ferguson. "The event was actually planned before Bart’s passing."

Wegenke, 53, was widely recognized in educational circles for his excellence as an administrator, and also was an accomplished basketball official at the high school and collegiate levels, ascending to NCAA Division I status.

During a recent booster club meeting, there was discussion of the event, scheduled for the home doubleheader versus local rival Fowlerville. In attendance was Mike Conlin, whose son Jace is a member of the Haslett golf team. Conlin also assigns basketball officials for the Capital Area Activities Conference and is owner of Correct Call Officiating Outfitters, provider of licensed MHSAA officials apparel.

"They were displaying purple t-shirts that the teams would be wearing that night, and I thought, 'Why not have the officials join in that night?'" Conlin said. "Because of the situation with Bart and his positive influence and the respect given him by players, coaches and officials alike, we had patches created in his memory. So it seemed fitting to outfit the officials for this night with special shirts bearing Bart’s name."

Conlin and partner Joe DeRosa at Smitty Apparel had designed the commemorative patches for collegiate-style shirts that were worn in the Big Ten during a weekend shortly after Wegenke's passing. The shirts differ in style from MHSAA shirts; the area on the shoulder of the collegiate shirt provides greater visibility for the patch.

"I am not an advocate for high school officials wearing college shirts; that's not me," Conlin said. "But, in this case, we got to talking and thought the ragland sleeve would allow for a more prominent display. And, we wanted the shirts to be purple and white so that our crews that night could join in the cause."

Conlin contacted the MHSAA, and permission for the alternate gear – which also would include purple whistles – was granted. Following the games that night, Conlin collected the commemorative shirts to have them dry-cleaned. They were to be given to Bart's brother Brett, who will distribute them to family members.

There was another twist. When Conlin noticed who had been assigned – months before – to officiate the games that night, he decided that one more design would be needed. 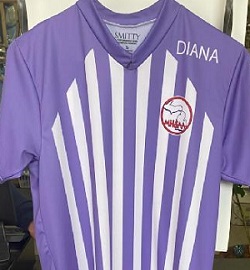 Working the girls game that night were Deb Traxinger, Rob Stanaway and Dennis Bickerstaff. The boys crew was Scott Barnes, Mike Maisner and Justin Terry. It was Terry's name that triggered additional response.

Terry lost his wife, Diana, last May 25 after a courageous fight with cancer.

"When I saw Justin as one of the officials for that night, it just made all the sense in the world to craft a special shirt for him with Diana's name on it since this hits so close to home," Conlin said. "We wanted something for him to take with him."

And Terry did just that, not only following the game, but for the game.

"I'm wearing that shirt for the game," Terry said the morning of the event. "Here it is, Valentine's Day, people exchanging cards, flowers, candy, and for the first time, I don't have that. But I'll be thinking about my honey when I take the floor, and she’ll be with me. My whole family will be there."

And he said he would be thinking of countless others enduring the same struggles his family experienced.

"My heart goes out to the Wegenke family. I know first-hand what it's like to lose the love of your life," Terry said. "I hope for this night to serve as a reminder that people need to be educated about cancer; about regular checkups and warning signs. Whether it's a spouse, child, uncle, aunt, these things creep into our lives and cause us to pause. Every one of us will be subjected to something similar someday. It's important to love hard and live life."

On a date signifying heart, there was plenty of adoration to go around.