Brent Crossman was 12 years old in 1982 when his mother, now Sonja Reithan, was diagnosed with breast cancer.

It was impossible for him to understand at that point all that she went through with chemotherapy and a mastectomy. Thankfully, she survived.

He was much older when his sister Kenna Crossman died in 1998 after battling a brain tumor.

Charlotte High School's “Hooping for a Cure” players vs. teachers basketball games began as a way to honor his mom and raise money for the American Cancer Society. But this month’s game, the fifth in what is now an annual event, hit home again for the Orioles community.

On Jan. 2, Tina Droscha – whose son Adam is the senior class president – died after a 14-year battle against breast cancer. Then, on Feb. 4, former standout athlete Blake Rankin (class of 2011) died after fighting mouth cancer. 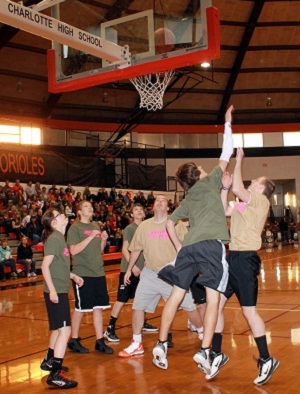 “I tell people, I wish I was one of these guys who just picked this cause and decided to be passionate about it. But it picked me,” said Crossman, who was the girls varsity coach from 1998-2007 and also has coached baseball and golf at the school. “When I lost my sister in 1998, it changed my life. I watched her go from a wonderful, healthy person with no issues to bed-ridden and I’m-carrying-her-to-the-bathroom kind of stuff.

“It got me all fired up. I was passionate and gung-ho about it. And when I started coaching basketball and became a teacher here, I was active and involved anyway and I knew I had avenues others didn’t have.”

It is set up with the usual four quarters – but with freshmen playing the first, sophomores the second, juniors the third and seniors the fourth. Each grade has 15 players made up of both boys and girls. They take on a team of teachers and staff that also rotates in and out of the line-up.

The first game raised roughly $2,000. That donation doubled the next year.

This year, Crossman’s crew sold more than 900 “Hunt for a Cure” shirts in honor of Rankin, a passionate outdoorsman (and the teams also wore them for the game). Balls autographed by Michigan State coaches Tom Izzo, Suzy Merchant and Mark Dantonio were raffled, and spectators also were treated to performances by local and school dancers and the Orioles’ drum line. Droscha and his band Smash the Hall played after the game.