Drew and Jake Southland now have to help their struggling father onto the basketball court at Mona Shores.

But they know it wasn’t too long ago that Scot Southland was carrying the load for the Sailors’ basketball program.

“People tell me all the time about how good he was,” Drew Southland said of his father, the all-time leading scorer in Mona Shores basketball history with 1,113 career points, who is now battling an even tougher opponent in multiple sclerosis.

“I try to live up to it. He is such an inspiration, with his positive attitude. I try not to complain about anything in my life, that’s for sure.”

Drew, a 6-foot-1 senior, and his team are having a difficult season so far, losing eight in a row before bolting out to a 38-6 halftime lead Tuesday and then cruising to a 64-41 win over visiting Grand Rapids Union. Drew scored a game-high 20 points for the Sailors (2-8).

Jake, a sophomore who is the same height as his brother at 6-1, is the leading scorer and rebounder for the Shores junior varsity, which evened its record at 5-5 on Tuesday, also with a win over GR Union. He scored a season-high 35 points in a loss against Whitehall on Feb. 20.

Win or lose, the Southland boys are always there for their dad, who turned 50 in January. Scot made first-team all-conference in the Ottawa-Kent Conference Red as both a junior and senior, graduating in 1989. He was also a two-time Muskegon Chronicle All-Area selection and averaged better than 20 points per game his senior year.

The first signs of his MS showed up during college, but the symptoms of the progressive nerve disease have become more pronounced in recent years, preventing him from working and even walking on his own. Drew and Jake are always there to help him in and out of his wheelchair and into the family’s van.

“I don’t mind it one bit,” said Jake. “I know he would be taking care of me if it was the other way around. My dad is so good to me and so supportive in everything, so helping him around is really the least I can do.”

The Southland family is a fixture at all of Mona Shores’ home games.

Scot is always there at the end of the bleachers on the baseline, with his high school sweetheart and wife, Steffanie, close by his side. Other regulars, when tickets are available with COVID-19 restrictions, are his daughter Mason, his mother Joanne Southland and his mother-in-law Mary Golin. 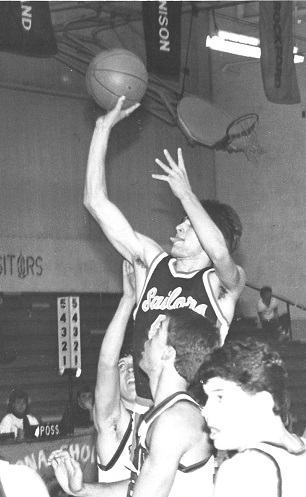 Joanne has been going to games at Mona Shores for years as her three boys – Ted, Kip and Scot – worked their way through the system. Kip was a standout basketball player, but his best sport was baseball, as he went on to start at shortstop for Central Michigan University during the mid-1980s and later played in the San Francisco Giants farm system.

Scot started some varsity football games at quarterback, but of the three Southland boys, he was the one who left the biggest mark on the hardcourt.

He was a three-year varsity starter at a time when sophomores rarely started on the varsity, especially at a Class A school. As a junior, he led the Sailors to 13 wins and a rare District championship. As a senior, he became the first Mona Shores basketball player to score 1,000 points – a milestone that the humble, quiet standout wasn’t even cognizant of until after the fact.

“He is out there to set the best example he can,” then-Mona Shores coach John Adams told The Muskegon Chronicle in 1989 about Scot, his senior captain. “He is the All-American, apple pie kid. He’s the perfect role model for the program.”

The strong athletic genes run deep in the family, tracing back to Scot’s maternal grandfather Pete Petroskey, a welterweight boxer who won more than 180 professional fights. Petroskey went on to train some of the best boxers to ever come out of Muskegon, including Kenny Lane and Phil Baldwin, and was inducted into the Muskegon Area Sports Hall of Fame in 2002.

Scot’s athletic achievements continued after high school, as he led the Muskegon Community College basketball team to a runner-up finish at the junior college national tournament in 1990. He later walked on to the University of Arizona football team and made the roster as a backup quarterback.

Scot did some coaching when his kids were younger, but his disease has prevented him from coaching in recent years. He is now the No. 1 fan and encourager for Drew and Jake, as well as Mason, who is having a good year for the Mona Shores eighth-grade girls basketball team.

“The Southland family is very special to Mona Shores basketball,” explained Mona Shores varsity coach Brad Kurth, who missed two games after the death of his mother but returned to guide the Sailors to victory Tuesday night. “Drew and Jake are everything that you can ask for as a coach. They just compete. They go out and give you everything that they have.”

The Mona Shores athletic program has changed drastically since the late 1980s when Scot Southland was leading the Sailors in football and basketball.

Back then, the Sailors struggled to win any games on the football field, but were highly competitive with the likes of Muskegon and Grand Haven in basketball. Now, the Sailors rarely lose a football game and basketball has been looking up at those aforementioned programs over the past 10 years.

Perhaps no single player has been more affected by the unsettled basketball program as Drew, who has had a different varsity head coach in each of his four years at the high school – as the program has had six head coaches over the past eight years.

“It’s been hard with the different coaches, but I hate making excuses,” said Drew, one of just four seniors on the Shores roster. “We can play much better than we have.”

Through it all, Drew has worked tirelessly to improve his game, waking up early to come in and shoot almost every morning, and still hopes to play college basketball.

Jake, who plays wide receiver and defensive back for the Shores football team and was moved up to the varsity for the team’s recent Division 2 championship run, hopes to be part of a basketball resurgence at Shores over the next two years.

The Sailors have plenty of height and youth on their front line in juniors Donovan Russell (6-8) and Ethan Krueger (6-6) and sophomore Parker Swartz (6-4). With Jake and many other talented players set to move up to the varsity full-time next year, he is hoping to engineer a basketball breakthrough – much like his father did during his junior year of high school.

Jake turned some heads when he got moved up to the varsity for Saturday’s game against Wyoming. In less than two minutes of action, he scored five points and grabbed two rebounds.

“Drew and Jake just love to be out on the basketball court,” said Mona Shores junior varsity coach Tyler VanBergen. “The love that their dad has for the game flows through the whole family.”

Love for the game of basketball, along with humility and a strong work ethic, are not the only gifts Scot has given to his children.

Watching their father handle his illness with grace and a positive attitude – while never wallowing in self-pity or taking his frustrations out on them – has given all three of them a perspective on life which most kids their age simply don’t have.

“I’ve learned from watching him that life isn’t fair,” Jake said. “I mean, I would love to be able to play 1-on-1 against him, but instead we have to do other things. We watch a lot of movies together and talk about them. Doing that with him has really given me a passion for movies, and I’d love to work in film or directing someday.”

PHOTOS: (Top) Muskegon Mona Shores’ Drew Southland works to get up a shot during a game against Muskegon last season. (Middle) Scot Southland was a standout for Mona Shores before graduating in 1989. (Below) Scot, as a member of the Sailors, and younger son Jake who is playing this season on junior varsity. (Top photo courtesy of Local Sports Journal; additional photos courtesy of Southland family.)