ESCANABA – Dwight D. Eisenhower was president of the United States when Chassell High School established a record that has spanned 10 presidencies.

Now another Upper Peninsula school, Powers North Central, is poised to surpass that cherished standard, just a week into the term of a new president, Donald Trump.

Chassell reeled off 65 straight victories from Feb. 1, 1956, to Nov. 23, 1958. North Central (9-0) has 64 consecutive wins, a streak that began Dec. 8, 2014. The Jets will try to equal the record Tuesday when they host Rock Mid Peninsula, then the record-setter would come Friday when they host neighboring Bark River-Harris (9-1) in a game that will be broadcast live on MHSAA.tv.

Chassell was the first U.P. school to bring an MHSAA championship trophy across the Mackinac Bridge, in 1958, shortly after it opened to traffic.

North Central coach Adam Mercier said the Jets first looked at the Chassell record after winning a second straight Class D title March 26, 2016. “We wondered if we would be able to do it,” Mercier said a day before making Big Bay de Noc victim No. 64. “It is rewarding to be named coach of such an historic team. I feel privileged to have coached these kids.”

The basketball team’s success has been shared by the school’s football team, which has won two consecutive 8-player MHSAA championships with 27 straight victories overall. With several students on both teams, that means those boys have won 91 straight games during the fall and winter seasons.

Mercier said the Jets have not spent a lot of time talking about Chassell’s record. “The last week or two we’ve talked about the distraction part of it,” he said, indicating people have been talking about it and the coaches wanted the players to respond appropriately.

Former Jets’ skipper Bob Whitens, who coached the team to the 1984 Class D title, spoke to the players recently. Mercier said his message was when you go to practice an athlete does one of two things: Get better or get worse. “He asked the players to think about that on a daily basis,” Mercier said of emphasizing daily improvement.

“It is something historic. You don’t want to diminish its historic value by not talking about it,” said Mercier, adding “we have always been week-to-week about our goals.”

Their first goal is winning a third straight Class D championship, but the postseason does not begin until March 6. So the immediate focus can now turn to Chassell’s record. “We are trying mentally and physically to prepare for that moment. This week was the first time we tried to prepare for that night. We are ramping it up as District week, treating the next three games as the next three games in the District.”

North Central has not really been challenged this season, with a 70-59 victory at Class B Menominee the closest game. Menominee also provided the biggest challenge last season, falling 64-60 at home when Jason Whitens snapped a 60-60 tie with a layup and free throw with seven seconds left for the Jets’ 40th straight win.

Chassell also had a few escapes during its record run, none bigger than in the 1956 Class D championship game when the Panthers trailed by 15 points with 3:20 left. With a stifling full-court press, Chassell scored the final 18 points to beat Portland St. Patrick 71-68.  (U.P. schools Stephenson and Crystal Falls also won MHSAA titles that day). 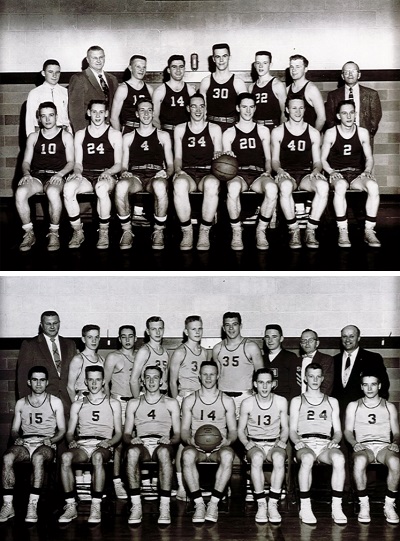 “They didn’t get the ball past half-court,” recalled Don Mattson of Ishpeming, one of three surviving members of that first title team. “Jenison Field House was going nuts.”

Mattson said coach Ed Helakoski picked up the diamond press from coach John Gaffney of Houghton, who used it to help the Gremlins win the 1955 Class C title. “We played a man-to-man zone. They call it a match-up zone now,” said Mattson. “We practiced it every day. Everyone knew their assignments.”

The Panthers repeated as champs in 1957 and managed to extend their win streak by edging L’Anse 64-63 and erasing an 18-2 deficit to upend Negaunee St. Paul.

“The 1957 team was our best team,” said Mattson, the only player to start all 65 games during the streak. “We had size and experience. We were good.”

In 1958, the escape act came against Doelle High School, in a game moved from Tapiola to Houghton High School to accommodate the large crowd. “Doelle was our big rival,” Mattson said. “We were two points down when the horn went off. Bobby Belhumer, the fastest kid in school, was fouled (at mid-court) when a Doelle player reached in as the horn goes off. He never made two free throws in his life and he had a 1-and-1.

“We all thought we were done. The first shot was real flat, herky-jerky (shooting) motion. It hit the front of the rim, skidded across and hit the back of the rim, bounced up and hit the top of the backboard and fell right through the hole. The basketball gods were smiling on us. The second one he just nailed, we got to overtime (60-60) and we won 72-66.”

“Fifty-nine years ago. Guys always throw that at me,” Mattson said. “It doesn’t bother me one bit. We must have done something good. It was a number. That is all it was. That is pretty much the way I’ve looked at it for 59 years.”

Unlike the NFL’s Miami Dolphins, who share a toast once the season’s last unbeaten team loses, Mattson is cheering for the Jets.

“I just hope the Jets can break the record. I’m glad to see a U.P. team go break it,” he said. “Let’s keep it on this side of the (Mackinac) bridge. It is just a matter of the right time, the right place, the conditions and the players. Records are just a number.”

The only other survivors from those teams are Belhumer, who lives near Milwaukee, and Paul Makela, who lives in California. The trio joined the U.S. Navy together, after Mattson spent a year playing at Northern Michigan University.

The players were not aware they set a state record, with Mattson recalling that Helakoski told them not to read the paper or believe what was written and that he would save the papers and distribute them after the season. 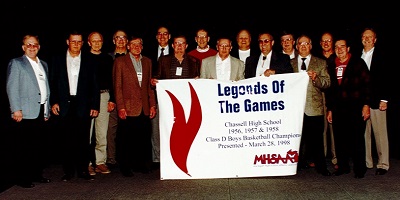 They followed the same approach used by the Jets, playing one game at a time, going day-by-day. “I give Helakoski credit for keeping us on a low keel,” said Mattson. “We never thought we were better than anybody. We just kept level-headed. We didn’t realize what we did until we were out of school.”

Mattson, whose son Troy is the women’s basketball coach at NMU, said the game has changed drastically since he was a two-time all-state selection.

“We had small gyms; there was no roll-dribble. The hand was on top of the ball or else it was (called) a carry. Our game was passing, put the ball on the floor a couple of times, go up and shoot or pass the ball,” he said.

He has seen the Jets play but doesn’t plan to attend the potential record-breaker. “I’ll see them in the Regional (at Negaunee),” he said. “Another thought crossed my mind. North Central is going to win another state championship. I’m confident of that. If they do, they will have about 80 wins in a row.”

The Jets have tried to keep the record chase low key, but Mercier said that approach is changing as the record bid approaches.

“Our players, now they see it is there within reach. They really want it,” he said, noting they appreciate the importance of U.P. basketball. “We don’t want to downplay it by any means. As we get closer they are expecting to reach that goal, and they know the hard work it has taken to reach it.”