EAST LANSING – Seth Polfus might still be giggling and shaking his head. He couldn’t believe it either.

Southfield Christian was going to be the greatest threat so far to Powers North Central’s nation-leading 81-game winning streak. Anyone closely following the Jets’ record-setting run knew it.

But no one would’ve guessed Polfus – a 5-foot-9 senior guard, the team’s fifth-leading scorer, coming off three missed jumpers – would be the one to finish victory 82.

With four seconds to play in Thursday’s first Class D Semifinal, the team’s Mr. Basketball finalist double covered, and history seemingly hanging in the Breslin Center air, North Central’s Dawson Bilski sent a halfcourt pass deep to Polfus, who bobbled the ball at the baseline. Recovering, he somehow got up a shot around outstretched arms with one tenth of a second on the clock – and it dropped to give the Jets an 84-83 double overtime victory that could well be remembered as the game of this Finals weekend, even though no title was awarded for winning it.

Regardless, it surely will be remembered as the defining game of North Central’s winning streak, however long it lasts. Southfield Christian won three straight Class D titles from 2012-14, and then played in Class C the last two seasons while the Jets built their legacy. After last season’s Finals, this school year’s classifications were released showing the Eagles headed back to Class D.

“We knew if we made it to this point, they’d be there,” said Jets senior Jason Whitens, that Mr. Basketball finalist. “So everything from that point was getting better each day, preparing for that but not overlooking any opponent because you never know when something’s going to slip up, and teams are after you. We’ve got a big target on our back, and we got the job done.”

Polfus will have a busy weekend. A 4.0 student, he’ll later that afternoon accept one of 32 MHSAA/Farm Bureau Insurance Scholar-Athlete Awards for his achievements as an all-around athlete and student.

But he wrote his legend with that most improbable shot, the basket of a lifetime for a player who tore a knee ligament two seasons ago and spent last year’s Breslin run mostly holding down the bench.

“I didn’t know how much time was on the clock. I didn’t even know I shot it,” Polfus said. “We set up that play and Dawson was going to be coming down the court, and I knew I was going to be in that position because they were going to go double (Whitens down the sideline), and the ball was coming and I was ‘Oh man, it’s actually coming at me right now.’ And then I lost (the ball) … and I didn’t really know where I was. And then I saw the 6-4 kid coming at me, pump-faked him like I always do when I’m really scared. And then just launched it, and I saw it hit off the rim, thought it was an air ball, and then I just didn’t know what happened.” 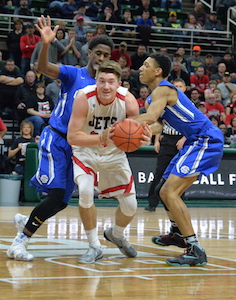 “I saw him go wide open,” Bilski added, “and I have enough trust in Seth – I grew up with him – I knew he was going to get the job done.”

Needless to say, none of what happened past halfcourt was coach Adam Mercier’s plan.

The Jets had to make a few. Southfield Christian led by 10 with two minutes to go in the third quarter, only to see the Jets tie it back up with a 14-4 run to end the period.

The two teams went back and fourth during the fourth, with the Eagles pushing the game to overtime on sophomore Harlond Beverly’s free throw with six seconds to go in regulation.

Southfield Christian got up by three at the end of the first overtime, but Whitens drained a 3-pointer with 17 seconds left to push the game to a second extra period. As that one wound down, the Jets led 82-80 with 20 seconds to go after a Bilski blocked shot and free throw.

But Eagles senior Brock Washington fearlessly drilled a 3-pointer with 10 seconds to play, pushing his team ahead by one and setting up Polfus’ dramatic moment.

Four other Jets average at least 10 points a game, and Polfus finished fifth in the points column again with seven (just above his 5.5 ppg average). Whitens had 31 points and 10 rebounds, Bilski added 23 points and 12 boards, and senior Bobby Kleiman had 14 points and eight rebounds. Polfus was the only starter who didn’t play the full 40 minutes, sitting for a mere three.

“I think win or lose tonight, they guys have already built their legacy. They didn’t need to win this game to prove anything,” Mercier said. “I’m just so happy for our guys to overcome. I know a lot of people have doubts about us, and deservedly so. We’re a small Class D school with 115 kids, so a lot of people discredit our 81-game winning streak up to this point, because who have you beat?

“That was a question mark coming in. So these kids played the underdog role. At the same time, we’re the two-time defending state champs, we’ve won that many games in a row and we deserve to be here as well. I was just so elated at pushback by our kids tonight … just that pushback, because how many games did we have single digits (during this streak)? So how are our kids going to respond? Those were the questions coming in. And these kids answered them tonight.”