ONSTED – When Mary Kay LaFerney moved from California to Michigan, she had no idea the impact a group of freshmen and sophomore boys were going to have on her son.

And she certainly didn’t know it would be because of basketball.

But that’s what happened this past season for LaFerney and her son, Zachary Johnston, at Onsted High School in Lenawee County. Johnston, 15, who has Down syndrome, wanted to be part of the junior varsity basketball team. The JV head coach Travis Wobrock was on board with the idea.

“He came to every practice and every game,” Wobrock said.

Johnston didn’t mind filling water bottles, grabbing towels or throwing out basketballs. He would also often take part in layup lines at the start of practice and shoot baskets when he could. It didn’t take long before Johnston made a request.

“He said he wanted a jersey,” Wobrock said.

The Onsted junior varsity team members had bigger ideas for Johnston. They wanted him to play in a game.

“Every week, one of the kids on the team would come to me and ask when Zach was going to get his chance,” Wobrock said. “They wanted this to happen so bad.”

As the season drew closer to the finish, Wobrock put the plan in motion. He contacted Clinton junior varsity basketball coach Greg Dutton and told him about Zachary. Dutton was instantly in favor of helping Johnston get into the action.

“When I played at Napoleon, we had a team manager, Alex DeNato, who had Down syndrome,” Dutton said. “He never had the opportunity to get a basket in one of our games, but he would lead us in pre-game speeches and occasionally led us out of the locker room for pre-game warmups.”

The Onsted players decided to wrap Zachary’s jersey up and present it to him a couple of days before the game vs. Clinton. 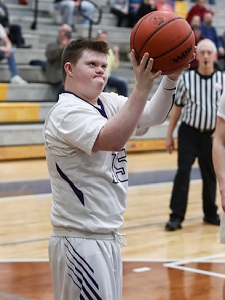 “He got into the car, and he was smiling,” LaFerney said. “He was carrying a bag. I asked him what was in the bag. He said, ‘Take a peek.’ He was so excited to have a jersey.”

Wobrock videotaped the moment Johnston opened his jersey and posted it on social media. Thousands of people viewed it and read about plans for Johnston to play in the game. As the JV game went on, the stands began to fill up. Some held signs for Zachary. Fans were chanting his name.

“It was the biggest crowd we’ve ever had for a JV game,” said Wobrock.

The players on the floor kept looking over at the bench to see if Johnston was ready. Finally, late in the game, Wobrock walked with Johnston to the scorer’s table. Johnston showed the scorekeeper his jersey – number 15 – checked into the game, and ran onto the court.

“When the crowd erupted, it gave me chills,” Wobrock said. “I’ve never seen anything like that. All the kids stood up. Everyone stood up. We weren’t even focused on basketball that night. We were focused on Zach.”

As players from both teams circled around Johnston, he got his chance. Finally, on a pass from Clinton’s Derek Tomalak, Johnston took aim at the basket and sank the jump shot.

The crowd erupted. Several people were in tears.

“I can’t remember being that emotional before the varsity game even started,” Onsted varsity basketball coach Brad Maska said. “I’m proud of my JV coaches for how they handled that night.”

Dutton said he was more than happy to help the Onsted basketball team make the moment happen. He was also glad his children got to watch from the stands.

“It was a special thing to be a part of and witness,” he said. “I am happy Travis asked our team to be involved. It helps bring into the limelight that basketball is just a game and that there are greater things in life than wins and losses. It's about building young men to be caring, thoughtful individuals when they are done playing.”

Wobrock, who is the graduation coach at Onsted High School, said his eight-player squad learned a lot of valuable lessons this season with Johnston as their manager. The players - Daniel Harrah, Jordan Santimore, Brody Giroux, Zack Gillean, Bradlee Vanbrunt, Harrison Moore, Matt Marsh and Brandon Corder – were just as emotional as everyone else in the Onsted gym.

“They’ve been amazing through this whole thing,” Wobrock said. “I’m very proud of them. 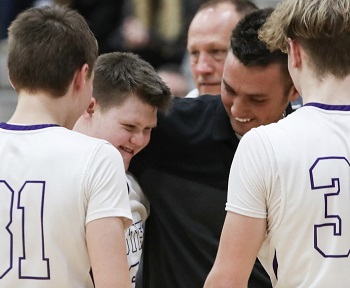 “It’s amazing how they have taken him under their wing. They give him fist-bumps in the hall and hugs. They eat lunch with him. I think that’s kind of how it started. They saw him eating alone at lunch and the whole table invited him to their table. The relationship has just taken off. He’s one of the guys.”

LaFerney is a California native and lived in the San Diego area until two years ago when her family moved to Michigan, where her husband was originally from and has family. They bought a home in the Onsted Community Schools district. It’s been a perfect fit for her son, who is a freshman at the school.

Being part of the school, part of the team, has been extremely important to Zachary, she said. “He’s a smart kid. He’s very aware of his situation and surroundings. He knows how people are treating him.

“This is about way more than just basketball,” she added. “It’s about inclusion. Coach Wobrock was amazing about making sure Zachary was included in every way possible. The players on that team really care for Zachary.”

Wobrock recognized the impact basketball has had on Johnston – and the other players on the Wildcats team.

“Just because someone is different,” Wobrock said, “it doesn’t mean they don’t have the same goals, the same dreams, as everyone else.”