Who let the dogs out?

Who, who — let the Mesick Bulldogs — in?

And, it’s more like a what … with the answer being the league’s expansion to 10 schools for the 2018-19 school year that paved the way for Mesick to enter.

The last two years in the Northwest also were the first two for the boys varsity under head coach Kyle Duby. The move may have helped turn things around for Mesick, along with extensive offseason work and youth development efforts.

The Mesick boys won five games in 2018-19 and six in 2019-2020 before going 11-6 last year and capturing a share of the West Michigan D championship – Mesick’s first piece of a conference basketball championship in 39 years.

Today, they Bulldogs are 7-0 and in the driver’s seat in league play. They have wins over league opponents Big Rapids Crossroads, Bear Lake, Brethren, Mason County Eastern, Walkerville and Baldwin.

The boys, with an outright conference championship on their minds, will finish their first run through the league schedule against Marion next week. Marion came into the West Michigan D at the same time as Mesick.

“This year we knew we wanted to win the conference outright,” said Duby, who also serves as the school’s athletic director. “That’s one of our goals.

“We also have a goal to make a run – whatever that may look like – in the postseason,” he continued.  “First and foremost, we wanted to win our conference outright.” 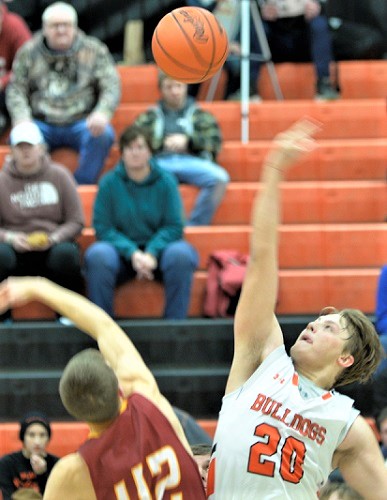 Keeping their starters healthy and able to play has been a challenge for the Bulldogs, but scoring has not. Injuries and COVID-related absences have caused Duby to alter his starting lineup regularly as the Bulldogs are hitting 70 points-plus per game.

Senior forward Conner Simmer is the team’s leading scorer, averaging 18. Another senior, Logan Wienclaw, chips in 12 from his center spot, while juniors Carter Simmer and Caleb Linna contribute 11.5 and 10 points per game, respectively.

“We have several kids who have worked hard for several years,” Duby said. “There is no one person you can shut down and expect to beat us.”

The Bulldogs, who also get almost eight points per game from junior Ashton Simerson, rack up 17 assists per games. Three-point shooting is also a strength. The Bulldogs got into the Michigan record books with 15 3-pointers on 32 tries in Thursday’s 73-45 win over Baldwin.

The Baldwin win helped erase memories of a big loss last year. Things are different as Mesick in nearing the halfway point of this home-and-home conference schedule. The Bulldogs have played the majority of their league games on the road and will be playing host a lot while enjoying their ride in the driver’s seat.

“Baldwin was the team that stopped us from an outright conference championship last year,” Duby said. “Winning in Baldwin and getting through the mental hurdle is exciting for us.”

High scoring has been a major contributor to the Bulldogs’ success to date, along with many of the current varsity having played together since middle school – the same time Duby took over the program.

Film study is another significant factor. Based on the review, the Bulldogs prepare to use a variety of presses and half court defenses from their repertoire.

“We have eight different defenses we can play depending on what the film said,” Duby pointed out.  “We do what the films tells us.”

“Luckily I have had these boys since they were in sixth and seventh grade, and we played a lot of summer basketball,” he continued. “They are a high-IQ group.”

The road to success started years ago with a meeting Duby held with the parents of today’s Bulldogs.

“I knew the task of getting to this point was going to be a long one,” Duby said. “Right away, we started having them travel.

“We’d take a junior high, JV and varsity team and go down to Muskegon, Grand Rapids, Lansing … Flint and be downstate in summer about four weekends,” he continued. “We would take our whole program together and caravan and play basketball.”

“My JV coach, Joe Lewis, has been with me since day one,” Duby said. “Over the years we’ve absorbed some dads to the staff.”