By Mike Spencer
Special for Second Half

MAPLE CITY – With the dawn this winter of the 2020s, Don Miller is coaching high school basketball in a seventh decade.

That’s rarefied air in Michigan High School Athletic Association circles, but it’s an atmosphere the 73-year-old longtime Maple City Glen Lake basketball coach has enjoyed and plans to continue as long as his health, family and Laker nation lets him.

“I have a passion for the bouncing of balls in a gym,” said Miller, who made his coaching debut at Howell in 1969 but then spent five decades guiding the Lakers’ ship. “The worst headache I may have disappears with that sound as I walk into a gym. The blood pressure goes down and the pleasure goes up – practices or games.”

Miller, admittedly the last man on his varsity basketball team at Southfield High during his playing days, coached a lot of good teams and players at Glen Lake during his varsity tenure (1973-2004) when he posted a 523-210 record.

“I didn’t have a lot of basketball skill, but I was a basketball junkie who got the bug to coach and I got better over the years,” Miller said. “I never scored a basket over the years, but I had a lot of players who made me look good. The kids loved the game and had the passion, and we had a spinning wheel of success breeding success.”

A Michigan State University grad, Miller enjoyed watching the Spartans practice after classes, although he never could have forecasted he’d become a Basketball Coaches Association of Michigan (BCAM) Hall of Famer in 1998 or enjoy decades of leading drills.

“Basketball is all about great chemistry, and being with young people sharing a game we love is just wonderful,” Miller said. “And to be able to do it this long is a gift, not a job. I am truly blessed to be in a gym for three hours a day.”

Today, there’s just a handful of active MHSAA coaches with Miller’s experience. Ironically, one of them is Beaverton’s Roy Johnston. Miller was an assistant of Johnston’s back in the early 1970s. 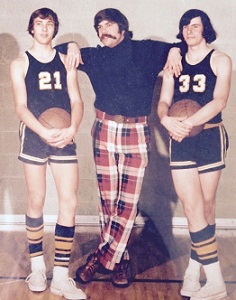 “I’m shocked to see Don still coaching,” said Cody Inglis, a former Suttons Bay athletic director/coach who worked Miller’s camps for a decade and went on to serve as athletic director at Traverse City Central and currently as an MHSAA assistant director. “But it shows that if there’s something you are good at, and something that you are passionate about, that you are never too old to do it.

“Don’s been a wonderful role model for coaching, perseverance and doing it the right way.”

Former player Todd Ciolek, who also has had a child play for Miller, concurred.

“It’s pretty amazing,” Ciolek said of Miller’s tenure. “But when you have a love for something, it makes it easy to do. For him, he’s got a love for this and I think it comes naturally.”

Miller guided the Lakers boys team to the Class D title in 1977 and runner-up finish in 1996. His teams also reached the MHSAA Semifinals twice. His teams won six Regionals, 16 Districts and 14 conference titles.

He stepped down as Glen Lake’s main man after the 2004 season due to health issues, needing a pacemaker and a stent. He continued running his summer basketball camps and became a volunteer assistant coach for former all-state player Todd Hazelton in 2007.

When Rich Ruelas became head coach in 2015, he asked Miller to be his junior varsity coach. Miller did that for three seasons and is now an assistant varsity coach.

“I was reborn!” Miller said. “I don’t eat and sleep basketball like I used to, but I love my three hours each day with these young men who share this common passion. It’s been a lifesaver.

“My role is advisor and listener,” he added. “But watching Rich, he’s me 30 years ago. I love feeding off his intensity.”

“I truly enjoy having Coach Miller as part of the program that he helped build,” Ruelas said. “There is nothing he hasn't gone through as a coach, and I have relied on him for advice over the past five years.

“He just knows the game so well and has made such an impact on the lives of his former players and campers with his ability to teach life lessons through basketball. We are lucky to have a Hall of Fame coach as part of our program, and I don't take it for granted.”

Ruelas and Miller, a retired educator, not only get together three hours in a gym daily, they routinely have “Mornings with Miller,” on the phone as Ruelas makes his 30-minute commute to school.

Ruelas said Miller has already given him some memorable moments – the unbeaten junior varsity team in 2018 that Miller coached, assistance with the Lakers’ 2018 Finals run (Glen Lake finished Class C runner-up) and an opportunity to meet MSU coach Tom Izzo. 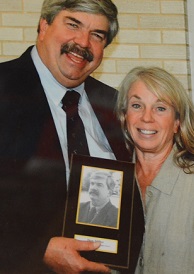 “What sticks out to me most is that we cannot go anywhere in the state without Don running into a former camper or player,” Ruelas said. “He has made such a lasting impact on so many, and it is evident in his relationships with his former players over the past seven decades.

“I'm not sure how long he will continue to be on the bench with me, but I know he still has a lot of fire in his belly. As long as he has permission from his wife and is able, I expect him to be there.”

One of Miller’s trademarks is teaching life lessons first and basketball second.

“Don was a unique coach,” Ciolek said. “He wasn’t a coach of basketball first; he was a coach of ethics and morals and basketball came second.

“Most coaches start with some technique, but he started with the word respect and then engrained in us that there was more beyond basketball. He instilled a set of values in us that ultimately led to victories.”

While Miller has had decades of success, some of the losses were devastating.

“You remember the losses more than the wins, and three last-second losses are forever etched in my brain,” said Miller noting a 1978 loss to Mio and Jay Smith in the Regional Final at Gaylord, a buzzer-beating in 1988 by eventual Class D champ Northport and the 1996 Semifinal loss to Wyoming Tri-unity Christian. “The pain and tears and disappointment of these three were great memories. But losses are part of the game and the boys, now men on those teams, have made me very proud ever since.”

Miller said he’s seen a lot of things change for the better since he started coaching. Players are starting younger and getting better coaching earlier, and that has led to improved talent and team play. There are also nicer gyms and uniforms, and Miller loves the idea of boys sharing the spotlight with girls programs.

His disdains, however, are that larger schools today have kids who tend to specialize in one sport earlier, and the crowd of negative parents is growing.

“Our kids play several sports, and I feel it makes them better,” Miller said. “Playing for other coaches in other sports increases competitiveness and team play. You learn to be a different role player, and that carries over into life. “

Miller said credit for his decades of success goes to his supportive wife, Sandy, and the blind luck of having Paul Christiansen as his first junior varsity coach.

“Paul was my organizer, critic, conscience and cohort for three decades,” Miller said. “He is a Hall of Fame track coach but the real wind beneath my wings. None of this happens without Paul.” 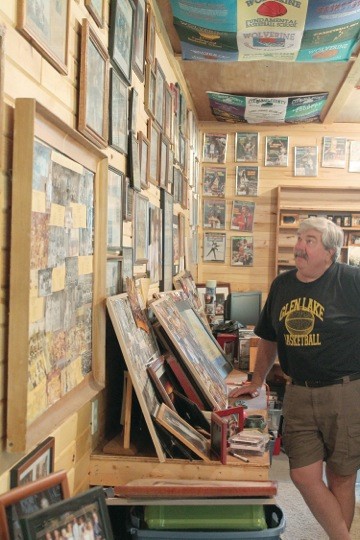 Miller also credits a number of coaching mentors including the late Larry Glass, a former Big Ten men’s coach and girls basketball coach at Leland, and great players and coaches he recruited to help at his summer camps in Wolverine and Glen Lake.

While Miller savors the friendships with other coaches, he’ll forever cherish his former players, who reciprocated their love by building him a man cave and basketball museum after he retired in 2004 and show up for weekly games of basketball at the Glen Arbor Town Hall – a 40-year-old tradition – with fellowship afterward.

“They call, email and treat me to meals out which really is too bad for my figure but great for my ego and friendships,” Miller admitted. “I love my boys (now men) and for that, I am truly the luckiest.”

“I was fortunate enough to be coached by Don when he was just starting out at Howell,” said Tom Murray, former Bay City John Glenn and Standish-Sterling Central coach. “He changed my life and many of my classmate’s lives.

“Don’s touched so many lives, it’s incredible. He instilled a lifelong love of basketball in me. He is a fantastic coach and man.”

Mike Spencer is a former MHSAA referee and sportswriter for the Bay City Times, Midland Daily News and Leelanau Enterprise and freelancer for both the Enterprise and the Traverse City Record Eagle.

1960s – Last man on the Southfield High team. Watching MSU practice after class without a clue that he would coach someday. Getting hired in 1969 as the freshman coach at Howell because no else wanted the job and coaching Morey Ray, his first great player.

1970s – Coaching the 1977 Class D championship season and the slow evolution over the years of the front line of seniors Dave Prentice, Geof Kotila and Rick Baillergeon, who started for three years. Being down three points, without the ball and 30 seconds to go, and winning the Final by two on a shot with one second left against the No. 1-ranked team in the state, Detroit East Catholic, 70-68. 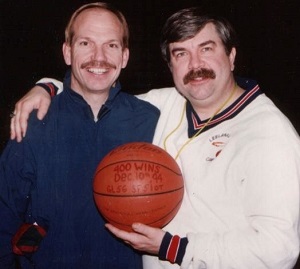 2010s – Returned in 2015 as assistant coach to Rich Ruelas and coached the boys junior varsity to 55-5 record over his first two seasons with three sophomores and a freshman on the varsity. Posted two 20-0 seasons.