And as Williams has grown, so too has New Haven’s success on the basketball court.

The Rockets will find themselves playing in their first MHSAA championship game Saturday night, thanks to a 78-49 win over Benton Harbor on Friday in what was the program’s first Semifinal as well.

Williams had 22 points, seven rebounds, four assists and three steals, continuing a closing run that could see him leave an unprecedented legacy at the school. He had 11 points, six rebounds and two steals in the first quarter Friday, setting the tone from the start.

“I just came out looking to be aggressive more, because last game I was just out there. I think I had to come in and prove something,” Williams said.

“I’ve learned I’ve just gotta stay calm and not get stage fright on the big stage. Learning to play defense and what team basketball really is, I think I’ve learned that over the (last) few years.”

Williams, a 6-foot-5 guard, entered this week averaging 20.9 points, 6.5 rebounds, 4.1 assists and 3.8 steals per game. New Haven coach Tedaro France II said after Friday’s win that upping his defense has made Williams a complete player – and that newfound all-around game has made him “one of the hottest players in the state right now.”

The first Semifinal came three days after the Rockets' third straight Quarterfinal. They are now 72-5 during this three-season run, and Williams’ rise is just an example of how experience has benefitted the team as a whole.

“That’s something as a coach you can’t teach,” France said. “Kids have to play in big games, and sometimes like with these guys, we have to fail first before we have success. And we’ve failed a lot. 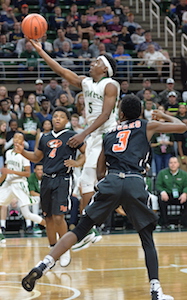 “Me, I say to our kids, let’s win today. And in practice each day, we fail. I say, let’s learn from our mistakes. I don’t mind if they make 10 mistakes, but let’s not make the same ones. And I think our kids are learning to play through adversity. They know they can make mistakes, then just go back and get back on defense."

Following Williams’ hot start, New Haven took a 22-10 lead into the second quarter and a 43-19 advantage into halftime. The lead got up to 38 during the fourth quarter before Benton Harbor (22-4) finished on a 9-0 run.

The Tigers entered the postseason ranked No. 5 by The Associated Press – New Haven was No. 3 – and had plenty of success as well this season. But they struggled this time to get into a groove against an opponent that beat them at their own game.

New Haven excelled defensively, holding Benton Harbor to 33 percent shooting and taking advantage of 17 turnovers. The Rockets turned on the transition game, to the point Tigers freshman center Carlos Johnson said, “When we’re running up the floor … they were already up there.”

Benton Harbor also is used to outrebounding its opponents, and Johnson had 10. But as coach Corey Sterling said, it was like New Haven had “two or three Carloses” – the Rockets won the rebounding edge 44-31.

“Pretty much we do pressure defense and get out in transition, but they didn’t turn the ball over and they made shots, and that’s pretty much it,” Sterling said. “It seemed like they had an answer for everything we threw at them tonight.”

In addition to Johnson being one of the most highly-regarded freshmen in the state – and finishing with nine points and five blocks to go with those 10 boards – the game also featured one of the state's top sophomores in New Haven forward Romeo Weems, who tallied 14 points, 13 rebounds and five assists. Sophomore guard Roland Jeffery II added 10 points for the Rockets.

Junior guard Elijah Baxter scored 14 points to top Benton Harbor, which played in its second Semifinal in four seasons – and perhaps began a string of championship weekend trips to come.

“We’ve only got two seniors really in our rotation, and this is a good experience for guys like Elijah, Carson, Shawn (Hopkins) and Dennie (Brown),” Sterling said. “Now we know how to get here … now let’s work hard in the summer to take the necessary steps to try to win it all.”