ROSEVILLE – Something happened last February that produced a dramatic effect on the Roseville boys basketball team.

It’s difficult for Roseville coach Hassan Nizam to put into words – but he’s certain that his team’s trip to Ann Arbor to play Pioneer and, more importantly, their visit to the Crisler Center to watch a University of Michigan practice had a positive impact on last year’s team and the program as a whole.

“(The U-M staff) gave us a tour,” Nizam said. “It was eye-opening. There was something about it. I can’t even explain it. We’ve lost twice since. Maybe it turned them into dreamers.”

Roseville won seven straight after losing that game to Pioneer before a 44-39 defeat to Macomb Dakota in a Class A Regional Semifinal ended the Panthers’ season.

They’ve stormed back this winter and sit 13-1 entering the final month of the regular season, with their only loss coming at Dakota, 55-52, in the fifth game. Roseville avenged that loss with a 63-56 victory at home Jan. 15 and is ranked No. 3 in Division 1 in the latest Associated Press poll.

The Panthers are 8-1 in the Macomb Area Conference Red and have clinched a share of the title. They can win it outright with a victory at Sterling Heights Stevenson on Monday.

After that and over the next two months, Roseville is shaping up as a possibility to not only make school history, but carry its entire area into an elite scenario for the first time.

Teams from Macomb County have rarely been relevant come tournament time. Not only has a Macomb County team never won a Class A (now Division 1) title, the county has never been represented in a Class A Final in boys basketball. Warren DeLaSalle made the Class B Final in 1982 and has come close to breaking that county barrier, reaching Class A Semifinals in 1986, 2007 and last season. Dakota also lost in the Class A Semifinals in 2016.

Enter Roseville. The program has had limited success in the MHSAA Tournament – last season the Panthers finished 16-7 and won just the fourth District title in program history. They’ve never won a Regional.

Talent has come through in the past, but didn’t always guarantee a postseason run. Sir’Dominic Pointer (known as Dominick Pointer while attending Roseville) played two seasons at Roseville before transferring to a prep school in North Carolina, then played collegiately at St. John’s and was selected as the 53rd pick in the 2015 NBA Draft by Cleveland. He is currently playing professionally in Israel. Still, Roseville was not able to get past the District round in either of his seasons.

But on the positive side, this team is coming off that District title and has plenty of experience to go with ability. Four starters are back including seniors Darien Banks, Lazell Judge and John Ukomadu. The other returning start is junior point guard Martell Turner who, if he isn’t the team’s best, is likely the team’s most important player. The fifth starter is senior Deshaun Wright.

At 24, Nizam is one of the state’s youngest head coaches and his upbeat coaching style has had a rippling effect. This attitude impressed those who were responsible for hiring him, notably school principal Pat Adams.

“Our search for a new coach was centered on someone who loved kids and was passionate about the game,” Adams said. “In Coach Niz, we struck gold on both accounts.  A big part of changing the culture in a building is to have the kids believe in themselves, feel pride in who they represent, and respect the leaders who spend time with them. We believe Coach Niz has demonstrated that he's a very important part of that formula and will continue to be as the program evolves.”

A 2012 graduate of Dearborn Fordson, Nizam spent three seasons as the junior varsity and varsity assistant at Fordson before becoming an assistant at U-M Dearborn for the 2016-17 season. Nizam said one of his first objectives when he was hired at Roseville in May of 2017 was to build consistency. 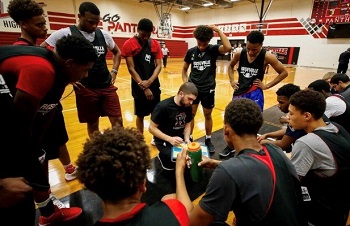 “I was just an assistant coach looking for an opportunity,” he said. “As far as the program here, I knew they had had some success. The transition was pretty smooth, and the kids bought in. (Sir’)Dominic stops by every now and then, and the kids appreciate that. The guys have to understand that individual success comes from team success.”

Last season was one of the most successful in school history. As a member of the MAC White, Roseville competed in the MAC Red/White division playoffs and defeated Clinton Township Chippewa Valley for the title. Two weeks later, Roseville won the District title by defeating St. Clair Shores Lake Shore 80-77.

Roseville opted to move up to the MAC Red this season, and one result is a more competitive schedule. In addition to the increase in competition the Red affords, the Panthers defeated DeLaSalle to open the winter, then defeated Division 2 contender New Haven at New Haven and slipped past Cincinnati Withrow (Ohio), 42-39, at the Motor City Roundball Classic.

“We kind of have the approach that we want to get better each game,” Nizam said. “We’ve got a chance to win the MAC Red, the MAC title, a District title and a Regional. It’s that day-to-day thing we like to emphasize.”

What makes this team better than last season’s is Roseville’s play on the defensive end. The players are communicating better, switching assignments when teams run a motion offense and playing help defense.

In Roseville’s 65-60 victory over New Haven, the Panthers held Romeo Weems – New Haven’s best player and a likely candidate for the Mr. Basketball Award – to 20 points. As a team, Roseville has allowed 45 points per game. And just one team, New Haven, has scored in the 60s.

“That New Haven game was big for us,” Nizam said. “They hadn’t lost a game at home in like six years. We weren’t going to let Weems beat us. Our kids believed in each other that game. After that, their confidence went way up. It showed we can be a problem for any team.”

Offensively, Roseville likes to score in transition, but its half-court sets have improved since last season as well. Banks is an accurate 3-point shooter and leads the team in scoring at 21 points per game. Turner is the table-setter who averages seven assists. Ukomadu is a 6-foot-7 post player who jumps well, and Judge is a 6-1 lefty who plays the wing.

Wright is a 6-3 power forward who possesses a good mid-range jump shot. And he’s one example of why the program has shown promise and is on the rise. Wright never played high school basketball before this season. He played basketball in middle school before concentrating on football his first three years of high school.

Wright saw the success the team had last season and, in the end, it was Nizam’s coaching style that won him over.

“I caught a few games at the end of last year,” Wright said. “I liked (Nizam’s) enthusiasm. He wants to win as much as we do. He wants it just as bad as we do. My mom (Ruth Wright) told me, to be a two-sport athlete coming out of high school would help me in college. I would love to play either one in college.”

Wright has yet to decide on which school he will attend next fall, and he is expected to take a visit to Urbana University in Ohio before making his decision.

In the meantime, Wright’s focus is on his teammates and continuing what they together have started.

“Once we step on the floor, we’re connected,” he said. “Our goal is to get better every game.

“Sharpen the ax. And we are getting better every day. I know by the way we compete against each other in practice.”