EAST LANSING — Milan's postgame celebration quickly went from the court to the stands.

Spectators who didn't understand what was taking place were befuddled when the Big Reds headed into the seats at the Breslin Center before receiving their championship trophy. One by one, they hugged an older gentleman many of them may not have heard of until a few days earlier.

The man was Harlan Benjamin, a member of Milan's 1948 MHSAA Class C championship basketball team. The Big Reds, playing beyond the Regionals for the first time since, found inspiration from this living, breathing embodiment of the school's athletic history.

"He inspired them before the game," Milan coach Josh Tropea said after the championship drought ended with a 78-59 victory over Benton Harbor in the Class B Final on Saturday. "They wanted to make sure they showed their appreciation."

Benjamin, 81, was a sophomore on the Milan team that beat Saginaw Ss. Peter & Paul, 45-42, for the Class C title. He went on to win the 120-yard and 180-yard hurdles at the 1950 Class C Track and Field Final, an accomplishment that led to his enshrinement in the Milan sports Hall of Fame.

He spoke with the Big Reds on Tuesday before their MHSAA Quarterfinal game against Wayland. He sought out Milan assistant coach Chris Pope before Saturday's title game and presented him with a memento.

"He gave us his state championship patch and he duct-taped over the '1948' and put '2014,' and said, 'Go win one for me,'" Tropea said. "To have him here and to have him on the floor with us after the game, like I told the kids on Thursday before we came here, whether you win this thing or not, someone's going to want you to speak in 40, 50, 60 years from now. After this weekend, they've solidified that. They're going to be remembered forever in Milan."

There's a good chance that it won't take 66 years for Milan to celebrate another MHSAA championship.

Four of the Big Reds' five starters are juniors, including the stars of Saturday's game. 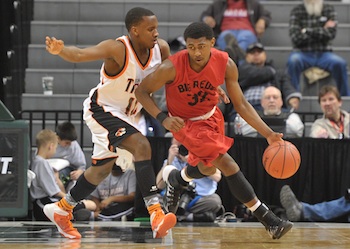 Junior guard Latin Davis was 7 for 7 from 3-point range, tying the Finals record for baskets beyond the arc, while scoring a career-high 34 points. Nick Perkins, a 6-foot-7 junior center, scored 24 points on 10 for 16 shooting and grabbed 10 rebounds.

"All year, we've been selling that players three through eight have to be the difference, because we know what Nick and Latin are going to do," Tropea said. "Before we went on the floor tonight, we said, 'Tonight, it's about the stars.' The best players showed up, and they won the game for us."

He became the fifth player in Finals history to hit that 3-point mark. But only he and Berrien Springs' Shelby Wood (Class C, 2006) had a perfect shooting night from long range.

"I was coming off screens and was just feeling it, so I just shot it," said Davis, who averaged 1.3 3-pointers a game and never made more than five before Saturday. "My coach has been telling me to shoot off ball screens all year, so that's what I did tonight. I just kept shooting. I made one and kept hitting them and just kept shooting."

"Basically, we just tried to get out of the way," Perkins said. "After you set a screen once and he's shooting like that, he's basically going to make every one. After the fourth one, when we saw them start falling and he's draining it, you just keep letting him shoot."

Benton Harbor took its only lead when a 3-pointer by Jaton Gunn made it a 3-2 game with 6:07 left in the first quarter. Milan never trailed after scoring the next six points.

The Big Reds led 22-15 after one quarter, hitting seven consecutive field goal attempts during one stretch. They built their lead to 32-22 on a 3-pointer by Davis with 4:27 left in the second quarter, taking a 43-35 lead into halftime. Davis had 17 points in the first half on 7 for 17 shooting, dishing out three assists. Perkins had 14 points in the first half, shooting 7 for 11 and grabbing five rebounds.

Benton Harbor did not sub in the first half, while Milan got backups Thomas Lindeman (six minutes) and Garrett Gardette (four minutes) extensive playing time in the second quarter after going with its starters for the first. The Tigers' first substitution came with 6:06 left in the third quarter.

"The difference was in the third quarter we actually started playing some defense," Tropea said. "We hang our hat on our defense. It really wasn't there in the first half. That's all we talked about at halftime was we've got to do a better job rebounding the basketball, not giving up so many second-chance points and transition points. We really clamped down in the third quarter."

It didn't appear that this would be the season that Milan (25-3) ended that title drought when the Big Reds lost their first two games and started out 5-3. But they ended the season with a 20-game winning streak.

Benton Harbor (17-10), playing in its 10th MHSAA Final and first since 1993, was attempting to win its first crown since repeating as Class A champion in 1965. Overcoming Milan's 58.5-percent shooting from the floor proved to be too much for the Tigers.

"They were hot," Benton Harbor coach Corey Sterling said. "We had a game plan. We had hands up, but (Davis), I don't think he missed a three. Then the big (Perkins) was a force down low.

“We already knew, win or lose, we were proud of this bunch. We came in unranked. So, it might hurt right now, but like I told you (Friday), God is still good. He blessed the city. These two seniors (John Robinson Jr. and Cortez Moore) brought the city together. It's something to be proud of. There's been love all over. We just ran into a hot team tonight."

Robinson had 19 points, Jaton Gunn 16 and Moore 13 for Benton Harbor. Gunn had 11 points in the first quarter, hitting three 3-pointers.

Milan played without starting senior forward Jake Novak, who tore the anterior cruciate ligament and meniscus in his right knee during Tuesday's Quarterfinal victory. He walked onto the court on crutches during pregame introductions and greeted each of Milan's starters as they were called out.

"It felt really great to know that everybody cares about this team so much," Novak said. "It's really nice to see the whole community come out and support the team. It's nice to know everybody cares. Even though I can't play, I was doing everything I can to help the team."

PHOTOS: (Top) Milan celebrates its first MHSAA title since 1948 by hoisting the trophy at the Breslin Center. (Middle) Milan’s Latin Davis tries to get around Benton Harbor’s John Robinson, Jr.

HIGHLIGHTS: (1) Benton Harbor's John Robinson Jr. scored in transition in the second quarter of the Class B championship game against Milan. Robinson led the Tigers in scoring with 19. (2) Nick Perkins makes a Calvin Johnson-esque catch of a long pass by Lance Lewis for the dunk in the Class B title game. Perkins had 24 points and 10 rebounds for Milan, which defeated Benton Harbor, 78-59.