EAST LANSING – Carson Meulenberg and Trenton Koole had never played a game of this magnitude before taking the Breslin Center floor Thursday.

But their dads had, and perhaps indirectly that provided them a little experience. At least it seemed like it.

Covenant Christian didn’t seem bothered by any of the usual anxieties teams face when they play during the final weekend for the first time. The Chargers – in an MHSAA Semifinal for the first time since winning Class D in 1994 – got ahead early and never slowed in downing Manton 62-35 to earn a spot in Saturday’s Class C championship game.

Koole’s dad Scott played on that 1994 team that beat Eben Junction Superior Central 79-70 in the championship game. Scott Koole also played with Dave Meulenberg on the 1993 team that beat Muskegon Western Michigan Christian 53-42 to win the Class D title that season as well.

“To just stay calm, keep your composure, play your best,” Carson Meulenberg recalled of the advice his father gave him before Thursday. “Don’t worry about a lot of things. A lot of it is worrying about nothing, so just go play your game.”

And Covenant Christian’s game this season frequently has focused on defense, which was lockdown against the Rangers and will be especially key in Saturday's 4:30 p.m. Final against Flint Beecher.

Koole blocked Manton’s first shot of the game, and Covenant Christian had three blocks during the first five minutes. The Rangers still hung in to trail only 11-7 at the end of the first quarter, but the Chargers (21-5) scored the first 19 points of the second and never led again by fewer than 20.

They held usually sharp-shooting Manton (21-5) to 22 percent success from the floor, including 16 percent from 3-point range.

“Finally,” Calvin Christian coach Tyler Schimmel said. “To be honest, since the first District game, we haven’t played that well. I told the guys before (this) game, you’re due for one, especially defensively. 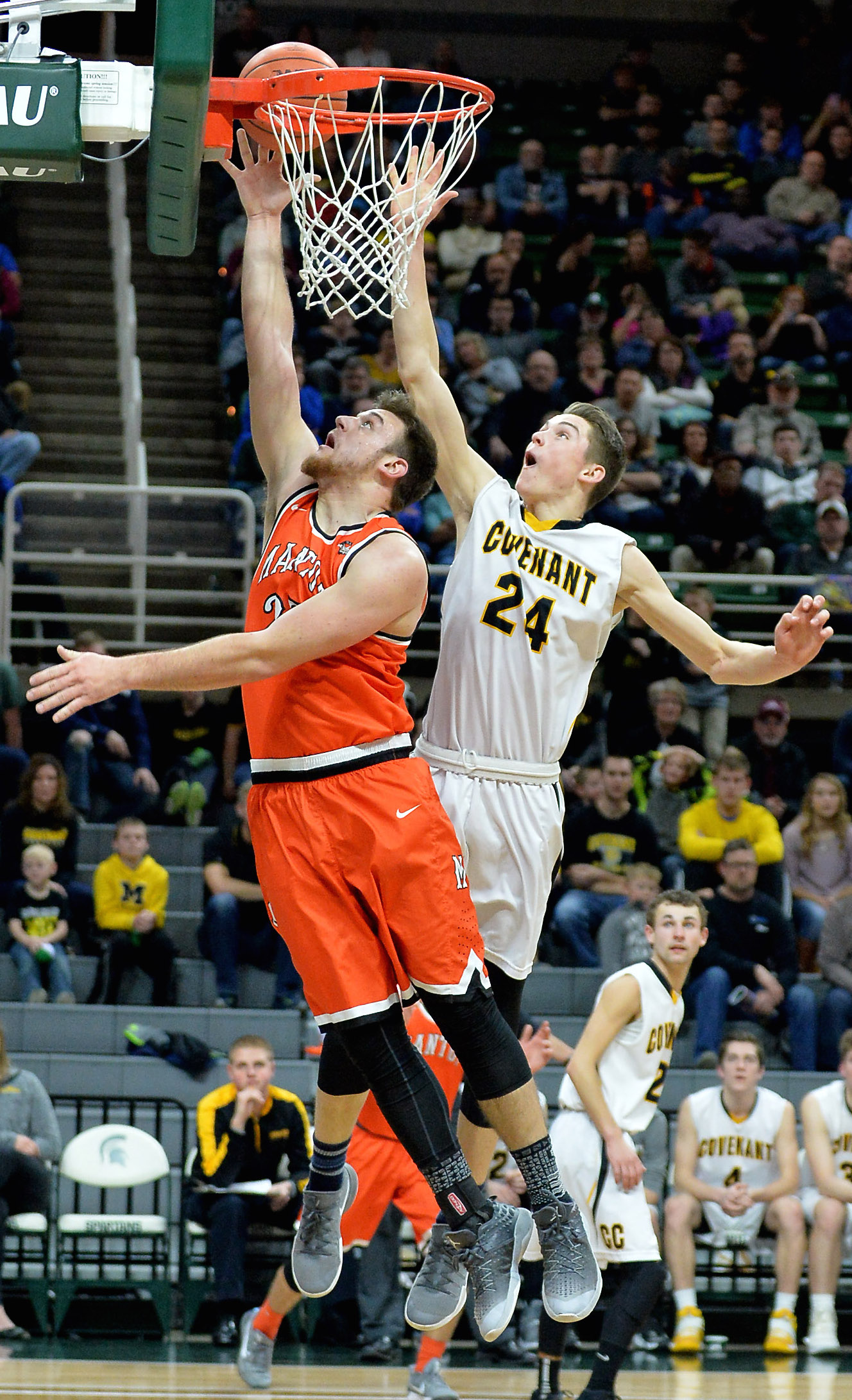 “This year, we actually have (had games like this). That’s why I kept telling my guys they’re a good team. They’re capable of doing those types of things.”

“On film, we knew they were going to be athletic just by watching them,” Manton coach Ryan Hiller said. “Once they started getting offensive boards, and the transition game, and I don’t know how many shots they blocked that first half … through the first five minutes, we saw a trend there, and we had to adapt the things we normally do, and we struggled there.”

Manton was playing in its first Semifinal since 1996. The Rangers had been eliminated in the District Finals the last three seasons, losing those games by a combined seven points.

Covenant Christian is riding a streak of 14 wins in 15 games, and now has some bragging rights at home in addition to Saturday’s opportunity.

“He talks about it all the time to me, brags and says he made it this far,” Koole said of his dad's Finals memories. “Now I can go back to him and tell him I did the same thing.”

PHOTOS: (Top) Covenant Christian’s Benji Kuiper (12) works to get around Manton’s Jayden Perry during Thursday’s Semifinal. (Middle) The Rangers’ Wyatt Baker gets up a shot with the Chargers’ Carson Meulenberg (24) defending.