And for the first eight minutes Saturday, as these Jets played together for the last time, they couldn't have been much better.

Buckley never recovered completely from one of the most impressive opening barrages in recent Finals history. But the Bears did make North Central work to add this latest win, a 78-69 victory to claim a third straight Class D championship.

In their last game together, Jets senior starters Jason Whitens, Dawson Bilski, Bobby Kleiman, Marcus Krachinski and Seth Polfus all contributed as the team made its first 15 shots. Bilski tied the MHSAA championship game record for points in a quarter with 18 in the first as North Central as a team fell just shy of making the list for most points in a quarter, putting up 38 total – enough of a run to help them survive a nearly-as-epic comeback by the Bears, who also were undefeated heading into the day.

“Over the past couple of years, kids like me and Seth and Marcus, we never had the starting spots coming up. We had to wait a little while. We had to play our role,” Kleiman said. “But having two players like Jason and Dawson, that makes us just as good a players as them. They help us every day. They’re the ones who make us better. When things get tight, we look to them.”

“(But) we’re a team. And that’s where a lot of teams lack, is the team part. They have individuals, but us, we’re family. We love each other. And this whole ride has just been crazy, and we’ll never forget it.”

The Jets finished 28-0, and sit 83-0 over the last three seasons after again extending the nation’s longest active winning streak. Whitens capped his high school career with a 108-1 record over four varsity seasons, giving him not only a state record for wins but also breaking the record by four for most varsity boys basketball games played in MHSAA history. Bilski also started on all three championship teams and joined Whitens earning Class D all-state honors earlier this week. On Jan. 27, with their 66th straight win, they broke the MHSAA record for consecutive wins previously set by Chassell from 1956-58.

Coming off Thursday’s one-point, buzzer-beating Semifinal victory over Southfield Christian, Saturday’s start made it seem like a Jets victory lap was about to begin. At the end of the first quarter, North Central led 38-20 and had made 15 of 17 shots from the floor.

But much to Buckley’s credit, it didn’t show a sign of folding. The Bears were dominated by star juniors and will surprise no one if they make another run in 2018. Despite entering Saturday with a 26-0 record, they weren’t expected by most to win – but never let that sink in, even while staring up at a double-digit deficit less than four minutes into the game. 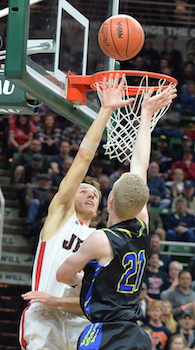 “I was just thinking man, they’re shooting the lights out. They’ve been here before, they’re all seniors, they want it that bad. We’ve just got to match their intensity,” Buckley junior Denver Cade said. “Sometimes they’re just putting them up there, going in, and you’re holding on. After that’s done, you’re just right back going at them, so we did.”

Buckley won the second and fourth quarters and tied North Central 10-10 in the third, taking advantage in part as Bilski left the game for an extended period after picking up his fourth foul just 1:32 into the second half.

But his absence may have only kept the Jets from increasing the lead – he re-entered with 6:30 to play and the Jets up 13, but from there Buckley launched a 13-3 run over four minutes to pull within 68-65 on Ridge Beeman’s basket with 2:41 to play.

“If we score 38 points in a quarter, typically teams kinda roll over,” North Central coach Adam Mercier said. “That didn’t happen today, and that’s a credit to those Buckley kids. We had to fight tooth and nail with them in the fourth quarter. I was just so proud of our kids, the way they finished this game.

“For these guys, it just comes with the territory. I sat here two or three years ago, trying to explain this group of boys – now they’re men – we just talked about that ‘it’ factor. It starts with these seniors and the seniors we had in the past, and that ‘it’ factor rings through with all of them.”

And as Kleiman said, when things got tight, the Jets turned to their accomplished stars.

Bilski and Whitens combined to score nine points during a 10-4 run to finish the game and a legacy that may not be approached for another half-century.

“You don’t think a team’s going to back down. You always have to keep coming back at them,” said Whitens, who also quarterbacked two straight undefeated football teams. “Respect to them for just keeping coming at us. It makes the game more fun. That’s what it’s all about, opponents going head to head, and they didn’t quit. We just had to keep going at it, and had a lot of fun doing it.”

Bilski, who will continue his career at Michigan Tech, scored 25 points in just 20 minutes, making 8 of 9 shots from the floor. Whitens – a Mr. Basketball Award finalist this season – had 23 points on 8 of 11 shooting, while Kleiman added 12 points and Krachinski had 11 and seven assists.

All five Buckley starters should return next season.

“We’re going to use that as fuel. When we see them holding up that trophy, we’re not going to pout and cry about it,” Harris said. “We’re going to get really, really mad, get back in the gym, and do it really hard and see if we can win next year. You haven’t seen the last of us.”