ESCANABA – There was no drama because the game had virtually been decided by halftime, so the North Central Jets merely exchanged hugs and pats on the back after erasing a 59-year-old state record Jan. 27. 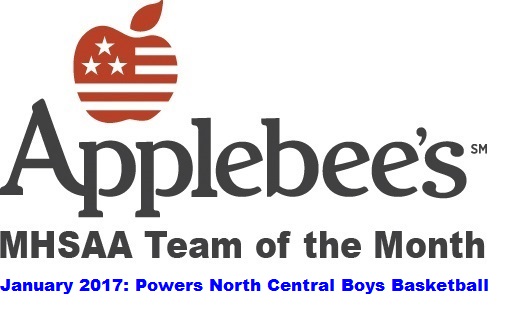 The Jets shelled neighbor and arch-rival Bark River-Harris 76-29 for their 66th consecutive win. That snapped the MHSAA record set for consecutive wins by fellow Upper Peninsula quintet Chassell from 1956-58, and they reportedly carry the longest active winning streak in the nation with 69 straight victories.

The capacity-plus crowd of about 1,000 cheered the record-setting performance, but the running clock had been going since the first minute of the third quarter and everyone knew the only thing to be determined was the final score.

The only other major excitement also came early, when Jets senior Dawson Bilski converted a three-point play with 17 seconds left in the first half to enter the 1,000-point club. He finished the night with 21 points and 1,002 career points.

The build-up to the win streak had taken precedence over Bilski’s approach primarily because this time of the season spawns several 1,000-point producers, while Chassell’s iconic mark had been in the discussion stages since North Central won its second straight Class D championship in March.

The Jets broke the record the same way they have waltzed through the past four seasons, with stifling defense, balanced scoring and another dunk by 2016 Associated Press Class D Player of the Year Jason Whitens.

Surprisingly some on-lookers have downplayed North Central’s streak, with coach Adam Mercier indicating there were questions about the competitive level of the schedule. Mercier simply pointed out the Jets were 4-0 in back-to-back trips to MHSAA Finals weekend at Michigan State University’s Breslin Center en route to consecutive Class D championships.

Teams can only play the schedule given them, and North Central is enjoying a fourth straight unbeaten regular season, in a conference annually considered the most competitive and balanced in the Upper Peninsula. The only loss during that span came March 18, 2014, when Cedarville won a Class D Quarterfinal 81-79 in Marquette.

While the regular season success is hard enough to fathom, building a winning streak that is into its third straight season with a different cast each time helps put the record in better perspective.

Not only have the Jets defeated teams in their conference and their region, they have rolled through the district, regional and state tourney rounds unchecked.

Perhaps the biggest question may never be answered. Will anyone eclipse North Central’s record, wherever it ends? After all, it took 59 years to surpass Chassell’s vaunted 65-win figure. If the Jets reach 80 straight, and the chance of that happening is pretty good, what are the odds of anyone else being that fortunate? This is a record that could realistically never be exceeded with just about everything stacked against such an attempt as the seasons unfold.

While the Jets now possess the state record boys streak, they are only second among schools in Menominee County for the longest win streak in state history.

Even more astonishing, North Central and its 115 students own the MHSAA record of 26 straight victories in 8-player football. The Jets, with many athletes on that team who also play basketball, have won the past two 8-player football championships to cap back-to-back 13-0 finishes to the only seasons they have played that version of the gridiron game.