EAST LANSING – Powers North Central can play too fast. That’s what happened the last time the Jets came to Breslin Center, at the end of 2012-13.

But few teams have been able to slow them down when their clicking like they did during Thursday’s final Class D Semifinal.

North Central’s high-octane offense burned from the start en route to earning the team’s first MHSAA championship game berth since 1984 with a 71-46 win over Fulton.

The top-ranked Jets, averaging nearly 72 points per game entering the weekend, nearly hit that mark after opening on a 29-4 run that stretched more than two minutes into the second quarter. They scored only 36 points total in their last trip to Breslin, a Semifinal loss to Wyoming Tri-unity Christian two seasons ago.

“Me personally, I just learned last time we played here that we played too fast, and we were kinda nervous,” said senior Rob Granquist, also a starter as a sophomore and the team’s leading scorer in that loss. “We didn’t get our shots we wanted. But tonight we just played our game that we’ve played all year, and it worked out great for us.”

North Central (26-0) will take on Morenci in the 10 a.m. Class D Final on Saturday, seeking the second MHSAA title in program history.

Coach Adam Mercier listed off Thursday a handful of lessons he learned during that 2013 trip downstate. He wanted to get more players on the floor this time – and 11 saw minutes. And he wanted his team to come out aggressively – and they fired 17 shots in the first quarter, making nine. 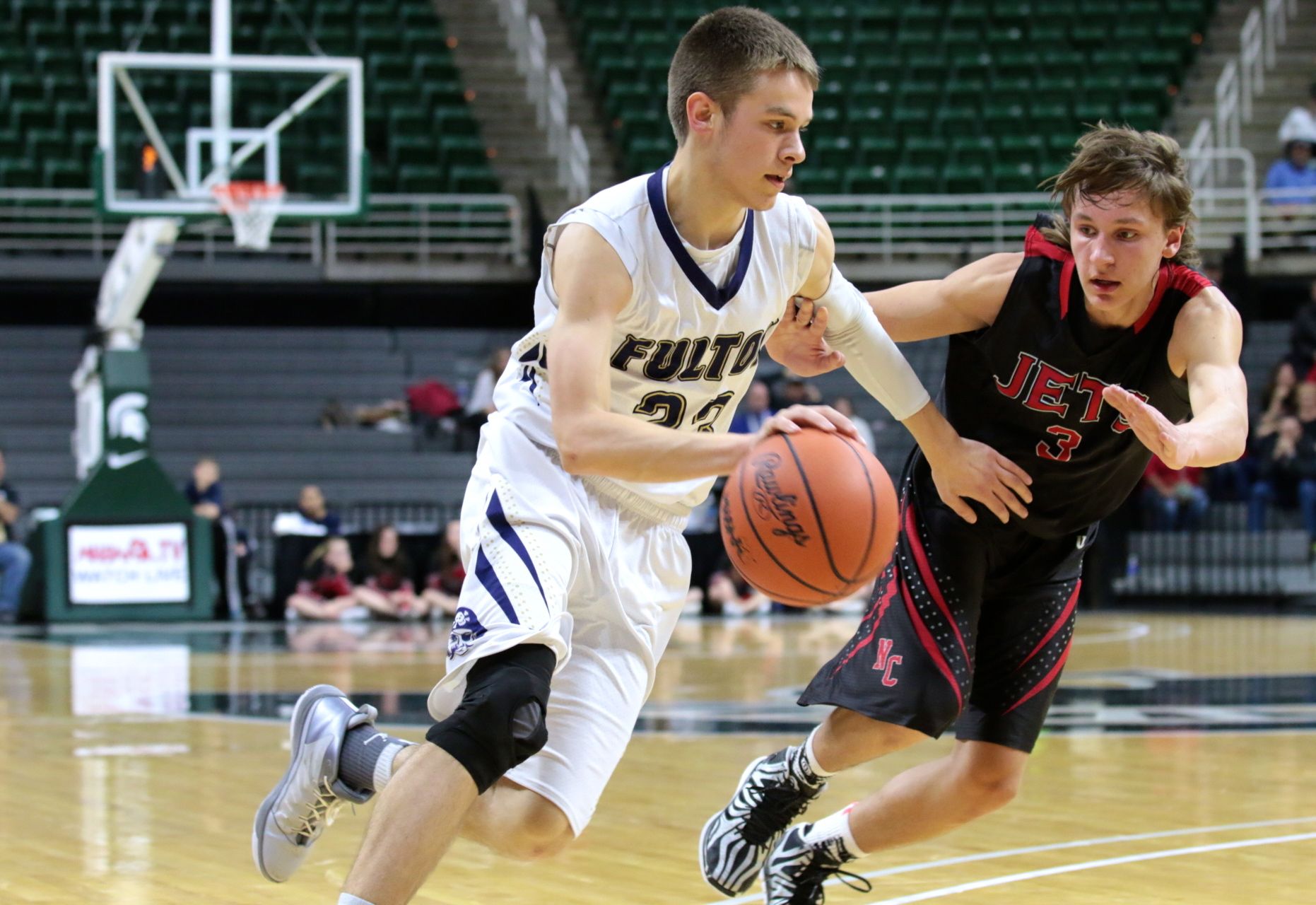 “Two years ago we came down here and we were a little awestruck, and we played pretty tentatively,” Mercier said. “What we talked about Thursday is being the aggressor, not coming out soft. We wanted to take some shots and see what happens.

“We felt whoever could throw the first punch early would have a slight advantage. … We were able to get that first punch, and it was a big punch.”

Shooting has been the strength of a Fulton team with more than 200 3-pointers this winter. But North Central – with three starters 6-foot-4 or taller – had a few inches on most of Fulton’s top players and pushed the Pirates to take some deeper shots than they likely wanted.

Fulton (21-5) made only 29 percent of their shots from the floor and just five of 24 tries from 3-point range. North Central’s size also played to a 45-35 rebounding advantage and a 40-18 edge in points scored in the paint.

“We started settling for shots early, and it just kinda snowballed as they hit some shots. And then it felt like we had to hit some 3s,” Fulton coach Todd Walden said. “That’s tough against a team that’s that good when they’re going to get a good look every possession, and when they happen to miss they’re going to battle on the boards.”

Junior guard Colton Antes was a bright spot for Fultonfrom the perimeter, making 5 of 11 shots and three 3-pointers for 15 points.

Granquist had 14 points and seven rebounds and junior center Morgan Cox came off the bench for 12 and six, respectively, for the Jets. But the most impressive performance of the day’s four Semifinals arguably came from sophomore guard Jason Whitens, who had 16 points, nine rebounds and nine assists in only 23 minutes.

Mercier mentioned how Whitens' dad is a fan of Magic Johnson, and how the 6-4 forward has patterned his game on a player he’s seen only on replay. Jason Whitens averaged 16.4 points, 6.7 rebounds and 6.1 assists per game entering this week.

“That’s what we expect out of him. It’s hard to say as a sophomore. (But) more importantly, that’s what he expects out of himself,” Mercier said. “He’s a very confident player, but at the same time he’s very humble. He could put up 20 shots a game and I’m sure score mid-20s if he wanted to, but he’s the type of player that makes other players around him better by his ability to pass it, defend and rebound.

“We expect the same thing out of him Saturday. No pressure.”