EAST LANSING – Pewamo-Westphalia always seems to be in the mix. The Pirates haven’t had a losing record since 1998-99, the last season before coach Luke Pohl returned to the program after two years away and led 19 straight winners.

Maybe last year’s seniors, coming off an 18-6 finish, wanted to provide their replacements with a little bit of additional motivation.

“Our seniors last year, pretty much all of our starters, were saying we’re not going to be good this year,” P-W senior Andre Smith said. “That we were actually going to be worse. That motivated us to all put in work over the offseason and get better.

“We were putting in a lot of work. But (to get) this far? I didn’t really think that much. But we’re here and we put in that much work, and it’s paid off.”

For the third time in its history, P-W has earned an opportunity to play for its first championship. The Pirates advanced to Saturday with a 60-45 Division 3 Semifinal win over Erie-Mason on Thursday at the Breslin Center.

After another long football season – P-W finished 11-1 and made the Division 7 Regional Finals – a mostly new crew of basketball contributors worked to get up to speed before an opening night that also was a week earlier than usual this season.

To be honest, P-W may not have been even the favorite in the Central Michigan Athletic Conference – which produced three District champions this winter. But the Pirates downed favorite Dansville by 18 in their second game of the season, and Smith and his teammates knew then they might be on to something special – even if Pohl as well didn’t really expect to still be playing on the season’s last day.

“You just don’t know. You only have two starters back, but we’ve just jelled,” Pohl said. “We’ve done a lot of things well defensively, made it hard for offensive teams. We have great length, and a lot of guys have put in extra time. Andre took a huge jump, every guy took a huge jump. (So) I never dreamed that.” 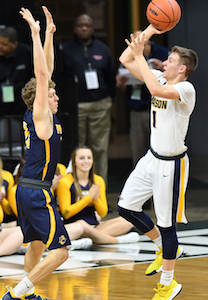 It’s also likely no one expected the Pirates to jump out to a 15-0 start Thursday. But that wasn’t enough to count out Erie-Mason and particularly junior guard Joe Liedel.

Another Liedel basket with 1:27 to play in the third quarter kept Erie-Mason only three points behind.  But Smith pushed the margin back to nine with the first basket of the fourth, and the Eagles made only 3-of-16 shots from the floor over the final period as P-W pulled away.

“A lot of times, those (big early leads) come back to bite you,” Pohl said. “I’ve seen it happen too many times; a team lets up little bit, starts to feel the pressure as the other team is coming back. … The guys persevered. They battled through this all year long, and I couldn’t be more proud of the way we ended up finishing.”

Liedel had six rebounds and three assists to go with his 31 points, and senior center John Sweeney grabbed eight rebounds for Erie-Mason.

“My biggest thing is to keep getting better this offseason. I just want to keep taking everything we’ve done this year and be back here next year and be even better,” Liedel said.

Erie-Mason (23-3) made it to this final week by winning its first Regional title since 1973, one of many achievements as eighth-year coach Kevin Skaggs has built the program.

Two of his first three teams finished with sub-.500 records, but his last five all have been winners, with this one also earning the first league title of his tenure.

P-W was model of consistency that Skaggs, who came from the college ranks, used as something of a “benchmark” for the Erie-Mason program.

“When we got to Mason eight years ago, they had had only eight or nine winning seasons in 50 years of basketball,” Skaggs said. “I think this has been a continuous building project to get to this stage. It was not unexpected to get here. But what you can’t reproduce is the experiences that Pewamo has enjoyed. Those kids have watched the guys, when they were in elementary school, perform on this stage or at least get to the Regional Finals.

“Our guys are still in the process of they’ve created history. … They are creating the same things that the early teams that Luke coached during the late 90s and early 2000s (created).”

PHOTOS: (Top) Pewamo-Westphalia’s Hunter Hengesbach (10) sets up the offense as Erie-Mason’s Joe Liedel defends. (Middle) Liedel gets a shot up over the Pirates’ Collin Trierweiler.