EAST LANSING – Collin Trierweiler found himself outside with his older brother again, firing up free throws, one of his favorite things to do when he was younger.

Except this time, he was standing at the free-throw line at the Breslin Center, with no one else on his side of the court, less than a second remaining on the clock, and Pewamo-Westphalia’s first MHSAA Finals championship hanging on the shots he was about to take.

A meeting of undefeated finalists came down to the slimmest of margins Saturday at the Breslin Center. Trierweiler, on the line after an intentional foul was called on Iron Mountain with seven tenths of a second to play, made it through two timeouts before sinking the first shot, and a third timeout before making the second to put the Pirates ahead 53-52 and all but ice the Division 3 championship.

Trierweiler hadn’t practiced all postseason, and sat out multiple games with an ankle injury. But he played 26 minutes in the Final, on the court when it counted most.

“As a senior, right around the time when I get hurt, right as the playoffs start, it was frustrating, Trierweiler said. “Coach said it would be best to sit out the practices and just fight through the games. Every game I just had my teammates on my back saying you’ve got this, you’re fine, just keep playing the game. And when I was feeling pain, they’d help me forget about it.

“The free throws, I just tried to calm myself down and think about myself out in the driveway with my older brother. We used to practice all the time, and it was one of my favorite things to do. I always dreamed of a moment to be put on the free-throw line, a big moment. Maybe not quite this big, it was a little scary, but I tried to just block out the background, see the trees in my yard, and put them up and shoot them in.”

Trierweiler entered this week making 59 percent of his free-throw tries this season.

But his absence from normal practice activities the last few weeks may have been a blessing in disguise. 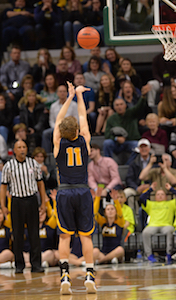 “I remember his mother telling me this season, (that) when he was just a little boy, he’d be dribbling the basketball in front of his mom saying, ‘Mom, someday I’m going to be the point guard at Pewamo-Westphalia,’ and he was so proud of that.”

The Pirates had led most of the first five minutes of the first quarter, but didn’t lead again until Trierweiler’s free throws at the end.
Iron Mountain (27-1) led by as many as eight points during the second and third quarters and by six multiple times during the fourth. Pirates senior Andre Smith took a six-point lead to three with a 3-pointer with 1:44 to play. After Trierweiler missed two 3-point tries to tie the score, he went in for a layup instead with 22.7 seconds left to bring the margin down to one.

Two free throws by Mountaineers’ sophomore Foster Wonders pushed the lead back to three, but again Trierweiler scored with 11.5 seconds left to make the margin one. Iron Mountain broke the ensuing pressure but was called for a travel, and on P-W’s last attempt to get down the court for a final shot, Trierweiler drew the intentional foul.

The ending was emotional for obvious reasons. Pohl said his heart went out to Iron Mountain. But he believed if Trierweiler hadn’t been fouled, he would have scored.

The Iron Mountain contingent certainly was disappointed, but completed a memorable run that saw the Mountaineers defeat last season’s Class C champ Detroit Edison in the Semifinal on the way to Saturday.

“We put in tremendous effort. It didn’t just start this year – it’s been going on for years with these guys,” Iron Mountain coach Bucky Johnson said. “Their effort has never been in question. I’m really proud of them for that. Pewamo, great effort by them too.”

“I thought our kids played awesome,” Bucky Johnson added. “They went toe to toe, both teams. Give them credit, give us credit, what do you say? … It’s part of the game. It stinks to be on this end of it.”