Newman joined Detroit East English’s first boys varsity basketball team as a freshmen for the 2012-13 season and will graduate as the first all-time great in the young program’s history (the school opened in 2012 after the closures of Detroit Crockett and Finney). In his fourth and final opportunity, the 6-foot-4 guard led the Bulldogs to their first Detroit Public School League Tournament title to earn the Michigan National Guard’s “Performance of the Week.”

Newman scored 17 of his game-high 28 points during the first half of a 71-70 semifinal win over Detroit Collegiate Prep on Feb. 12, then scored a game-high 24 points in the 86-62 championship game win over Detroit Renaissance on Feb. 19 (East English had lost to Renaissance by four in a 2015 PSL semifinal). For the season, Newman is averaging 22 points, six rebounds, four assists and 1.5 steals per game for East English, which is 16-3. Not surprisingly, Newman has the school record for 1,591 career points and also with 193 3-pointers – which are enough to make the MHSAA’s career list in that category, and while he has at least two more games to play. Newman has been a strong shooter throughout his career, but said he's improved his rebounding and leadership most as a senior.

He also earned all-city honors in cross country in the fall and ran on that team all four years of high school along with a number of his teammates – he credits cross country with helping the basketball team train to play its uptempo style during the winter. Newman has signed to continue his basketball career at George Mason University in Virginia. He is unsure what we will study, but said the sciences are among his favorite and best subjects.

Coach Juan Rickman said: “He’s always worked hard. He likes to stay in the gym. That’s one of the biggest impacts he’s had with our program. He’s been the catalyst. When we started the (PSL) run, he made the conscious decision in his mind that he was done losing, coming up short. When the opportunity presented itself, he became more of a leader. He just didn’t want to lose.”

Performance Point: “It was a tough road. I just wanted to lead us there. We came up short (in the past), so many people were counting us out. I definitely didn’t want to come up short this time. 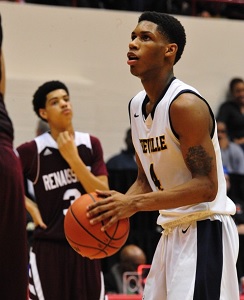 Best in Bulldogs history: “It means a lot, but I know I’ve got a whole lot of work to do. It’s going to be great honor (though), but we’re not done yet. The group of guys, we go so deep. That’s been my favorite part, just being around those guys. (My role) is just to push everybody, to lead, to their limit. I try to get the best out of all my teammates; they respect me.”

Had to be a Patriot: “Just the coaching staff (at George Mason), they were telling me basically what Coach Rickman tells me. They work extremely hard, and really they don’t have anybody to score the ball like that, so I want to go in there and help them where they’re struggling.”

Create like Curry: “Steph Curry; I don’t really watch him too much, because I’m not him. But sometimes I try to be like him. How quickly he gets it off, creates his own shot, that what I like about him. ... I want to get better at becoming the combo (guard), getting the ball when I need it, distributing it, seeing the floor on the defensive end and being more aware.”