Whitens has played his share of big games as quarterback of this school year’s MHSAA 8-player football champion and leading scorer on the basketball team that won the Class D title in 2015 with a perfect record. North Central’s 39-game winning streak was on the line as the Jets trailed Class B Menominee by six points with eight minutes to play Feb. 9. The 6-foot-5 Whitens earned the Michigan National Guard “Performance of the Week” by scoring 11 of his game-high 31 points during the fourth quarter, including the go-ahead layup with seven seconds left as North Central held on for a 64-60 win.

North Central has since extended its winning streak to 42 straight with a 15-0 start to this winter. Whitens averages 24 points, seven rebounds and six assists per game, making 57 percent of his shots from the floor and 78 percent of his free-throw attempts – all while playing an average of 25 minutes and taking only 15 shots per game for a team outscoring opponents 76-39 on average. He’s scored more than 1,100 points in leading North Central to a combined 67-1 record over his first three seasons.

In addition to earning the Associated Press’ 8-player Player of the Year honor in the fall after throwing 45 touchdown passes without an interception, Whitens also plays outfield for the baseball team and high jumps and runs the 400, 800 and on a relay for the track & field team during the spring. Whitens carries a 3.8 grade-point average and is considering a career in marketing. He has a Division II basketball scholarship offer, with Division I programs also interested.

Coach Adam Mercier said: “Players of Jason’s caliber tend to be the focal point on offense by getting shots up, whereas Jason finds the open man and doesn’t worry about individual statistics. He can play any of the five positions on the floor with his size and is a tremendous ball handler capable of running the point position. His athleticism is off the charts, as noticed on the football field being a two-time all-state player at quarterback and wide receiver. Jason is one of the best open court players I’ve ever seen as he has the ability to quickly process all possible options and then either dunk it (he has 12 this season) or make an on-point pass to a teammate. He is a very humble young man who doesn’t let success get to his head. Jason is always willing to help out young students who want to work on their game. My two sons look up to him, along with the other outstanding young men who represent our team. He sets a great example of what being a true student-athlete is all about.”

Performance Point: “Going into the fourth (quarter), I knew I had to step up, being down by 10 to a very good team. But we knew from our past experiences – we’ve got experience in big games, close games – that we had to pull together and get the win. We’re all big competitors in practice and in school, even hanging out. That’s the competitive nature we have, and that just translates to the game.”

42 straight and counting: “We’re just all out here having fun ... and when you’re winning, it makes it 10 times better. We just like to have fun with each other. We’ll have bigger things in life as we go along than a football or basketball game. (So) we just go out, do the best we can, and play the sport we love.” 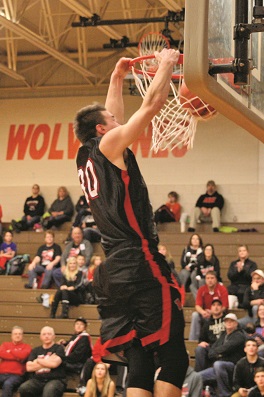 Multi-sport master: “It’s something I’ve done since I was little. I just love playing sports, going out there with my best friends and just competing. We’re all competitive, and that’s the best part – going out and having fun. Morgan Cox … came here freshman year. (Otherwise,) every single one of us has been playing with each other since third and fourth grade. We all know what we like to do on the court, know what spots we like to be in. Each and every one has got my back, and I’ve got theirs.”

Everyone has a part: “We all have our specific roles. We have the jokesters; we’re all pretty funny, or we like to think we’re funny. We know when to get each other up. There’s not a guy that won’t make the other person better. We’re all close-knit, and when the time comes I like to step up, get everybody going. I fall into that leadership role.”

Learning from a leader: “I followed my cousin Rob (Granquist, the previous quarterback) into the leadership role. (He taught me) that whole, ‘Be cool and calm through anything.’ You can’t have ups and downs; you’ve got to stay even keel so when your teammates look at you, you’ve got to look back and let them know everything is all right.”

PHOTOS: (Top) North Central's Jason Whitens launches a jumpshot this season against Big Bay de Noc. (Middle) Whitens throws down one of his many dunks. (Photos courtesy of the Escanaba Daily Press.)