The 6-foot-8 forward had 30 points to lead Quincy past Reading 55-46 on Jan. 8, pushing the Orioles to 9-0 this season while becoming just the third player in program history to go over 1,000 career points. He entered the game needing four to reach the milestone, and he also grabbed 12 rebounds on the way to earning the Michigan Army National Guard “Performance of the Week.”

Over 2½ varsity seasons, Dunn has lead Quincy to a combined 47-10 record, two league titles and a District championship, earning all-state honorable mention from The Associated Press after both of his first two seasons. This winter he’s averaging 25.2 points, 12.1 rebounds, 2.3 assists, 3.4 blocks and 1.2 steals per game, making 55 percent of his shots from the floor and 42 percent of his 3-point tries. Heading into tonight’s game against Concord, Dunn has 1,026 career points, trailing only 1995 graduate Jeff Bell (1,071 points) and 2003 grad Dominic Lopez (1,707) on the school’s all-time scoring list. Both of those players went on to compete at the college level – Bell at Olivet and Lopez at Navy – and Dunn already has scholarship offers from three Division I or II programs, including Division I American University in Washington, D.C.

Dunn has worked over the last year to get stronger and has upped his endurance as well, necessities especially as he deals with two and three defenders at a time aimed at stopping him. He also played football as a freshman and sophomore, making the varsity as a receiver his second season, and carries a 3.2 GPA with history his favorite academic interest. He could help his 380-student high school make some before his career is done; the Orioles are seeking their first Regional title in boys basketball and made the Regional Final his freshman season.

Coach Scott Rodesiler said: “William Dunn is a unique talent who has been on the varsity team since his freshman season. During his first season, you could see that there was something special about him as a player. … (He) brings a unique blend of size, skill, athleticism, work ethic, competitiveness, and unselfishness to our team. Dunn's game is extremely versatile because his skill set allows him to score in so many different ways: fastbreaks, posting up, shooting a 3-pointer, driving to the hoop, shooting a mid-range jumper, (putting back) an offensive rebound, or hitting free throws. You may see him filling a lane on the fastbreak or getting the rebound and leading the fastbreak himself. William is basically a guard in a big man's body. I would not hesitate to play him at point guard if I needed him to do so. His ball handling and vision of the court are outstanding. The great thing about having William on the team is that you always know going into a game that you have a great chance of winning because he is capable of scoring 30+ points, pulling down 15+ rebounds and forcing other teams to change their defensive game plans. ... William's biggest improvement since last season has been his outside shot, in my opinion. Dunn made thousands of shots in the past year to take his game to a new level. He always had a nice shooting stroke, but the work he put in has allowed him to shoot with greater consistency. William has achieved at a high level all while facing double and triple teams, as well as numerous 'junk' defenses. One of his greatest abilities is making the right decisions with the basketball when faced with these types of defenses.”

Performance Point: “I just thought it was pretty cool that I was the third player to get (1,000), and so that means that not many people get that opportunity,” Dunn said. “(Reaching it as a junior) just shows all of the work that I've put in. It's just reflecting that. It's another step to everything that's been going on.”

On the radar, and the map: “It's nice for people to start recognizing some of the stuff that I've been able to do, or some of the stuff that I've accomplished. After my freshman year I had gone to some camps, and some people asked who I was and said they had heard of me. It's funny, because a lot of times they'll ask me where I'm from, and I tell them and they have no clue. They don't know where (Quincy) is. I ask them (if they know) where Coldwater is, because we're right next to that and it's a little bigger town, and if they don't know where that is, I just say it's right next to the Indiana border. ... Sometimes I hold up my hand like the mitten and point to it.” 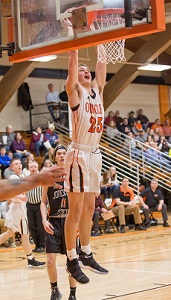 Small town, big support: “It's kinda unique. … It feels like when we do something special, it's means more because it doesn't happen as often. I like the community aspect (of being small-town). Everybody knows you, everywhere you go. You go in town, go out to eat, there's people that you have no clue who they are but they've heard about you, seen you in the newspaper. It's real cool.”

Hard work pays: “It's really exciting to do this for the school and for the town. We work hard. We come into practice every day, practice extremely hard. We bond really well. There's nobody butting heads or anything; we mesh really well.”

School in session: “I’m been thinking about going into education and trying to be a teacher. Both of my parents are teachers; my dad is a weight training teacher and (teaches) health class and personal finance, and my mom is a fifth-grade science teacher. … They’ve always stressed (education), that school always comes first. Sometimes it gets a little hectic, but I've always adjusted to it. I always have known I have to get my work done.”

PHOTOS: (Top) Quincy's William Dunn goes to the basket against Jonesville on Dec. 9. (Middle) Dunn rises to the rim during the 35-29 win. (Photos by Expressions Photography Design.)