The 17-year-old, a forward on the current Wildcats team coached by Stowe, has organized an event for Saturday night that will bring players and coaches off that 1988 squad together for a panel discussion on various topics, including the benefits of playing team sports.

“People still talk about (the state title) a lot,” said Pino. “It’s one of the great things that’s happened in Northport. It’s such a small town.”

Pino, who will be an interviewer, said he’s eager to hear team members talk about life lessons learned that season and what it took to win an MHSAA Finals crown.

“This was a great experience for them, a once-in-a-lifetime opportunity,” he said. “I want (to hear) about the dedication they put into it and the legacy they left behind.”

Audience members will be able to ask questions, too.

The team has had two reunions since claiming the title, but the last was 20 years ago, said Gordie Wick, the coach of the 1988 squad.

“I was wondering who was going to (organize) a reunion or celebration,” said Stowe, who hit the game-winning shot to beat Beal City 80-78 in the Final. “I wasn’t sure how it was going to happen.

“When Ethan suggested he wanted a role as part of his Northport senior project it made a lot of sense. Josh (athletic director Josh Vander Meulen) is his mentor (on the project). I think this is a good opportunity to have those people that were involved in that experience congregate (at the school) for some pointed, and some fun, questions. It will give us a chance to reminisce. Everybody wins.”

Northport seniors are required to complete a project to graduate. There are 17 seniors in this year’s class. Their project topics range from females in the military to drug awareness to the farm-to-table food movement. Pino, who has played five years of varsity soccer and four of varsity basketball, went the sports route. He said playing sports has taught him valuable lessons about teamwork and commitment. Plus, he added, it’s improved his communication, leadership and social skills. And it’s opened the door to lasting friendships, too.

Pino, who hopes to attend Oakland University, was selected as the school’s student athlete of the fall. 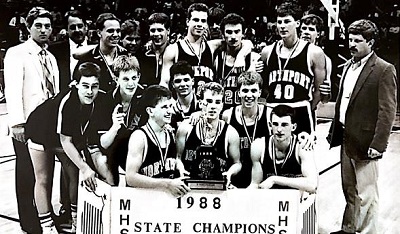 “He wanted to focus on team sports because it’s through his experiences with his teammates that he’s been able to grow,” said Vander Meulen. “Sports are a big part of his life. Ethan’s not a boisterous student. He’s celebrated because he’s a quiet competitor who is dependable and trustworthy. He’s not looking to stand out. He’s not looking for a gold star. When you work with him, you know he’s going to do a good job and you’re going to have fun. You know he won’t let you down.”

The 30-year reunion comes at a rather poignant time. Tonight’s game with Burt Lake Northern Michigan Christian Academy could be the last home game for players wearing Northport uniforms. Because of declining numbers – the high school enrollment is in the 40s - Northport may have to go to a co-op, like it does with neighboring Suttons Bay in soccer and girls basketball. There are currently nine players on varsity, but only three return next season. There is no JV team.

The Wildcats, 10-4, recently clinched the Cherryland Conference title. The team had won eight games in a row before a loss to Traverse City Christian on Wednesday. That was Northport’s first league loss in two years.

“It’s been rewarding to see how far we’ve come since the beginning of the season,” said Pino.

It’s been a hectic winter for Pino – and Vander Meulen, who has helped him pull his senior project together. There are three components to all projects – a research paper, a formal product and a presentation.

“This (projects) gives all of our seniors a chance to dive into something deeper than maybe they’re allowed to in the classroom,” said Vander Meulen.

Saturday’s event will be Pino’s product, although Vander Meulen said he believes “the planning is the product and the event is the cherry.”

“Certainly we want to pull it off and have it be a great night for everyone involved,” he said. “Planning is so important, and hopefully that’s what Ethan takes away from this. It’s the planning that makes it happen – and good planning takes work.”

Pino and Vander Meulen decided in October that the 30th anniversary of Northport’s title would be a perfect tie-in to the project.

“The 1988 team is the vehicle to drive the message of the benefits (of playing team sports) forward,” said Vander Meulen. 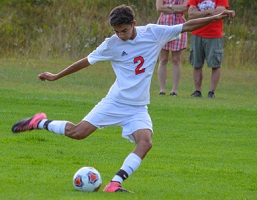 “In our community, they are the team, and that’s capital TEAM. And that’s what this narrative is about. If you ask anybody in our community, who lived here (at that time), they all have a story. To the modern athletes, though, they are mostly unknown so this will be a cool opportunity for our student athletes to see those former players and hear their stories from 30 years ago.”

Several of those players were also part of the school’s Class D championship soccer team in 1986. But it’s that magical March basketball run in 1988 that captured the attention of northern Michigan.

“Football and boys basketball, at least in northern Michigan, drive the dialogue,” said Vander Meulen. “All sports are important and valuable, but public interest in those two can capture a community, ignite not only a town but a region. When I watch highlights of the Buckley boys on the news you can’t see a place to sit. That’s the same energy that was once there with the Northport boys.”

After completing his research paper in late November, Pino reached out to former players and coaches about the idea and to see if they would be able to make it. Seven players and two coaches are planning to attend.

“Some are living out of town and are busy and cannot come,” said Pino. “Some we could not get ahold of. Overall, though, they were pretty excited to hear about it.”

Two dates were considered before Saturday was agreed upon.

When asked how much time he’s put in on the project, Pino paused.

“I think they’ve gone way over the top on this one,” he said.

And they’re still making sure everything is set for Saturday.

“Since we got back from (Christmas) break it’s been logistics, logistics, logistics,” said Vander Meulen. “We don’t want to invite people to Northport and have it be a sloppy presentation. We meet every day. In fact, I don’t know how he feels when he sees me in the hallway now because I always have a new idea. It’s ‘Ethan, we should be tackling this’ or ‘Ethan, did you take care of that?’ We hope we’re not leaving any stone unturned. We feel pretty good, but we’re still turning stones to see if there’s not more we can do.”

PHOTOS: (Top) Northport’s Ethan Pino squares up for a shot during a game this season. (Middle) The 1988 Northport boys basketball team remains legendary in its community. (Below) Pino winds up during this past soccer season. (Top and below photos by Dan Duffiney.)