EAST LANSING – Nick Spitzley, no doubt like the other eight seniors on Pewamo-Westphalia’s basketball team, dreamed growing up of playing for an MHSAA championship.

He needed to use his imagination, since the first and only time the Pirates did play for a Class C title was in 1993, a few years before he was born.

“Obviously we always came out on top,” Spitzley recalled. “Making a lot of shots, and I was always getting pumped up with my team.

“Since I was little, it’s always been a dream, and it’s come true. We’ve been playing together since fifth grade, maybe before that.”

P-W’s seniors are halfway through the final weekend of their high school careers and more than halfway to making that dream come true.

The No. 10-ranked Pirates advanced to Saturday’s Class C final by defeating No. 9 Muskegon Heights 54-44 in the first Semifinal on Thursday at the Breslin Center. P-W’s nine seniors will get to play in the final game of the season for the first time in school history, at 4:30 p.m. against No. 2 Detroit Consortium.

Pewamo-Westphalia will become the second straight team from the Central Michigan Athletic Conference to play for the Class C title, and third in eight seasons. Laingsburg fell in last year’s Final by a point, 40-39, to Flint Beecher. Bath won the Class C title in 2007.

Also from the CMAC, Fulton was Class D runner-up in 2011 and Fowler finished the same in 2002.

The Pirates had to come back over the final minute to beat Beecher in Tuesday’s Quarterfinal, and made it two-for-two against some of the state’s most storied programs by then eliminating Heights, which played in its 22nd Semifinal and fourth over the last five seasons. 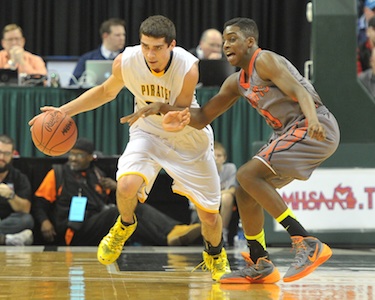 P-W has won 81 percent of its games under coach Luke Pohl during two tenures over a combined 17 seasons. But the Pirates haven't had the chance to add the championship game chapter to their story in more than two decades.

“Knowing we had to beat a team like Flint Beecher and Muskegon Heights, with the history behind those schools, in unbelievable,” Pohl said. “If you follow our league, you’ve seen how many times the league has been here the last 10 years. It’s rock ‘em, sock ‘em basketball in the wintertime, and we’ve got great coaches there – those kind of guys sharpen my skills as a coach. But you’ve gotta have players to win, and we’ve got really good players.”

Spitzley is a four-year starter, one of the top scorers in school history, and did his part Thursday with 22 points and eight rebounds.

But the Semifinal win was truly a full senior effort, as all six players who saw time were 12th graders and a pair added big plays to Spitzley’s game-high scoring surge.

The first came 1 minute, 14 seconds into the second half with the Pirates trailing by a point. Guard Evan Fedewa scored and was fouled on his way to the hoop, and hit the ensuing free throw to give the Pirates a 29-27 lead. They would never trail again.

But Muskegon Heights came close to taking back the lead. The Tigers (20-4) pulled within four with 4:20 to play when P-W center Lane Simon was fouled on a score and also made the following free throw to push the lead back to 46-39 and seemingly drain the last bit of momentum from Heights’ comeback run.

Simon added 17 points, 10 rebounds, and both Fedewa and Kyle Nurenberg grabbed nine rebounds for the Pirates.

Junior Antonio Jones led Muskegon Heights with 16 pints, and senior Eddrick Tornes added 12. Jones made what could be one of the shots of the tournament, a spinning pull-up jumper thrown up without a look at the basket. But overall, his team shot just 24 percent from the floor including 14 percent as P-W pulled away during the second half.

Still, the return run was an accomplishment coach Dalrecus Stewart made sure to note. The Tigers have been here plenty of times, but this one was a little different – the school closed after spring 2012 and re-opened that fall as a public school academy.

“I know (my players) are feeling hurt, but this was a little bit more than a basketball game for us with all of the things that have gone on in our city as well as our school district the last few years,” Stewart said. “The championship they won today was about bringing hope to despair. They are a shining bright spot and what they’ve done is beyond measure. They’re my champions.”

HIGHLIGHTS: (1) Muskegon Heights’ Aaron Sydnor (3) wins the tip-up battle to score late in the first half against Pewamo-Westphalia. (2) Pewamo-Westphalia opened the second half with a 17-3 run. Lane Simon drives for two during that spurt.